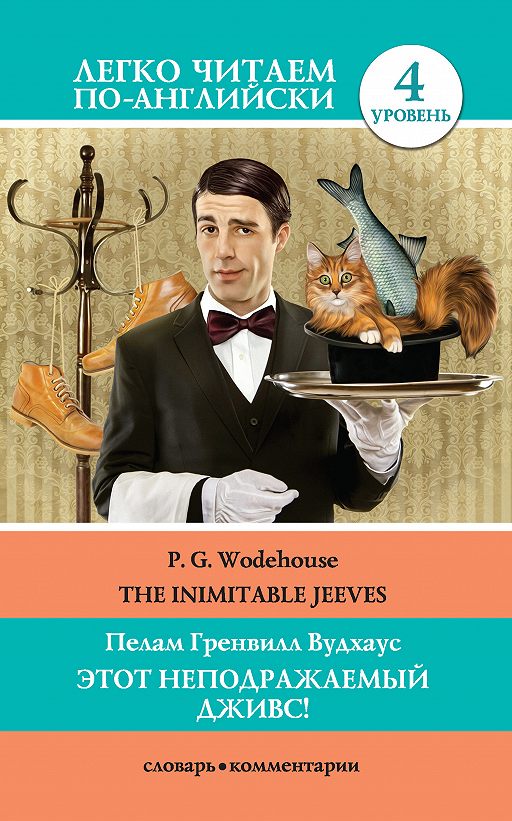 © The Trustees of the P.G. Wodehouse Estate

He put the good old cup of tea softly on the table by my bed, and I took a refreshing sip. Excellent, as usual. Not too hot, not too sweet, not to weak, not too strong, not too much milk, and not a drop spilled in the saucer. A wonderful guy, Jeeves. So competent in every respect. I’ve said it before, and I’ll say it again. Just for example. Every other valet I’ve ever had entered my room in the morning while I was still asleep, but Jeeves seems to know when I’m awake by a sort of telepathy. He always comes in with the cup exactly two minutes after I come to life.

“How is the weather, Jeeves?”

“Anything in the papers?”

“Some crisis in the Balkans[2], sir. Otherwise, nothing.”

“I say, Jeeves, a man I met at the club last night told me to put all my money on Privateer[3] for the two o’clock race this afternoon. How about it?”

That was enough for me. Jeeves knows. How, I couldn’t say, but he knows. There was a time when I would laugh lightly, and go ahead, and lose everything, but not now.

“By the way,” I said, “have those mauve shirts I ordered arrived yet?”

Well, I must say I bow to superior knowledge. Weak? I don’t know. Most fellows, no doubt, are sure that their valets must only crease trousers and so on; but it’s different with Jeeves. Right from the first day he came to me, I have looked on him as a sort of guide, philosopher, and friend.

“Mr. Little[4] rang up on the telephone a few moments ago, sir. I informed him that you were not yet awake.”

“Did he leave a message?”

“No, sir. He mentioned that he had a matter of importance to discuss with you, but gave no details.”

To be honest, I wasn’t excited to see him. Bingo[5] Little is a fellow I was at school with, and we see each other often. He’s the nephew of old Mortimer[6] Little, who retired from business recently with a lot of money. Bingo wandered about London, his uncle gave him enough money, and led a fairly unclouded life. I suspected that he had discovered some new brand of cigarette which he wanted me to try, or something like that.

After breakfast I lit a cigarette and went to the open window. It certainly was one a bright day. “Jeeves,” I said.

“You were absolutely right about the weather. It is a nice morning.”

“Spring and all that.”

“In the spring, Jeeves, flowers grow and birds sing.”

“Exactly! Then bring me my cane, my yellowest shoes, and the old green hat. I’m going into the park.”

I don’t know if you know that sort of feeling you get on these days in the end of April and in the beginning of May, when the sky is blue, with cotton-wool clouds, and there’s a breeze blowing from the west? Romantic, if you know what I mean. On this particular morning it seemed to me that what I really wanted was some charming girl to ask me to save her from assassins or something. So that it was rather terrible when I suddenly ran into[7] Bingo Little, in a crimson satin tie decorated with horseshoes.

He seemed embarrassed, so I dropped the subject[9]. We walked a bit, and sat down on a couple of chairs by the Serpentine[10].

“Jeeves tells me you want to talk to me about something,” I said.

I waited for the news, but he didn’t seem to go on. Conversation languished. He stared straight ahead of him.

“I say, Bertie,” he said, after a pause of about an hour and a quarter.

“You don’t think there’s a kind of music in the word, like the wind through the trees?”

He seemed disappointed for a moment; then cheered up.

“Of course, you wouldn’t. You always were a worm without any soul, weren’t you?”

For I realized now that poor old Bingo had fallen in love again. Ever since I have known him—and we were at school together—he has been perpetually falling in love with someone, generally in the spring. At school he had the finest collection of actresses’ photographs of his time; and at Oxford he was famous for his romantic nature.

“You’d better come along and meet her at lunch,” he said, looking at his watch.

He was geographically accurate. About fifty yards east of the Ritz there is a tea-and-bun shop[13], and into this young Bingo dived like a rabbit. Before I had time to say a word we were at a table, with a pool of coffee left there by a previous client.

I couldn’t quite understand the situation. Bingo was not a millionaire, but he has always had a fair amount. Why, then, has he invited the girl at this eatery?

The waitress arrived. A rather pretty girl.

“Aren’t we going to wait?” I started to say to Bingo, but I caught sight of his face, and stopped.

“Mabel,” said Bingo, “this is Bertie Wooster, a friend of mine.”

“Pleased to meet you,” she said. “Nice morning.”

“It suits you beautiful,” said the girl.

Personally, if anyone had told me that a tie like that suited me, I should have risen and fight them, regardless of their age and sex; but poor old Bingo simply got all flustered with gratification[14], and smirked.

“Well, what’s it going to be today?” asked the girl. Bingo studied the menu.

“I’ll have a cup of cocoa, cold veal and ham pie, slice of fruit cake, and a macaroon. Same for you, Bertie?”

I gazed at him, revolted. He thinks I am going to insult my stomach with that! And he has been a friend of mine all these years.

“Or how about a bit of hot steak-pudding[15], with some wine?” said Bingo.

You know, love can change a man completely. This fellow before me, who spoke carelessly of macaroons and cocoa, was the man who had ordered sole frite au gourmet aux champignons and the best wine some day. Ghastly! Ghastly!

A roll and butter and a small coffee seemed the only things on the list that were eatable, so I chose them, and Mabel went away.

He wanted my opinion of the female poisoner[16] who had just left us.

“You don’t think she’s the most wonderful girl you ever saw?” he said.

“What were you doing at a subscription dance at Camberwell?”

“Your Jeeves asked me to buy a couple of tickets. It was in aid of some charity or other.”

“Jeeves? I didn’t know about that business of his.”

“Well, I suppose he has to relax a bit every sometimes. Anyway, he was there, too. And danced. I didn’t want to dance at first, but changed my mind. Oh, Bertie, think what I might have missed[19]!”

“Mabel, you fool. If I hadn’t gone I shouldn’t have met Mabel.”

“At least, not your advice, because that wouldn’t be good to anybody. Not that I want to hurt your feelings, of course.”

“What I wish you would do is to tell the whole story to that fellow Jeeves, and see what he suggests. You’ve often told me that he has helped other friends of yours. From what you tell me, he’s the brains of the family. Tell him about my problem.”

“Why, you idiot, my uncle, of course. What do you think my uncle’s going to say to all this? If I tell him about the marriage, he’d die at once.”

“One of these emotional guys, eh?”

“He needs to be prepared to receive the news. But how?”

“You see, I’m dependent on my uncle. So tell Jeeves the case. Tell him my future is in his hands, and that, if the wedding bells ring out, he can rely on me, even unto half my kingdom. Well, ten pounds. So, will he help me for ten pounds?”

I wasn’t surprised that Bingo wanted to tell Jeeves his private affairs like this. It was the first thing I would do myself. As I have observed, Jeeves is full of bright ideas. If anybody could fix things for poor old Bingo, he could.

I stated the case to him[20] that night after dinner.

“Are you busy just now?”

“I mean, not doing anything in particular?”

“No, sir. Usually at this hour I read useful books; but, if you desire my services, this can easily be postponed.”

“Well, I want your advice. It’s about Mr Little.”

“Young Mr Little, sir, or the elder Mr Little, his uncle, who lives in Pounceby Gardens[21]?”

Jeeves seemed to know everything. Amazing. I’d known Bingo practically all my life, and yet I didn’t know where his uncle lived.

“How did you know he lived in Pounceby Gardens?” I said.

“Do you mean you’re engaged?”

“She is a remarkably excellent cook, sir,” said Jeeves, as though he had to give some explanation. “What was it you wished to ask me about Mr Little?”

I gave him the details.

“And that’s it, Jeeves,” I said. “I think we must help poor old Bingo. Tell me about old Mr Little. What sort of a man is he?”

“A somewhat curious character, sir. He retired from business and became a great recluse, and now devotes himself almost entirely to the pleasures of the table.”

“I would not, perhaps, take the liberty of describing him in precisely those terms, sir. He is what is usually called a gourmet. Very particular about what he eats, and for that reason values Miss Watson’s services.”

“Well, it seems to me that our best plan would be to tell him everything after dinner one night. He will be in a good mood, and all that.”

“The difficulty is, sir, that at the moment Mr Little is on a diet, because of an attack of gout.”

“Nephew’s devotion, you mean? The old man will be touched, right?”

“Partly that[22], sir. But I would rely more on young Mr Little’s choice of literature.”

“That’s no good. Bingo is a good fellow, but when it conies to literature he stops at the Sporting Times[23].”

“That difficulty may be overcome. I would be happy to select books for Mr Little to read. Perhaps I might explain my idea a little further.”

“I can’t say I quite understand.”

“The method which I advocate is what, I believe, they call Direct Suggestion[24], sir. You may have had experience of the system?”

“You mean they keep on telling you that some soap or other is the best, and after a while you come under the influence and buy twenty pieces?”

“Exactly, sir. The same method was the basis of all the most valuable propaganda during the recent war. I see no reason why it should not be adopted by us to get the desired result with regard to the subject’s views on class distinctions[25]. If young Mr Little reads day after day to his uncle a series of stories in which marriage with young persons of an inferior social status was appropriate and admirable, I think it will prepare the elder Mr Little’s mind for the reception of the information that his nephew wishes to marry a waitress in a tea-shop.”

“Are there any books of that sort nowadays? The only ones I ever see mentioned in the papers are about married couples who hate each other.”

“I have an aunt, sir, who owns an almost complete set of Rosie M. Banks. I could easily borrow as many volumes as young Mr Little might require.”

“I should certainly recommend the scheme, sir.”

“All right, then. Go to your aunt tomorrow and grab a couple of the best stories. We shall try.”