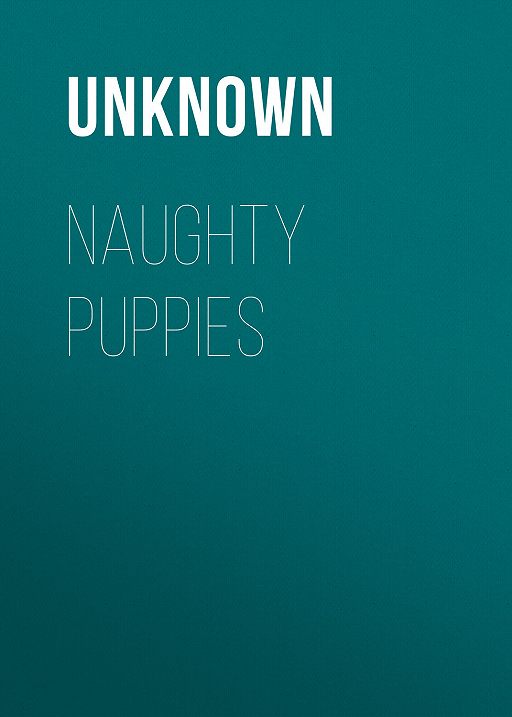 Tiny and his Parents


There were two little puppy dogs,
“Tiny” named, and “Toodles,”
Who got into all kinds of scrapes,
Like little foolish noodles.


Tiny was a brownish dog,
And Toodles was a white one;
And Tiny had a cunning eye,
And Toodles had a bright one.


Tiny played all kinds of tricks.
For which his parents chid him:
And Toodles did—poor, foolish pup—
Whatever Tiny bid him. 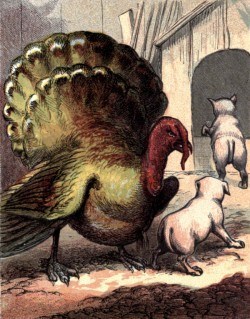 Tiny, Toodles, and the Turkey


“Come, Toodles,” Tiny said, one day,
“It's bright and pleasant weather,
We'll go and fight the turkey-cock:”
And off they went together.


But all their courage oozed away,
When the turkey-cock said “Gobble;”
They both turned tail, and scampered off,
As fast as they could toddle.


But turkey caught them up at last,
And read them both a lecture;
And how he served them with his beak,
I leave you to conjecture.


So home they went with drooping tails,
And pace so lame and jerky,
And said, “Next time we'll tease the hens,
And leave alone the turkey.” 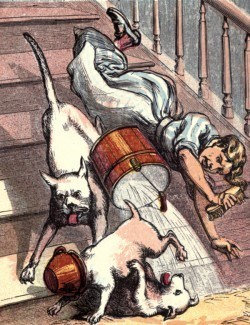 New Mischief done by the Puppies


The visits to the poultry-yard,
Of Tiny and of Toodles,
Soon brought on their papa a call
Of Master Cockadoodle's.


He said, “My hens can't lay an egg,
Though once I had a case full;
Because your puppies frighten them—
It's wicked, it's disgraceful!


“But let them venture once again,
My hens to chase and worry,
And I'll receive them in a way
Shall make them sad and sorry.”


Toodles heard this, and crept away,
And in the straw lay quiet;
But Tiny yelled till the cock marched off,
Disgusted with the riot.

Tiny and Toodles behave worse than ever


From bad to worse went these naughty pups—
It's almost past believing,
But yet, I assure you, 'tis a fact,
That now they took to thieving.


They soon fell into bad company;
And certain unprincipled poodles,
And idle mongrels, and bob-tailed curs,
Were the consorts of Tiny and Toodles.


They let these bad dogs into the house,
Where a pot of milk was standing;
In quest of which they scampered upstairs,
As far as the first-floor landing.


But Betty, the cook, was scrubbing the stairs,
With a mop and a pail of water;
And Tiny ran off, with his head in the pot,
While the rest yelled out for quarter. 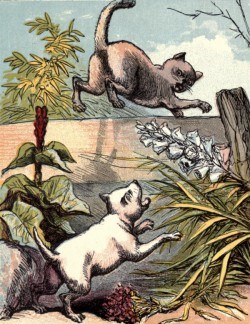 How Tiny hunted the Cat, and what he got by it


Now little Miss Jane had a Persian cat.
Whose fur was soft and silky;
Whose tail was long, and whose eyes were blue,
And whose color was white and milky.


This was a quiet, good-natured cat.
And Master Tiny knew it;
He said, “I'll frighten her out of her wits:
Just watch me, Toodles—I'll do it.”


So he ran at Puss, with a yelp and a snap,
As fast as he was able;
Across the paddock, and through the yard,
And over the fence by the stable.


But Puss turned suddenly, scratched his nose,
And set him yelling and weeping;
And Tiny owned, with a rueful face,
That he wished he'd left her sleeping. 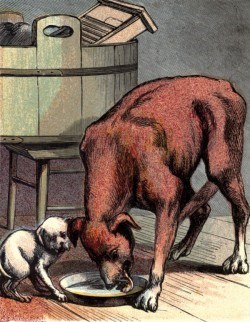 What happened to Tiny and Toodles


Punishment follows folks who play tricks,
Although they hope to keep clear of it:
The puppies' bad conduct was told papa,
Who was mightily grieved to hear of it.


For papa was a grave, respectable dog,
Faithful, and full of affection;
And the farmyard was safe from robbers by night,
Under his steady protection.


So he said: “To cure you of pranks like these,
I condemn each little sinner,
To stand and look on for three whole days,
While I eat up his dinner.


“And to show you I mean to mend your ways,
By every means in my power,
You shall both learn, ‘How doth the busy bee
Improve each shining hour.’”