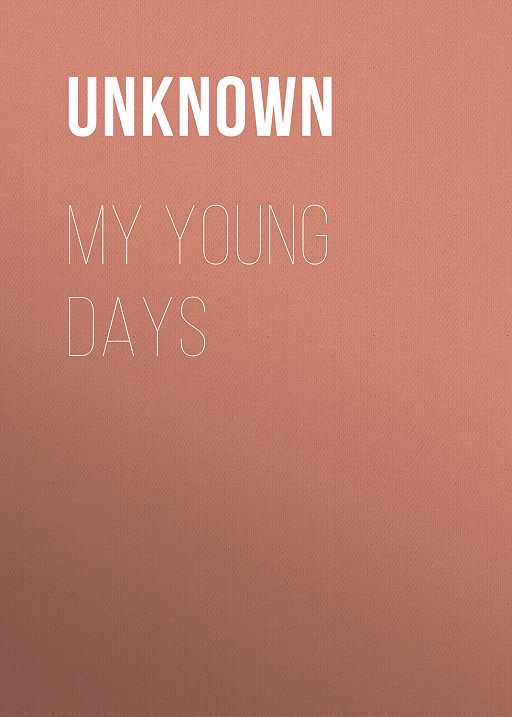 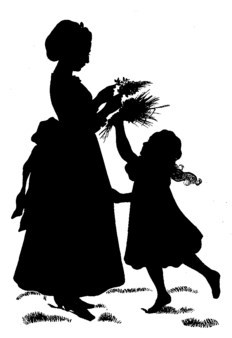 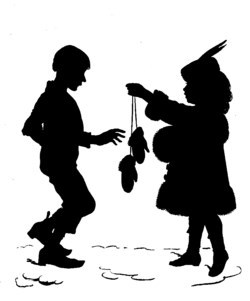 How many times in my life, I wonder, have these words come rushing up from the very bottom of my heart, tumbling everything out of the way, never listening to reason, never stopping for thought? How many times since that dreary afternoon in the great, big drawing-room at grandmamma's? And, oh dear me! what miserable heartache comes before that fearful want! Oh, grown-up people, don't you know how sour everything tastes, and how yellow everything looks, and how sick everything makes one, when one wants to go home?

So it was that one wretched day. How well I remember it all! The large, large drawing-room so full of cushions, couches, easy-chairs, little tables covered with funny knick-knacks, marble-slabs and more knick-knacks, beautiful fire-screens, large mirrors, soft fur lying about on the floor, and many-coloured antimacassars on the chairs. By and by, all these wonders had happy memories pinned on to them, of uproarious games with merry little play-fellows. Now, I was all alone, and very lonely, in it all. True, there was grandmamma nodding in her easy-chair, in the firelight, on one side, and there was Uncle Hugh reading the "Times" by the same light on the other. But what were either of them to the little tired stranger on the low stool between them? Once grandmamma's eyes had opened just to look at me, and say, "Making pretty pictures of the red coals, my dearie?"

And Uncle Hugh had answered, "Yes, to be sure; dreaming of the King of Salamanders!"

And they went to sleep again or went on reading, and the little company smile faded away from my face, and I went back to those very real dreams of the nursery at home, and baby there, and little brother, and papa and mamma, and the long time ago, hours and hours ago! when I said good-bye, and Bobbie kissed his hand out of window, and the carriage took me off—a happy little woman, really going in the puff-puff! Oh, how could I ever have felt so happy then and be so miserable now? Had I ever thought that I was coming away from them all, with nobody at all but Jane, the new nursemaid, to take care of me? Had I ever thought how quite alone I should be, never able to find my way in this great, big house, sure to get lost in some of the passages? And how could I ever go to sleep without Bobbie close by, and wouldn't Bobbie cry for me at home? And oh, nurse wouldn't be there to tuck me up, and perhaps grandmamma wouldn't like the candle left! And who would give me my good-night kiss like,—like,—oh, oh, like– But it would come, that great big sob, it wasn't any use to choke it back! And, when it had come, of course, it was all over with me, and there was nothing for it but to cry out just as if I was not in that grand drawing-room—

What a disturbance that cry of mine did make, to be sure! Grandmamma was wide-awake in a moment, looking very much distressed, and laying her hand on the bell. This troubled me very much; for hadn't Jane told me when she brushed my hair and made me tidy, that I was to go down and be a good girl, "and do things pretty" in the drawing-room, and would she scold me if I was sent away for crying and making a noise? But Uncle Hugh came to my rescue, threw away his paper, and cuddled me up in his great strong arms almost like papa. And he showed me his watch, and made it strike, and then began to show me all kinds of wonders about the room: little tiny black men under a glass case, small china monkeys, cats and frogs, and funny shells and fishes, and snakes' skins, and lots of other things. And after that we came back to the easy-chair, and he sang me sailors' songs, and told me all about "The House that Jack built!" 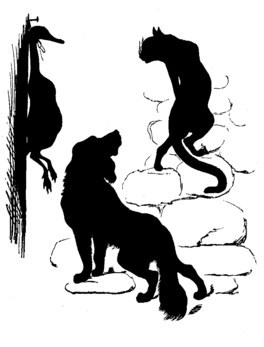 THE CAT THAT WANTED THE GOOSE.

But "Good night, Uncle Hugh, there's Jane come to fetch Miss Sissy to her tea, upstairs in the nursery."

Yes, tea alone in the nursery, that strange room that looked as if it hadn't been a nursery for a great many years, and was as queer and awkward as an old woman trying to look young again. No clatter of spoons to make baby laugh, no chatter of childish voices, only little me, all alone with Jane—little me, so puzzled and strange and bewildered in the new place! Perhaps Jane thought me dull, for she talked away fast enough, about that dear old lady, my grandmamma, and about the beautiful place we were in, and what if Master Bobbie should grow up some day to find it all his own, and be the lord of it all. I didn't care much if he did; I only wanted him now, little boy as he was, to put his fat arms round my neck, for I was "little sister" to nobody here; it was mere mockery calling me "Miss Sissy" all the time. Perhaps Jane heard the sigh, for she stopped afterwards in the middle of her long story about the little cousins from over the sea, that were coming here in a day or two. She had me on her lap, and she was just taking off my shoes and socks, but she drew my head to her shoulder, and told me that I had "Janie-panie" with me, who was always going to take care of me all the time. I was very tired, and my eyes went shut on the pillow after that, before they had time to cry home-sick tears. And next day there were so many new things to see; two little puppies to make friends with, beside the parrot and pussy.

But I mustn't begin to tell you all the things that happened that day. You see, I have made quite a long story of my first evening, so you must try and fancy all about the walk in the park with Jane, and the drive with Grandmamma to the town, and the toy-shop, and what we bought there.

When we came home it was my tea-time; and after that Jane changed my frock, and did my hair, and took me down to dessert, in the dining-room. Ah, then the shy fit came on, and I bent my head very gravely to take the sweet bits off Uncle Hugh's fork, I remember. But when he had pushed back his chair, given his arm to grandmamma, and his hand to me, and taken us into the drawing-room—then, while he made me nestle down on his knee in the soft easy-chair, all my shyness went away at the look of his merry eyes.

"Now for the goose that Jack killed," he said; and then and there began the funniest story you ever heard. Only I can't tell it in the funny words and with the merry, twinkling glances he gave me. 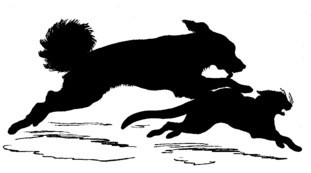 THE DOG THAT CHASED THE CAT.

It was when Uncle Hugh was a middy, and he had been sailing in a great big ship ever so long, till at last they came to some foreign country, I don't know where. Well, Uncle Hugh and his friend Jack Miller went roaming about, very glad to get off the sea. They took possession of a little empty hut on the beach, and spent some of the time there, and some of the time roaming about on the hills. Now it chanced, one day, that they saw a flock of wild geese flying over the shore. Jack had a gun with him, and he instantly shot one of these geese. Uncle Hugh says they had had so much salt meat at sea, that they smacked their lips to think of a nice fat goose for dinner. So they carried it off to their hut, and then they pulled off all the feathers one by one, and made it quite ready to cook. What funny cooks they must have been! But it wasn't quite time to roast it, so they tied it up by a string to the door and went away, leaving the captain's dog, Neptune, to watch it. 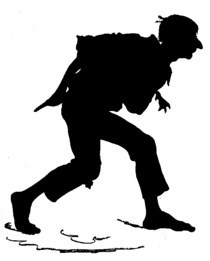 THE THIEF THAT STOLE THE GOOSE.

Now, Nep was a very funny dog—a nervous dog, Uncle Hugh called him—and he was quite afraid something would happen. By and by, poor pussy came to have a peep at the goosey-gander, and she climbed up the steps on tip-toe just to look. Nep watched her, and didn't feel easy in his mind, and when poor pussy just stretched forward her head (because she was a little short-sighted, I dare say), Nep could bear it no longer. He gave a great loud bark, and flew along the road after the wretched, flying cat.