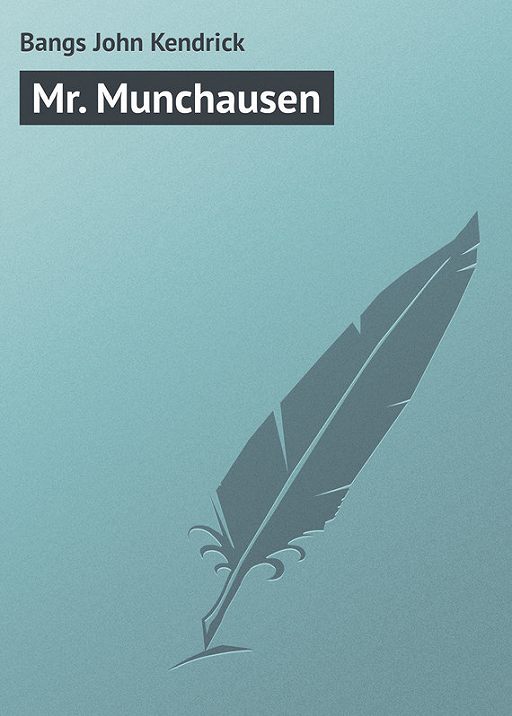 “Good morning, Mr. Munchausen,” said the interviewer of the Gehenna Gazette entering the apartment of the famous traveller at the Hotel Deville, where the late Baron had just arrived from his sporting tour in the Blue Hills of Cimmeria and elsewhere.

“The interests of truth, my dear Ananias,” replied the Baron, grasping me cordially by the hand, “require that I should state it as my opinion that it is not a good morning. In fact, my good friend, it is a very bad morning. Can you not see that it is raining cats and dogs without?”

“Sir,” said I with a bow, “I accept the spirit of your correction but not the letter. It is raining indeed, sir, as you suggest, but having passed through it myself on my way hither I can personally testify that it is raining rain, and not a single cat or canine has, to my knowledge, as yet fallen from the clouds to the parched earth, although I am informed that down upon the coast an elephant and three cows have fallen upon one of the summer hotels and irreparably damaged the roof.”

“It is curious, Ananias,” said he, “what sticklers for the truth you and I have become.”

“It is indeed, Munchausen,” I returned. “The effects of this climate are working wonders upon us. And it is just as well. You and I are outclassed by these twentieth century prevaricators concerning whom late arrivals from the upper world tell such strange things. They tell me that lying has become a business and is no longer ranked among the Arts or Professions.”

“Ah me!” sighed the Baron with a retrospective look in his eye, “lying isn’t what it used to be, Ananias, in your days and mine. I fear it has become one of the lost arts.”

“I have noticed it myself, my friend, and only last night I observed the same thing to my well beloved Sapphira, who was lamenting the transparency of the modern lie, and said that lying to-day is no better than the truth. In our day a prevarication had all of the opaque beauty of an opalescent bit of glass, whereas to-day in the majority of cases it is like a great vulgar plate-glass window, through which we can plainly see the ugly truths that lie behind. But, sir, I am here to secure from you not a treatise upon the lost art of lying, but some idea of the results of your sporting tour. You fished, and hunted, and golfed, and doubtless did other things. You, of course, had luck and made the greatest catch of the season; shot all the game in sight, and won every silver, gold and pewter golf mug in all creation?”

“You speak truly, Ananias,” returned Mr. Munchausen. “My luck was wonderful – even for one who has been so singularly fortunate as I. I took three tons of speckled beauties with one cast of an ordinary horse whip in the Blue Hills, and with nothing but a silken line and a minnow hook landed upon the deck of my steam yacht a whale of most tremendous proportions; I shot game of every kind in great abundance and in my golf there was none to whom I could not give with ease seven holes in every nine and beat him out.”

“Seven?” said I, failing to see how the ex-Baron could be right.

“Seven,” said he complacently. “Seven on the first, and seven on the second nine; fourteen in all of the eighteen holes.”

“But,” I cried, “I do not see how that could be. With fourteen holes out of the eighteen given to your opponent even if you won all the rest you still would be ten down.”

“True, by ordinary methods of calculation,” returned the Baron, “but I got them back on a technicality, which I claim is a new and valuable discovery in the game. You see it is impossible to play more than one hole at a time, and I invariably proved to the Greens Committee that in taking fourteen holes at once my opponent violated the physical possibilities of the situation. In every case the point was accepted as well taken, for if we allow golfers to rise above physical possibilities the game is gone. The integrity of the Card is the soul of Golf,” he added sententiously.

“Tell me of the whale,” said I, simply. “You landed a whale of large proportions on the deck of your yacht with a simple silken line and a minnow hook.”

“Well it’s a tough story,” the Baron replied, handing me a cigar. “But it is true, Ananias, true to the last word. I was fishing for eels. Sitting on the deck of The Lyre one very warm afternoon in the early stages of my trip, I baited a minnow hook and dropped it overboard. It was the roughest day at sea I had ever encountered. The waves were mountain high, and it is the sad fact that one of our crew seated in the main-top was drowned with the spray of the dashing billows. Fortunately for myself, directly behind my deck chair, to which I was securely lashed, was a powerful electric fan which blew the spray away from me, else I too might have suffered the same horrid fate. Suddenly there came a tug on my line. I was half asleep at the time and let the line pay out involuntarily, but I was wide-awake enough to know that something larger than an eel had taken hold of the hook. I had hooked either a Leviathan or a derelict. Caution and patience, the chief attributes of a good angler were required. I hauled the line in until it was taut. There were a thousand yards of it out, and when it reached the point of tensity, I gave orders to the engineers to steam closer to the object at the other end. We steamed in five hundred yards, I meanwhile hauling in my line. Then came another tug and I let out ten yards. ‘Steam closer,’ said I. ‘Three hundred yards sou-sou-west by nor’-east.’ The yacht obeyed on the instant. I called the Captain and let him feel the line. ‘What do you think it is?’ said I. He pulled a half dozen times. ‘Feels like a snag,’ he said, ‘but seein’ as there ain’t no snags out here, I think it must be a fish.’ ‘What kind?’ I asked. I could not but agree that he was better acquainted with the sea and its denizens than I. ‘Well,’ he replied, ‘it is either a sea serpent or a whale.’ At the mere mention of the word whale I was alert. I have always wanted to kill a whale. ‘Captain,’ said I, ‘can’t you tie an anchor onto a hawser, and bait the flukes with a boa constrictor and make sure of him?’ He looked at me contemptuously. ‘Whales eats fish,’ said he, ‘and they don’t bite at no anchors. Whales has brains, whales has.’ ‘What shall we do?’ I asked. ‘Steam closer,’ said the Captain, and we did so.”

Munchausen took a long breath and for the moment was silent.