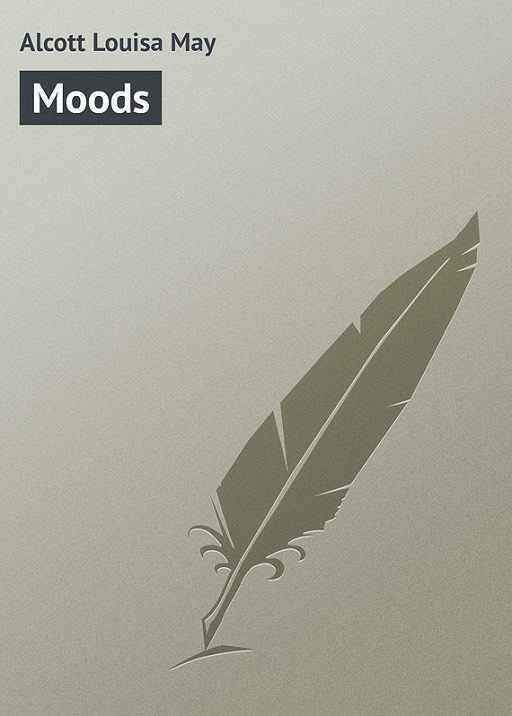 "Life is a train of moods like a string of beads; and as we pass through them they prove to be many colored lenses, which paint the world their own hue, and each shows us only what lies in its own focus."

CHAPTER I.
IN A YEAR

The room fronted the west, but a black cloud, barred with red, robbed the hour of twilight's tranquil charm. Shadows haunted it, lurking in corners like spies set there to watch the man who stood among them mute and motionless as if himself a shadow. His eye turned often to the window with a glance both vigilant and eager, yet saw nothing but a tropical luxuriance of foliage scarcely stirred by the sultry air heavy with odors that seemed to oppress not refresh. He listened with the same intentness, yet heard only the clamor of voices, the tramp of feet, the chime of bells, the varied turmoil of a city when night is defrauded of its peace by being turned to day. He watched and waited for something; presently it came. A viewless visitant, welcomed by longing soul and body as the man, with extended arms and parted lips received the voiceless greeting of the breeze that came winging its way across the broad Atlantic, full of healthful cheer for a home-sick heart. Far out he leaned; held back the thick-leaved boughs already rustling with a grateful stir, chid the shrill bird beating its flame-colored breast against its prison bars, and drank deep draughts of the blessed wind that seemed to cool the fever of his blood and give him back the vigor he had lost.

A sudden light shone out behind him filling the room with a glow that left no shadow in it. But he did not see the change, nor hear the step that broke the hush, nor turn to meet the woman who stood waiting for a lover's welcome. An indefinable air of sumptuous life surrounded her, and made the brilliant room a fitting frame for the figure standing there with warm-hued muslins blowing in the wind. A figure full of the affluent beauty of womanhood in its prime, bearing unmistakable marks of the polished pupil of the world in the grace that flowed through every motion, the art which taught each feature to play its part with the ease of second nature and made dress the foil to loveliness. The face was delicate and dark as a fine bronze, a low forehead set in shadowy waves of hair, eyes full of slumberous fire, and a passionate yet haughty mouth that seemed shaped alike for caresses and commands.

A moment she watched the man before her, while over her countenance passed rapid variations of pride, resentment, and tenderness. Then with a stealthy step, an assured smile, she went to him and touched his hand, saying, in a voice inured to that language which seems made for lovers' lips —

"Only a month betrothed, and yet so cold and gloomy, Adam!"

With a slight recoil, a glance of soft detestation veiled and yet visible, Warwick answered like a satiric echo —

"Only a month betrothed, and yet so fond and jealous, Ottila!"

Unchilled by the action, undaunted by the look, the white arm took him captive, the beautiful face drew nearer, and the persuasive voice asked wistfully —

"Was it of me you thought when you turned with that longing in your eye?"

"Was it of a fairer or a dearer friend than I?"

The black brows contracted ominously, the mouth grew hard, the eyes glittered, the arm became a closer bond, the entreaty a command.

She laughed low to herself, and the mobile features softened to their former tenderness as she looked up into that other face so full of an accusing significance which she would not understand.

"I have waited two long hours; have you no kinder greeting, love?"

"I have no truer one. Ottila, if a man has done unwittingly a weak, unwise, or wicked act, what should he do when he discovers it?"

"Repent and mend his ways; need I tell you that?"

"I have repented; will you help me mend my ways?"

"Confess, dear sinner; I will shrive you and grant absolution for the past, whatever it may be."

"How much would you do for love of me?"

"Anything for you, Adam."

"Then give me back my liberty."

He rose erect and stretched his hands to her with a gesture of entreaty, an expression of intense desire. Ottila fell back as if the forceful words and action swept her from him. The smile died on her lips, a foreboding fear looked out at her eyes, and she asked incredulously —

If he had lifted his strong arm and struck her, it would not have daunted with such pale dismay. An instant she stood like one who saw a chasm widening before her, which she had no power to cross. Then as if disappointment was a thing impossible and unknown, she seized the imploring hands in a grasp that turned them white with its passionate pressure as she cried —

"No, I will not! I have waited for your love so long I cannot give it up; you shall not take it from me!"

But as if the words had made the deed irrevocable, Warwick put her away, speaking with the stern accent of one who fears a traitor in himself.

"I cannot take from you what you never had. Stand there and hear me. No; I will have no blandishments to keep me from my purpose, no soft words to silence the hard ones I mean to speak, no more illusions to hide us from each other and ourselves."

"Better seem cruel than be treacherous; better wound your pride now than your heart hereafter, when too late you discover that I married you without confidence, respect, or love. For once in your life you shall hear the truth as plain as words can make it. You shall see me at my best as at my worst; you shall know what I have learned to find in you; shall look back into the life behind us, forward into the life before us, and if there be any candor in you I will wring from you an acknowledgment that you have led me into an unrighteous compact. Unrighteous, because you have deceived me in yourself, appealed to the baser, not the nobler instincts in me, and on such a foundation there can be no abiding happiness."

"Go on, I will hear you." And conscious that she could not control the will now thoroughly aroused, Ottila bent before it as if meekly ready to hear all things for love's sake.

A disdainful smile passed over Warwick's face, as with an eye that fixed and held her own, he rapidly went on, never pausing to choose smooth phrases or soften facts, but seeming to find a relish in the utterance of bitter truths after the honeyed falsehood he had listened to so long. Yet through all the harshness glowed the courage of an upright soul, the fervor of a generous heart.

"I know little of such things and care less; but I think few lovers pass through a scene such as this is to be, because few have known lives like ours, or one such as we. You a woman stronger for good or ill than those about you, I a man untamed by any law but that of my own will. Strength is royal, we both possess it; as kings and queens drop their titles in their closets, let us drop all disguises and see each other as God sees us. This compact must be broken; let me show you why. Three months ago I came here to take the chill of an Arctic winter out of blood and brain. I have done so and am the worse for it. In melting frost I have kindled fire; a fire that will burn all virtue out of me unless I quench it at once. I mean to do so, because I will not keep the ten commandments before men's eyes and break them every hour in my heart."

He paused a moment, as if hotter words rose to his lips than generosity would let him utter, and when he spoke again there was more reproach than anger in his voice.

"Ottila, till I knew you I loved no woman but my mother; I wooed no wife, bought no mistress, desired no friend, but led a life austere as any monk's, asking only freedom and my work. Could you not let me keep my independence? Were there not men enough who would find no degradation in a spiritual slavery like this? Would nothing but my subjection satisfy your unconquerable appetite for power?"

"Yes! Not openly, I grant, your art was too fine for that; you shunned me that I might seek you to ask why. In interviews that seemed to come by chance, you tried every wile a woman owns, and they are many. You wooed me as such as you alone can woo the hearts they know are hardest to be won. You made your society a refreshment in this climate of the passions; you hid your real self and feigned that for which I felt most honor. You entertained my beliefs with largest hospitality; encouraged my ambitions with a sympathy so genial that I thought it genuine; professed my scorn for shammery, and seemed an earnest woman, eager to find the true, to do the right; a fit wife for any man who desired a helpmate, not a toy. It showed much strength of wit and will to conceive and execute the design. It proved your knowledge of the virtues you could counterfeit so well, else I never should have been where I am now."

"Your commendation is deserved, though so ungently given, Adam."

"There will be no more of it. If I am ungentle, it is because I despise deceit, and you possess a guile that has given me my first taste of self-contempt, and the draught is bitter. Hear me out; for this reminiscence is my justification; you must listen to the one and accept the other. You seemed all this, but under the honest friendliness you showed lurked the purpose you have since avowed, to conquer most entirely the man who denied your right to rule by the supremacy of beauty or of sex alone. You saw the unsuspected fascination that detained me here when my better self said 'Go.' You allured my eye with loveliness, my ear with music; piqued curiosity, pampered pride, and subdued will by flatteries subtly administered. Beginning afar off, you let all influences do their work till the moment came for the effective stroke. Then you made a crowning sacrifice of maiden modesty and owned you loved me."

Shame burned red on Ottila's dark cheek, and ire flamed up in her eyes, as the untamable spirit of the woman answered against her will —

"It was not made in vain; for, rebellious as you are, it subdued you, and with your own weapon, the bare truth."

He had said truly, "You shall see me at my best as at worst." She did, for putting pride underneath his feet he showed her a brave sincerity, which she could admire but never imitate, and in owning a defeat achieved a victory.