West winds of infinity. An addition to the rule of the Nagual of Carlos Castaneda 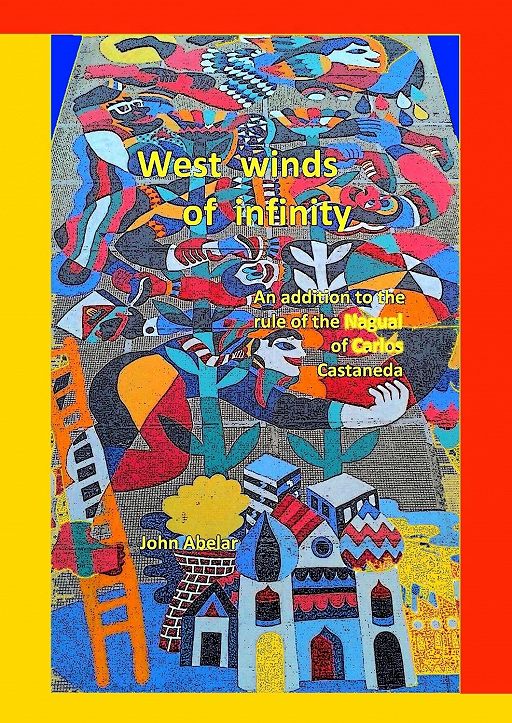 West winds of infinity. An addition to the rule of the Nagual of Carlos Castaneda
John Abelar

Winds from different directions insensibly bring different energy winds of infinity that permeate and change everything. In people it cause a subtle change of perception, which can be noticed under the condition of the second attention. Change of perception changes the thoughts and desires of the person, his mood, opportunities and even environment. Everyone can notice it, calmed down in the depth of self and transferred attention from thoughts and experiences to outside at the same time watching for what is happening here and now and own internal state. Every person and every object in our material world are associated with a certain direction and the wind of infinity. This leading wind determines the way of life of man, his relationships and perso-nality, gives him strength and confidence. Carlos Castaneda has des-cribed four winds corresponding to the four types of female persona-lities. In total there are 16 winds of infinity corresponding to the 16 warriors in the party of the Nagual. Men also have own winds: North-West match the man behind the scene, North-East – scientist, South-West – the man of action, South-East – the assistant.

The book describes how you can find your wind and determine your direction. There is the practical method of transition in a strong state during the abstract journey at which turns on the second attention, caught the energy wind. Found the link between directions of the wind and kinds of clouds.

The book is written on the basis of practical experience of awareness (knowledge coming as a sense in the body) and continues the works of Carlos Castaneda.

Freedom lies not in the opportunity of choice

but in the opportunity to refuse anything

and not affected go further.

Carlos Castaneda is one of the most mysterious and the influence writers in the history of mankind. He claimed that during field research in anthropology in the United States met an indian named don Juan, who was a mage (shaman). According to Carlos, don Juan opened and showed him an energy description of the Universe that in the depth and scale affects any imagination. Subsequently, Castaneda explained this system in 10 of his books which became international bestsellers and are reissued every year in many countries. The book “West winds of infinity. An addition to the rule of the Nagual of Carlos Castaneda” is written on the basis of practical experience of the author and is a continuation of the works of Carlos Castaneda in the part of the rule of the Nagual. The first four chapters contain summarizing the energy description of the Universe (based on “The Fire from Within” and “The Active Side of Infinity” by Carlos Castaneda) and additions of the author. Other chapters contain new material. In the application there is the rule of the Nagual (from “Eagle`s Gift” and “Second Ring of the Power” by Carlos Castaneda).

All the italicized words in the book related with phenomena of the second attention, that cannot be comprehended by the mind and cannot be accurately described by language, but can be experienced on personal experience in the form of feelings and sensations. These phenomena exist on an energetic level and have a fundamental impact on our lives. If same words are not in italics, then it should be understood in their ordinary meaning. When getting acquainted with the book for the first time, it is very important to read it quickly without thinking, long breaks and paying attention to the italicized words, caught only the basic essence of the content.

The winds of infinity related to the phenomena of the second attention, therefore does not make sense to evaluate the description of the winds or the book as a whole from the point of view of logic and mind. Moreover, people in life which the mind dominates under the body, most likely, to reject all that is written here. This is because the mind has the desire to reign supreme over our lives and suppresses the will of the body, as well as anything that can weaken its position even with the help of tools that it usually uses, that is language. Internal dialogue, which constantly takes place within our mind in the form of a constant presence of thoughts, images, discussion and evaluation of what is happening around, forms and constantly supports within us the personal I. It has an obsessive nature and is not controlled by us, we can`t stop it at any time and on any time. At the same time, there is another, true I within us, which is connected with the body, feelings, intuition and dreams. Its center is in the energy body (second attention, double, dreaming body) of a person, but we lose connection with it in childhood, when the internal dialogue takes control under our consciousness. An inner obsessive voice drowns out the voice of our true I, sows doubts, meaningless worries and fears, contradictions and sadness inside us and does not allow us to unlock the potential of energy possibilities. People can`t really change something in their lives, because they believe everything that the mind says, and go on about all their desires and unwillingness, without seeking to objectively look beyond their “I do not want” and “I do not need it”.

The site of the book is www.abstraktnoe.ru. There are videos and photos that were spontaneously made at different winds with watching the Power. They have footmark of the Power and can help to determine self direction.

To the perception of the seer the physical body of man appears in the form of a luminous energy sphere, and the Universe – in the form of a cluster of countless luminous energy threads (emanations) that have self-awareness. Vision is the direct perception of energy as it flows in the Universe. In the process of vision, a person perceives the surrounding with all his being and learns the inner essence of phenomena and things. Knowledge that comes in vision should be considered as energy fact, it hasn’t link with the activities of the mind.

Seers accumulated energy knowledge thousands of years and lived mainly in the territory of modern Mexico and neighboring countries. Their history is connected with the history of Indian tribes. The main discoveries were made by them for several millennia BC. The seers were extremely pragmatic and mostly interested only in knowledge that could be confirmed energetically and used for practical purposes. However, their excessive use of the acquired knowledge to achieve selfish goals led to the decline of their culture and traditions and ended with their almost complete extermination by the Spaniards during the colonization of North and Central America in the 16th century. However, some of them survived, and in order to preserve the traditions and continue their development, they were forced to review the basics of their system of knowledge of the energy structure of the Universe and soberly set new priorities.

One of the major discoveries are made by the ancient seers was the discovery of a vibrating force supporting our energy spheres as a whole. This adhesive force they named the intent (spirit, abstract, Power). Seers also found that the Power permeates all things and is responsible for the formation of all bodies and all phenomena occurring in the Universe. The spirit has own will, incomprehensible to humans, and is a force hidden managing our lives. It does this by imperceptibly changing our perception (shifting the assemblage point), manifesting at the physical level through certain people and creating certain circumstances on our way. People are connected to this force through will. Will is a tentacle-like branch on the energy sphere, located relative to the physical body in the abdomen. An arbitrary shift of the assemblage point becomes possible for a warrior with the mastering of the will. The concrete application of the will is the intent. Since the mastering of the will the warrior becomes a mage. If a mage learns to see and chooses knowledge as the main task to achieve the goal of absolute freedom, then he can be called a man of knowledge.

From my practical experience, I was convinced that the presence of the Power on the physical level can be taken literally. On the physical level, the Power is perceived as a soft swaying plaque that appears on the objects of the surrounding world (the object seems to be inflated, filled, it seems more, its boundaries can tremble, blur, bend), as the mystery, attraction, unusual brightness of colors, clarity of details, which acquires a separate perceived object, sound or the whole perceived picture, as a revival of an inanimate object, for example, it may seem that the car “looks”. The easiest way to catch the Power is at night in the gusts of wind, weaving into the crowns of trees or waving blankets, scraps of fabric, matter, around light sources, in cars, windows, covered objects. The Power is also present in everything unusual that unobtrusively catches attention (touches, i.e. stands out, clearly enhances in the field of your attention). The Power always unobtrusively draws attention, simultaneously enticing and frightening in its uncer-tainty. To capture its presence may everyone calmed down in the depth of self and tearing off a piece of attention from the internal dialogue with transferring it to the contemplation of the around. Focusing on the Power in itself calms internal dialogue and pacifies.