The Cavaliers of Virginia. Volume 2 of 2 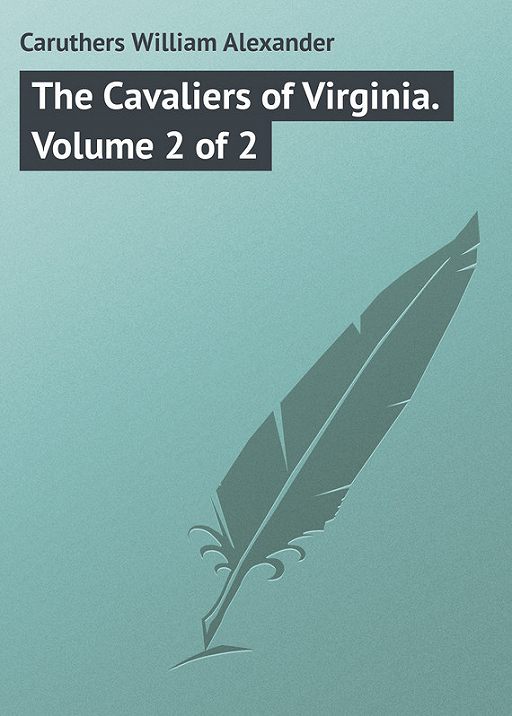 Caruthers William Alexander
The Cavaliers of Virginia, vol. 2 of 2 / or, The Recluse of Jamestown; An historical romance of the Old Dominion

The lightning streamed athwart the heavens in quick and vivid flashes. One peal of thunder after another echoed from cliff to cliff, while a driving storm of rain, wind and hail, made the face of nature black and dismal. There was something frightfully congenial in this uproar of the contending elements with the storm raging in Bacon's heart, as he rushed from the scene of the catastrophe we have just witnessed. The darkness which succeeded the lurid and sulphureous flashes was not more complete and unfathomable than the black despair of his own soul. These vivid contrasts of light and gloom were the only stimulants of which he was susceptible, and they were welcomed as the light of his path! By their guidance he wildly rushed to his stable, saddled, led forth, and mounted his noble charger, his own head still uncovered. For once the gallant animal felt himself uncontrolled master of his movements, fleet as the wind his nimble heels measured the narrow limits of the island. A sudden glare of intense light served for an instant to reveal both to horse and rider that they stood upon the brink of the river, and a single indication of the rider's will was followed by a plunge into the troubled waves. Nobly and majestically he rose and sank with the swelling surges. His master sat erect in the saddle and felt his benumbed faculties revived, as he communed with the storm. The raging elements appeared to sympathize with the tumult of his own bosom. He laughed in horrid unison with the gambols of the lightning, and yelled with savage delight as the muttering thunder rolled over his head.

There is a sublime stimulus in despair. Bacon felt its power; he was conscious that one of the first laws of our organization, (self-preservation,) was suddenly dead within him.

The ballast of the frail vessel was thrown overboard, and the sails were spread to the gathering storm with reckless desperation. Compass and rudder were alike abandoned and despised – they were for the use of those who had hopes and fears. For himself he spread his sails and steered his course with the very spirit of the storm itself. Nature in her wildest moods has no terrors for those who have nothing to lose or win; no terrors for them who laugh and play with the very elements of her destruction; they are wildly, madly independent. It is the sublimity of the maniac! Nevertheless there is a fascination in his reckless steps as he threads the narrow and fearful windings of the precipice, or carelessly buffets the waves of the raging waters. There are other sensations of a high and lofty character in this disjointed state of the faculties. The very ease and rapidity with which ordinary dangers are surmounted, serves to keep up the delusion, and were it not for the irresponsible condition of the mind, there would doubtless be impiety in its developments. Such were Bacon's sensations as he wildly stemmed the torrent. He imagined that he was absolved from the ordinary responsibilities and hazards of humanity! and to his excited fancy, it seemed as though petty fears and grovelling cautions were all that lay between humanity and the superior creations of the universe! that power also came with this absolution from the hopes, fears and penalties of man's low estate. In imagination "he rode upon the storm and managed the whirlwind." The monsters of the deep were his playmates, the ill-omened birds of the night his fellows. The wolves howled in dreadful concord with the morbid efforts of his preternaturally distorted faculties, as the noble and panting animal first struck the shore with his forefeet.

Emerging from the water, he stroked down the dripping mane with a wild and melancholy affection. The very consciousness of such a feeling yet remaining in his soul, which he dared indulge, produced for the moment a dangerous and kindred train of emotions. These as before led him upon forbidden ground, and again the wild tumult of his soul revived. Striking his heels into the animal's flanks, and bending upon his neck, he urged him over the ground at a pace in unison with the impetuosity of his own feelings.

The fire and gravel flew from his heels, as he bounded through the trackless forests of the unsubdued wilderness. The frightened birds of night, and beasts of prey, started in affright, wild at the appearance upon the scene of one darker and wilder than themselves. The very reptiles of the earth shrunk to their hiding places, as the wild horseman and his steed invaded their prescriptive dominions.

Mrs. Fairfax and her daughter, according to the commands of Sir William Berkley, were conveyed to his mansion. To them all places were now alike. The mother after a long and death-like trance, revived to a breathing and physical existence; but her mind was overrun with horrors. Reason was dethroned, and her lips gave utterance to the wildest fantasies. Events with which, and persons with whom, none of those about her were conversant, were alluded to in all the incoherency and unbridled impetuosity of the maniac. The depletion and anodynes of the physician were administered in vain. The ravages upon the seat of nervous power had rendered the ordinary remedies to the more distant chords of communication utterly powerless. From a mild, bland, feeble and sickly state of melancholy, she was suddenly transformed into a frenzied lunatic. Her muscular power seemed to have received multiplied accessions of strength. Yet there was "a method in her madness" – the same names and scenes frequently recurred in her raving paroxysms. That of Charles was reiterated through the wild intonations of delusion; sometimes madly and revengefully, but more frequently in sorrow.

There was occasionally a moving and touching pathos in these latter demonstrations – tearless it is true, but thrilling and electrifying in the subdued whisper in which they were sometimes uttered. A flood of pent up emotions was poured forth with a thrilling eloquence which had their origin in the foundations of the soul. Scenes of days long past, were revived with a graphic and affecting power, which imagination cannot give if their mysterious source and receptacle be not previously and abundantly stored with the richest treasures of the female heart and mind.

Because the by-standers do not happen to be in possession of all the previous history of the sufferer, so as to put together these melancholy and broken relics, they are generally supposed to be the creations of a distempered fancy.

So it was with Mrs. Fairfax; her detached reminiscences fell upon the dull and uninstructed ears of her attendants as the wildest hallucinations of the brain, yet there was more connexion in these flights than they imagined. They supposed that she thought herself conversing in her most subdued and touching moments with young Dudley, merely because his name was frequently pronounced, and that he happened to be present at the disastrous ceremony, which resulted so dreadfully to all parties.

Among all these, Virginia's was the hardest lot – so delicately and exquisitely organized, so gentle – so susceptible – so full of enthusiasm – so rich in innocence and hope, and all so suddenly prostrated. Bacon was nerved with the wild yet exalted heroism of manhood in despair. Her mother was wrapt in a blessed oblivion of the present, but she was sensitively and exquisitely alive to the past, present and future. One fainting paroxysm succeeded to another in frightful rapidity, for hours after she was removed to her uncle's house.

The painful intervals were filled up with a concentration of wretched reflections, which none but a finely organized and cultivated female mind could conceive or endure. No proper conception of these can be conveyed in language, unless the reader will suffer his imagination to grasp her whole condition at once. – Beginning at the first inception of the unsuspected passion for the noble youth who is the hero of our tale – in her earliest infancy; and afterwards following her as it matured and strengthened by the reflections of riper years. – Every faculty, both perceptive and intellectual, had combined to impress his image in the most indelible colours upon her heart. He had himself ripened these very faculties into maturity by the most assiduous culture, and won her esteem by the most touching, delicate, and respectful attentions.

All these things in detail were painfully revolved in her mind. Every landscape, every book, every subject, reminded her most forcibly of him whom it was now criminal to think of. Hers was the sorrow that no sympathy could soften, no friendship alleviate. The sight of her intimate and confidential friend drove her mad, for her presence instantly revived the horrid recollections of the chapel. Long after the clouds had cleared away, the thunder still roared in her ears. The sudden slamming of a door sounded to her nervous irritability, like the report of a cannon. Her own shadow conjured up horrible images. The most violent and the most acute paroxysms of the human organization, however, have a tendency to wear themselves out, when left uninterruptedly to their own action. Such was necessarily, in some measure, the case with Virginia; her mother's more alarming condition calling so much more loudly for attention, and Wyanokee having fled, and Harriet's presence proving so evidently hurtful, she was consequently left with a single sable domestic. Essentially she was in profound solitude; and after the first paroxysms which we have described, her mind naturally and irresistibly fell into a train of retrospective thought. Startling and horrifying they certainly were at first, but still the mind clung to them. Many of the circumstances of the late disastrous meeting were to her as yet unexplained. To these she clung as to the last remnants of hope; they were the straws at which she grasped with the desperation of the drowning wretch. She had at first received her mother's tacit acknowledgment of the mysterious stranger's statement, or rather the effect produced by that statement as irresistible confirmation of its truth. But now she doubted the propriety of her hasty conviction. She marvelled at the effect produced upon her mother – yet there were other means of accounting for it. Would she not have exhibited a like sensibility, had a like statement been made, however false, under such circumstances? – did she not deny it, positively deny it at the moment? Such was the train of reasoning by which her mind began to reassure itself; and it must be recollected that she had never heard more of her mother's history, than that she was a childless widow when her father married her. Sufficient was left however of first impressions to render her situation one of intense suffering and suspense. She dared not ask for Bacon, yet a restless and gnawing anxiety possessed her, to know whether he acknowledged the truth of the dreadful tale without a murmur, and without investigation. But her physical organization could not keep pace with the ever elastic mind; her gentle frame gave sensible evidence that the late violent shocks had made sad inroads upon her system. One chill was succeeded by another, until they were in their turn followed by a burning fever. In this condition she fell again into the hands of the physician, and all mental distress was soon lost in the paramount demands of the suffering body.

The Cavaliers of Virginia. Volume 2 of 2