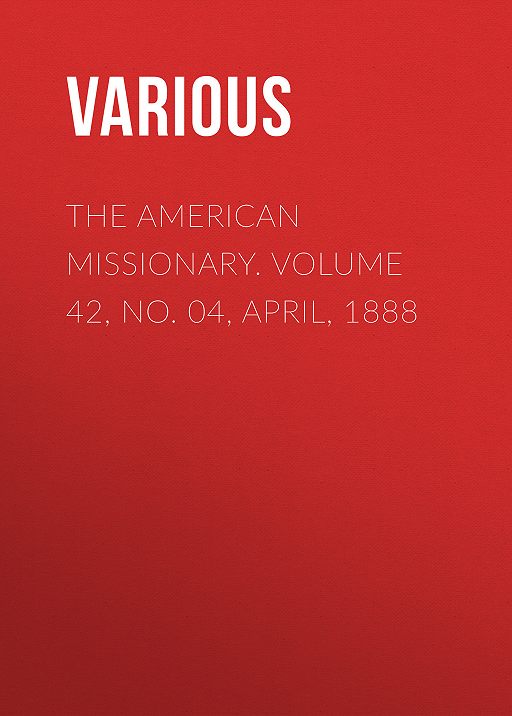 Relating to the work of the Association may be addressed to the Corresponding Secretaries; letters for "THE AMERICAN MISSIONARY," to the Editor, at the New York Office.

In drafts, checks, registered letters, or post office orders, may be sent to H.W. Hubbard, Treasurer, 56 Reade Street, New York, or, when more convenient, to either of the Branch Offices, 21 Congregational House, Boston, Mass., or 151 Washington Street, Chicago, Ill. A payment of thirty dollars at one time constitutes a Life Member.

FORM OF A BEQUEST

"I bequeath to my executor (or executors) the sum of – dollars, in trust, to pay the same in – days after my decease to the person who, when the same is payable, shall act as Treasurer of the 'American Missionary Association,' of New York City, to be applied, under the direction of the Executive Committee of the Association, to its charitable uses and purposes." The Will should be attested by three witnesses.

We acknowledge with gratitude to God and to his people the fact that our receipts during the month of February are such as greatly to encourage us.

We are cheered, not only by the benevolences which are reporting themselves from the churches, but also by the kind words of sympathy and helpfulness which show us anew that this great and exigent work upon us was never nearer than now to the hearts of our pastors and churches.

We may add that the month just past and those immediately before us are those upon which we must largely depend for our fiscal year. We are coming to the summer season, when contributions are less likely to be taken. We trust that those who believe that God has called the American Missionary Association to this immense work in the name of Christ, will not cease to pray that the hearts of men may be moved to heed the appeals of those who, through us, ask for the very bread of life, and who will not have it unless we carry it to them.

We are now compelled to deny more appeals for help which ought to be heard than we are granting. Several schools which were begun by private enterprise with good intent, are now asking us to take them from their hands upon our own, where they can be perpetuated and saved. We would like to save these schools to the needy people whose hope is in them, and to protect the churches from indiscriminate appeals for works which they have not authorized, and which we could do with greater economy and better care; but for this we need a generous increase of gifts. Our faith was in Him who said, "Knock, and it shall be opened unto you," and the doors were opened. God withdrew the bolts of hindrance and said, "Beloved, I have set before you an open door." Our faith is in Him who also said "Ask, and ye shall receive."

A friend has just sent us eighteen subscriptions to the American Missionary. This might be repeated easily by a thousand friends. There is scarcely a self-sustaining church in the United States where it could not be done by one who would try to do it as an act of missionary love. Some who read this, perhaps, will try and will succeed.

The name of Rev. Frank Cross, who was appointed to the charge of the Rosebud Indian Mission, was by mistake not printed in the roll of workers. He is there, however, and his work has gone on bravely and hopefully.

We wish that the extent, and necessity, and hopefulness of our mountain work, were more fully understood by our readers. Now is our opportunity and the accepted time to answer the most urgent appeals from this neglected region in the heart of our country. Our Congregational churches are just what are needed to uplift these people. One of our earnest missionaries writes us:—

"The A.M.A. has done a work here to be profoundly grateful for as a beginning, but thus far it is only playing around the edge of its mountain work. This mountain region is of great extent. Sober calculation from facts already gleaned, makes a thousand Congregational churches in these mountains the possibility of the future, if only the strategic points can now be occupied. One church and one school to a county, should be our immediate aim; then we can throw upon these the work of developing native teachers and preachers for the rest. There are forty counties waiting for us, and all our mountain work so far is in three or four. I see this place where I am, changing like magic under the influence of school and church, but the necessity for our going forward oppresses me. I am ready for any additional labor, and will carry any burden my strength will permit, if only the American Missionary Association will take for its motto, 'One church and one school in every mountain county, as fast as they can be established.' I feel, when I see the need, as if I could plead the money right out of the most self-indulgent members of our favored churches at home. It would not be expensive as compared with other missionary work. Cannot some way be devised for making a large advance on the present movement?"

Those who thought to cripple Atlanta University because it could not yield its principles for the sake of a State appropriation of $8,000 made a mistake. They have helped that which they meant to hinder. The university will get the money. Joseph's brethren took counsel together and said, "We will see what will become of his dream," and they thought they had a sure thing when they put him in a pit, but they discovered some years after that this was but a way-station on the direct road to the Viceroyship of Egypt, and they saw what became of his dream.

When Napoleon the First wished to hinder the Huguenot Church, he gave it a small stipend in order to retain hold of it. He appropriated just enough to keep it a cripple. When the State of Georgia thought the education of the Negro was becoming too marked, it reversed the policy of the far-seeing Bonaparte and took its hands off. We have never thought that Napoleon was a truly good man, but we do believe that he had a larger idea of the philosophy of control than the author of the Glenn Bill. If the State had held on, it might have hindered, but it has lost its hold.

Would it not sound well to the American people to have it said that in the United States of America, in the year 1888, our missionaries were imprisoned for reading the Bible to a heathen tribe of Indians who lived remote from civilization, the crime of it being that it was read in the only language which they could understand?

Yet "the orders are," writes a missionary, "that we shall hold only two services on a Sunday and two during the week, and that we shall cease to read the Bible in the Indian homes." This is the Government authority of the great and free United States, but is there any authority greater than God?

In an eloquent address at the Old South Church in Boston, on Sunday, March 4th, George W. Cable accentuated in strong words the work in which we are engaged. "Here is the mightiest, the widest, the most fruitful, the most abundant, the most prolific, missionary field that was ever opened to any Christian people."

We quote from his address:

The benevolence of Northern men and women, yea, and even of Northern children, helped to establish in the South these missionary colleges, these educational missions, wherein not the black man alone, not the black woman alone, but every one who was qualified with orderly behavior and a rational intellect might come, and get, not only an education, but a Christian education, and not only a Christian education, but a Christian American education. These institutions, standing out in the darkness when nothing else stood by them, when the land was racked and torn and bled afresh under the agonies of reconstruction, these institutions began and carried on the blessed work of raising up leaders, intellectual leaders, among the black people, for the guidance and stimulation of the colored race toward the aspirations of American citizenship and Christian intelligence.

These institutions, these missionary colleges in the South, have carried the torch of liberty, these have upheld it, these have taught American citizenship, these have given to the Southern States 16,000 colored teachers, when nobody else would teach the poor black boy—nay, or the poor white boy either. Seven millions of people concerned in the matter, and the National Bureau of Public Education reporting year after year that the reason why there are 600,000 colored