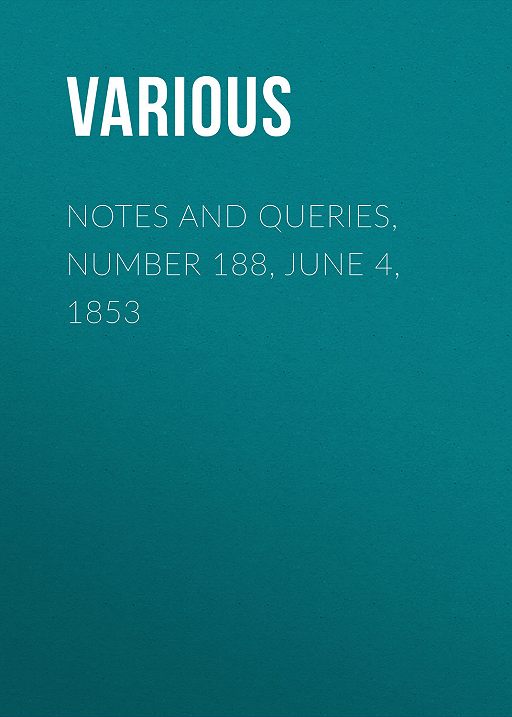 CORRECTIONS ADOPTED BY POPE FROM THE DUNCES

In Pope's "Letter to the Honourable James Craggs," dated June 15, 1711, after making some observations on Dennis's remarks on the Essay on Criticism, he says—

"Yet, to give this man his due, he has objected to one or two lines with reason; and I will alter them in case of another edition: I will make my enemy do me a kindness where he meant an injury, and so serve instead of a friend."

An interesting paper might be drawn up from the instances, for they are rather numerous, in which Pope followed out this very sensible rule. I do not remember seeing the following one noted. One of the heroes of the Dunciad, Thomas Cooke, the translator of Hesiod, was the editor of a periodical published in monthly numbers, in 8vo., of which nine only appeared, under the title of The Comedian, or Philosophical Inquirer, the first number being for April, and the last for December, 1732. It contains some curious matter, and amongst other papers is, in No. 2., "A Letter in Prose to Mr. Alexander Pope, occasioned by his Epistle in Verse to the Earl of Burlington." It is very abusive, and was most probably written either by Cooke or Theobald. After quoting the following lines as they then stood:


"He buys for Topham drawings and designs,
For Fountain statues, and for Curio coins,
Rare monkish manuscripts for Hearne alone,
And books for Mead, and rarities for Sloane,"

the letter-writer thus unceremoniously addresses himself to the author:

"Rarities! how could'st thou be so silly as not to be particular in the rarities of Sloane, as in those of the other five persons? What knowledge, what meaning is conveyed in the word rarities? Are not some drawings, some statues, some coins, all monkish manuscripts, and some books, rarities? Could'st thou not find a trisyllable to express some parts of nature for a collection of which that learned and worthy physician is eminent? Fy, fy! correct and write—


'Rare monkish manuscripts for Hearne alone,
And books for Mead, and butterflies for Sloane.'

"Sir Hans Sloane is known to have the finest collection of butterflies in England, and perhaps in the world; and if rare monkish manuscripts are for Hearne only, how can rarities be for Sloane, unless thou specifyest what sort of rarities? O thou numskull!"—No. 2., pp. 15—16.

The correction was evidently an improvement, and therefore Pope wisely accepted the benefit, and was the channel through which it was conveyed; and the passage accordingly now stands as altered by the letter-writer.

Dare, to lurk, or cause to lurk; used both transitively and intransitively. Apparently the root of dark and dearn.


"Here, quod he, it ought ynough suffice,
Five houres for to slepe upon a night:
But it were for an olde appalled wight,
As ben thise wedded men, that lie and dare,
As in a fourme sitteth a wery hare."

Tyrwhitt's utterly unwarranted adoption of Speght's interpretation is "Dare, v. Sax. to stare." The reader should always be cautious how he takes upon trust a glossarist's sly fetch to win a cheap repute for learning, and over-ride inquiry by the mysterious letters Sax. or Ang.-Sax. tacked on to his exposition of an obscure word. There is no such Saxon vocable as dare, to stare. Again, what more frequent blunder than to confound a secondary and derivative sense of a word with its radical and primary—indeed, sometimes to allow the former to usurp the precedence, and at length altogether oust the latter: hence it comes to pass, that we find dare is one while said to imply peeping and prying, another while trembling or crouching; moods and actions merely consequent or attendant upon the elementary signification of the word:


"I haue an hoby can make larkys to dare."

on which line that able, but therein mistaken editor's note is, "to dare, i. e. to be terrified, to tremble" (he however also adds, it means to lurk, to lie hid, and remits his reader to a note at p. 379., where some most pertinent examples of its true and only sense are given), to which add these next:


"She sprinkled vs with bitter juice of vncouth herbs, and strake
The awke end of hir charmed rod vpon our heades, and spake
Words to the former contrarie. The more she charm'd, the more
Arose we vpward from the ground on which we darde before."

And again, a little further on:

in the Latin Vulgate, latet and lateat respectively; in the original, λανθάνει and λανθανέτω. Now the book is before me, I beg to furnish Mr. Collier with the references to his usage of terre, mentioned in Todd's Dictionary, but not given (Collier's Shakspeare, vol. iv. p. 65., note), namely, 6th cap. of Epistle to Ephesians, prop. init.; and 3rd of that to Colossians, prop. fin.

Die and live.—This hysteron proteron is by no means uncommon: its meaning is, of course, the same as live and die, i. e. subsist from the cradle to the grave:

All manner of whimsical and farfetched constructions have been put by the commentators upon this very homely sentence. As long as the question was, whether their wits should have licence to go a-woolgathering or no, one could feel no great concern to interfere: but it appears high time to come to Shakspeare's rescue, when Mr. Collier's "clever" old commentator, with some little variation in the letters, and not much less in the sense, reads "kills" for dies; but then, in the Merry Wives of Windsor, Act II. Sc. 3., the same "clever" authority changes "cride-game (cride I ame), said I well?" into "curds and cream, said I well?"—an alteration certainly not at odds with the host's ensuing question, "said I well?" saving that that, to liquorish palate, might seem a rather superfluous inquiry.


"With sorrow they both die and live
That unto richesse her hertes yeve."


"He is a foole, and so shall he dye and liue,
That thinketh him wise, and yet can he nothing."

"Behold how ready we are, how willingly the women of Sparta will die and live with their husbands."—The Pilgrimage of Kings and Princes, p. 29.

Except in Shakspeare's behalf, it would not have been worth while to exemplify so unambiguous a phrase. The like remark may also be extended to the next word that falls under consideration.

Kindly, in accordance with kind, viz. nature. Thus, the love of a parent for a child, or the converse, is kindly: one without natural affection (ἄστοργος) is unkind, kindless, as in—

Thence kindly expanded into its wider meaning of general benevolence. So under another phase of its primary sense we find the epithet used to express the excellence and characteristic qualities proper to the idea or standard of its subject, to wit, genuine, thrifty, well-liking, appropriate, not abortive, monstrous, prodigious, discordant. In the Litany, "the kindly fruits of the earth" is, in the Latin versions "genuinus," and by Mr. Boyer rightly translated "les fruits de la terre chaqu'un selon son espèce;" for which Pegge takes him to task, and interprets kindly "fair and good," through mistake or preference adopting the acquired and popular, in lieu of the radical and elementary meaning of the word. (Anonymiana, pp. 380—1. Century viii. No. lxxxi.) The conjunction of this adjective with gird in a passage of King Henry VI. has sorely gravelled Mr. Collier: twice over he essays, with equal success, to expound its purport. First, loc. cit., he finds fault with gird as being employed in rather an unusual manner; or, if taken in its common meaning of taunt or reproof, then that kindly is said ironically; because there seems to be a contradiction in terms. (Monck Mason's rank distortion of the words, there cited, I will not pain the reader's sight with.) Mr. Collier's note concludes with a supposition that gird may possibly be a misprint. This is the misery! Men will sooner suspect the text than their own understanding or researches. In Act I. Sc. 1. of Coriolanus, dissatisfied with his previous note, Mr. Collier tries again, and thinks a kindly gird may mean a gentle reproof. That the reader may be able to judge what it does mean, it will be necessary to quote the king's gird, who thus administers a kindly rebuke to the malicious preacher against the sin of malice, i.e. chastens him with his own rod:


"King. Fie, uncle Beauford, I have heard you preach,
That mallice was a great and grievous sinne:
And will not you maintaine the thing you teache,
But prove a chief offender in the same?

A gird, akin to, in keeping with, fitting, proper to the cardinal's calling; an evangelical gird for an evangelical man: what more kindly? Kindly, connatural, homogeneous. But now for a bushel of examples, some of which will surely avail to insense the reader in the purport of this epithet, if my explanation does not:

"And that (pride) seems somewhat kindly too, and to agree with this disease (the plague). That pride which swells itself should end in a tumour or swelling, as, for the most part, this disease doth."—Id., p. 228.

"And so, you are found; and they, as the children of perdition should be, are lost. Here are you: and where are they? Gone to their own place, to Judas their brother. And, as is most kindly, the sons to the father of wickedness; there to be plagued with him for ever."—Id., vol. iv. p. 98.

"There cannot be a more kindly consequence than this, our not failing from their not failing: we do not, because they do not."—Id., p. 273.

"And having then made them, it is kindly that viscera misericordiæ should be over those opera that came de visceribus."—Id., p. 327.

"The children came to the birth, and the right and kindly copulative were; to the birth they came, and born they were: in a kind consequence who would look for other?"—Id., p. 348.

"For usque adeo proprium est operari Spiritui, ut nisi operetur, nec sit. So kindly (proprium) it is for the spirit to be working as if It work not, It is not."—Id., vol. iii. p. 194.

"And when he had overtaken, for those two are but presupposed, the more kindly to bring in επελάβετο, when, I say, He had overtaken them, cometh in fitly and properly επιλαμβάνεται."—Id., vol. i. p. 7.

"Respice et plange: first, 'Look and lament' or mourn; which is indeed the most kindly and natural effect of such a spectacle."—Id., vol. ii. p. 130.

Perhaps the following will be thought so apposite, that I may be spared the labour, and the reader the tedium of perusing a thousand other examples that might be cited:

And there is nothing more kindly than for them that will be touching, to be touched themselves, and to be touched home, in the same kind themselves thought to have touched others."—Id., vol. iv. p. 71.1