A Grammar of the English Tongue 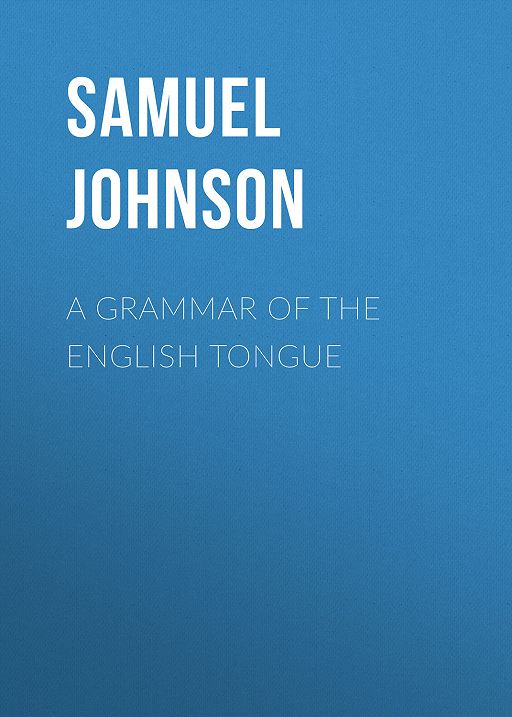 Samuel Johnson
A Grammar of the English Tongue

A GRAMMAR OF THE ENGLISH TONGUE

In this division and order of the parts of grammar I follow the common grammarians, without inquiring whether a fitter distribution might not be found. Experience has long shown this method to be so distinct as to obviate confusion, and so comprehensive as to prevent any inconvenient omissions. I likewise use the terms already received, and already understood, though perhaps others more proper might sometimes be invented. Sylburgius, and other innovators, whose new terms have sunk their learning into neglect, have left sufficient warning against the trifling ambition of teaching arts in a new language.

Orthography is the art of combining letters into syllables, and syllables into words. It therefore teaches previously the form and sound of letters.

The letters of the English language are,

To these may be added certain combinations of letters universally used in printing; as, fl, ff, fi, ffi, ffl, and &, or and per se, and.

Our letters are commonly reckoned twenty-four, because anciently i and j as well as u and v were expressed by the same character; but as those letters, which had always different powers, have now different forms, our alphabet may be properly said to consist of twenty-six letters

Such is the number generally received; but for i it is the practice to write y in the end of words, as thy, holy; before i, as from die, dying; from beautify, beautifying; in the words says, days, eyes; and in words derived from the Greek, and written originally with υ, as sympathy, συμπαθεια, system, συστημα.

For u we often write w after a vowel, to make a diphthong; as, raw, grew, view, vow, flowing; lowness.

The sounds of all the letters are various.

In treating on the letters, I shall not, like some other grammarians, inquire into the original of their form, as an antiquarian; nor into their formation and prolation by the organs of speech, as a mechanick, anatomist, or physiologist; nor into the properties and gradation of sounds, or the elegance or harshness of particular combinations, as a writer of universal and transcendental grammar. I consider the English alphabet only as it is English; and even in this narrow disquisition I follow the example of former grammarians, perhaps with more reverence than judgment, because by writing in English I suppose my reader already acquainted with the English language, and consequently able to pronounce the letters of which I teach the pronunciation; and because of sounds in general it may be observed, that words are unable to describe them. An account, therefore, of the primitive and simple letters, is useless, almost alike to those who know their sound, and those who know it not.

A has three sounds, the slender, open, and broad.

A slender is found in most words, as face, mane, and in words ending in ation, as creation, salvation, generation.

A open is the a of the Italian, or nearly resembles it; as father, rather, congratulate, fancy, glass.

A broad resembles the a of the German; as all, wall, call.

Many words pronounced with a broad were anciently written with au; as sault, mault; and we still say, fault, vault. This was probably the Saxon sound, for it is yet retained in the northern dialects, and in the rustick pronunciation; as maun for man, haund for hand.

The short a approaches to the a open, as grass.

The long a, if prolonged by e at the end of the word, is always slender, as graze, fame.

A forms a diphthong only with i or y, and u or w. Ai or ay, as in plain, wain, gay, clay, has only the sound of the long and slender a, and differs not in the pronunciation from plane, wane.

Au or aw has the sound of the German a, as raw, naughty.

Ae is sometimes found in Latin words not completely naturalized or assimilated, but is no English diphthong; and is more properly expressed by single e, as Cesar, Eneas.

E is the letter which occurs most frequently in the English language.

Almost all words which now terminate in consonants ended anciently in e, as year, yeare; wildness, wildnesse; which e probably had the force of the French e feminine, and constituted a syllable with its associate consonant; for in old editions words are sometimes divided thus, clea-re, fel-le, knowled-ge. This e was perhaps for a time vocal or silent in poetry as convenience required; but it has been long wholly mute. Camden in his Remains calls it the silent e.

It has sometimes in the end of words a sound obscure, and scarcely perceptible, as open, shapen, shotten, thistle, participle, metre, lucre.

This faintness of sound is found when e separates a mute from a liquid, as in rotten, or follows a mute and liquid, as in cattle.

E forms a diphthong with a, as near; with i, as deign, receive; and with u or w, as new, stew.

Ei is sounded like e long, as seize, perceiving.

Eu sounds as u long and soft.

E, a, u, are combined in beauty and its derivatives, but have only the sound of u.

E may be said to form a diphthong by reduplication, as agree, sleeping.

I has a sound long, as fīne; and short as fĭn.

That is eminently observable in i, which may be likewise remarkable in other letters, that the short sound is not the long sound contracted, but a sound wholly different.

The long sound in monosyllables is always marked by the e final, as thĭn, thīne.

I is often sounded before r, as a short u; as flirt, first, shirt.

I is joined with eu in lieu, and ew in view; which triphthongs are sounded as the open u.

The short o has sometimes the sound of close u, as son, come.

O coalesces into a diphthong with a, as moan, groan, approach: oa has the sound of o long.

O is united to e in some words derived from Greek, as œconomy; but as being not an English diphthong, they are better written as they are sounded, with only e, economy.

This coalition of letters seems to unite the sounds of the two letters, as far as two sounds can be united without being destroyed, and therefore approaches more nearly than any combination in our tongue to the notion of a diphthong.

With o, as boot, hoot, cooler; oo has the sound of the Italian u.

With u or w, as our, power, flower; but in some words has only the sound of o long, as in soul, bowl, sow, grow. These different sounds are used to distinguish different significations: as bow an instrument for shooting; bow, a depression of the head; sow, the she of a boar; sow, to scatter seed; bowl, an orbicular body; bowl, a wooden vessel.

Ou is frequently used in the last syllable of words which in Latin end in or and are made English, as honour, labour, favour, from honor, labor, favor.

Some late innovators have ejected the u, without considering that the last syllable gives the sound neither of or nor ur, but a sound between them, if not compounded of both; besides that they are probably derived to us from the French nouns in eur, as honeur, faveur.

It coalesces with a, e, i, o; but has rather in these combinations the force of the w consonant, as quaff, quest, quit, quite, languish; sometimes in ui the i loses its sound, as in juice. It is sometimes mute before a, e, i, y, as guard, guest, guise, buy.

U is followed by e in virtue, but the e has no sound.

Ue is sometimes mute at the end of a word, in imitation of the French, as prorogue, synagogue, plague, vague, harangue.

Y is a vowel, which, as Quintilian observes of one of the Roman letters, we might want without inconvenience, but that we have it. It supplies the place of i at the end of words, as thy, before an i, as dying; and is commonly retained in derivative words where it was part of a diphthong, in the primitive; as, destroy, destroyer; betray, betrayed, betrayer; pray, prayer; say, sayer; day, days.

Y being the Saxon vowel y, which was commonly used where i is now put, occurs very frequently in all old books.

A vowel in the beginning or middle syllable, before two consonants, is commonly short, as ŏppŏrtunity.

In monosyllables a single vowel before a single consonant is short; as stag, frog.

Many is pronounced as if it were written manny.