The Young Trailers: A Story of Early Kentucky 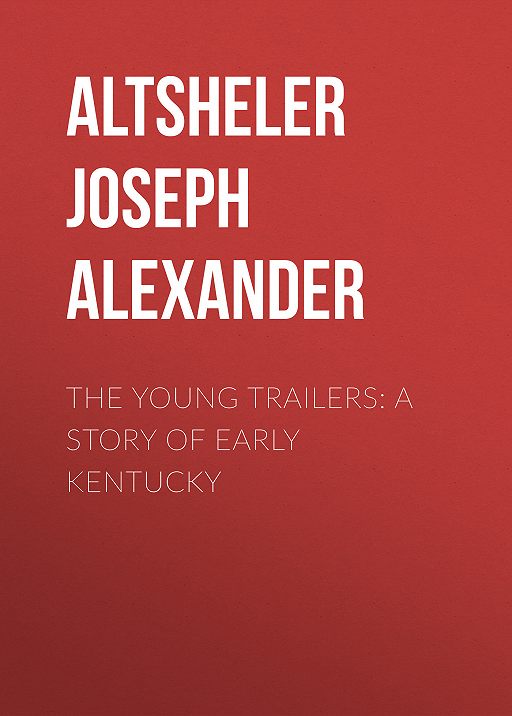 Joseph A. Altsheler
The Young Trailers: A Story of Early Kentucky

CHAPTER I
INTO THE UNKNOWN

It was a white caravan that looked down from the crest of the mountains upon the green wilderness, called by the Indians, Kain-tuck-ee. The wagons, a score or so in number, were covered with arched canvas, bleached by the rains, and, as they stood there, side by side, they looked like a snowdrift against the emerald expanse of forest and foliage.

The travelers saw the land of hope, outspread before them, a wide sweep of rolling country, covered with trees and canebrake, cut by streams of clear water, flowing here and there, and shining in the distance, amid the green, like threads of silver wire. All gazed, keen with interest and curiosity, because this unknown land was to be their home, but none was more eager than Henry Ware, a strong boy of fifteen who stood in front of the wagons beside the guide, Tom Ross, a tall, lean man the color of well-tanned leather, who would never let his rifle go out of his hand, and who had Henry's heartfelt admiration, because he knew so much about the woods and wild animals, and told such strange and absorbing tales of the great wilderness that now lay before them.

But any close observer who noted Henry Ware would always have looked at him a second time. He was tall and muscled beyond his years, and when he walked his figure showed a certain litheness and power like that of the forest bred. His gaze was rapid, penetrating and inclusive, but never furtive. He seemed to fit into the picture of the wilderness, as if he had taken a space reserved there for him, and had put himself in complete harmony with all its details.

The long journey from their old home in Maryland had been a source of unending variety and delight to Henry. There had been no painful partings. His mother and his brother and young sister were in the fourth wagon from the right, and his father stood beside it. Farther on in the same company were his uncles and aunts, and many of the old neighbors. All had come together. It was really the removal of a village from an old land to a new one, and with the familiar faces of kindred and friends around them, they were not lonely in strange regions, though mountains frowned and dark forests lowered.

It was to Henry a return rather than a removal. He almost fancied that in some far-off age he had seen all these things before. The forests and the mountains beckoned in friendly fashion; they had no terrors, for even their secrets lay open before him. He seemed to breathe a newer and keener air than that of the old land left behind, and his mind expanded with the thought of fresh pleasures to come. The veteran guide, Ross, alone observed how the boy learned, through intuition, ways of the wilderness that others achieved only by hard experience.

They had met fair weather, an important item in such a journey, and there had been no illness, beyond trifling ailments quickly cured. As they traveled slowly and at their ease, it took them a long time to pass through the settled regions. This part of the journey did not interest Henry so much. He was eager for the forests and the great wilderness where his fancy had already gone before. He wanted to see deer and bears and buffaloes, trees bigger than any that grew in Maryland, and mountains and mighty rivers. But they left the settlements behind at last, and came to the unbroken forest. Here he found his hopes fulfilled. They were on the first slopes of the mountains that divide Virginia from Kentucky, and the bold, wild nature of the country pleased him. He had never seen mountains before, and he felt the dignity and grandeur of the peaks.

Sometimes he went on ahead with Tom Ross, the guide, his chosen friend, and then he considered himself, in very truth, a man, or soon to become one, because he was now exploring the unknown, leading the way for a caravan—and there could be no more important duty. At such moments he listened to the talk of the guide who taught the lesson that in the wilderness it was always important to see and to listen, a thing however that Henry already knew instinctively. He learned the usual sounds of the woods, and if there was any new noise he would see what made it. He studied, too, the habits of the beasts and birds. As for fishing, he found that easy. He could cut a rod with his clasp knife, tie a string to the end of it and a bent pin to the end of a string, and with this rude tackle he could soon catch in the mountain creeks as many fish as he wanted.

Henry liked the nights in the mountains; in which he did not differ from his fellow-travelers. Then the work of the day was done; the wagons were drawn up in a half circle, the horses and the oxen were resting or grazing under the trees, and, as they needed fires for warmth as well as cooking, they built them high and long, giving room for all in front of the red coals if they wished. The forest was full of fallen brushwood, as dry as tinder, and Henry helped gather it. It pleased him to see the flames rise far up, and to hear them crackle as they ate into the heart of the boughs. He liked to see their long red shadows fall across the leaves and grass, peopling the dark forest with fierce wild animals; he would feel all the cosier within the scarlet rim of the firelight. Then the men would tell stories, particularly Ross, the guide, who had wandered much and far in Kentucky. He said that it was a beautiful land. He spoke of the noble forests of beech and oak and hickory and maple, the dense canebrake, the many rivers, and the great Ohio that received them all—the Beautiful River, the Indians called it—and the game, with which forests and open alike swarmed, the deer, the elk, the bear, the panther and the buffalo. Now and then, when the smaller children were asleep in the wagons and the larger ones were nodding before the fires, the men would sink their voices and speak of a subject which made them all look very grave indeed. It sounded like Indians, and the men more than once glanced at their rifles and powderhorns.

But the boy, when he heard them, did not feel afraid. He knew that savages of the most dangerous kind often came into the forests of Kentucky, whither they were going, but he thrilled rather than shivered at the thought. Already he seemed to have the knowledge that he would be a match for them at any game they wished to play.

Henry usually slept very soundly, as became a boy who was on his feet nearly all day, and who did his share of the work; but two or three times he awoke far in the night, and, raising himself up in the wagon, peeped out between the canvas cover and the wooden body. He saw a very black night in which the trees looked as thin and ghostly as shadows, and smoldering fires, beside which two men rifle on shoulder, always watched. Often he had a wish to watch with them, but he said nothing, knowing that the others would hold him too young for the task.

But to-day he felt only joy and curiosity. They were now on the crest of the last mountain ridge and before them lay the great valley of Kentucky; their future home. The long journey was over. The men took off their hats and caps and raised a cheer, the women joined through sympathy and the children shouted, too, because their fathers and mothers did so, Henry's voice rising with the loudest.

A slip of a girl beside Henry raised an applauding treble and he smiled protectingly at her. It was Lucy Upton, two years younger than himself, slim and tall, dark-blue eyes looking from under broad brows, and dark-brown curls, lying thick and close upon a shapely head.

"Are you not afraid?" she asked.

"Of the forests over there in Kentucky. They say that the savages often come to kill."

"We are too strong. I do not fear them."

He spoke without any vainglory, but in the utmost confidence. She glanced covertly at him. He seemed to her strong and full of resource. But she would not show her admiration.

They passed from the mountain slope into a country which now sank away in low, rolling hills like the waves of the sea and in which everything grew very beautiful. Henry had never seen such trees in the East. The beech, the elm, the hickory and the maple reached gigantic proportions, and wherever the shade was not too dense the grass rose heavy and rank. Now and then they passed thickets of canebrake, and once, at the side of a stream, they came to a salt "lick." It was here that a fountain spouted from the base of a hill, and, running only a few feet, emptied into a creek. But its waters were densely impregnated with salt, and all around its banks the soft soil was trodden with hundreds of footsteps.

"The wild beasts made these," said the guide to Henry. "They come here at night: elk, deer, buffalo, wolves, and all the others, big and little, to get the salt. They drink the water and they lick up the salt too from the ground."

A fierce desire laid hold of the boy at these words. He had a small rifle of his own, which however he was not permitted to carry often. But he wanted to take it and lie beside the pool at night when the game came down to drink. The dark would have no terrors for him, nor would he need companionship. He knew what to do, he could stay in the bush noiseless and motionless for hours, and he would choose only the finest of the deer and the bear. He could see himself drawing the bead, as a great buck came down in the shadows to the fountain and he thrilled with pleasure at the thought. Each new step into the wilderness seemed to bring him nearer home.

Their stay beside the salt spring was short, but the next night they built the fire higher than ever because just after dark they heard the howling of wolves, and a strange, long scream, like the shriek of a woman, which the men said was the cry of a panther. There was no danger, but the cries sounded lonesome and terrifying, and it took a big fire to bring back gayety.

The Young Trailers: A Story of Early Kentucky