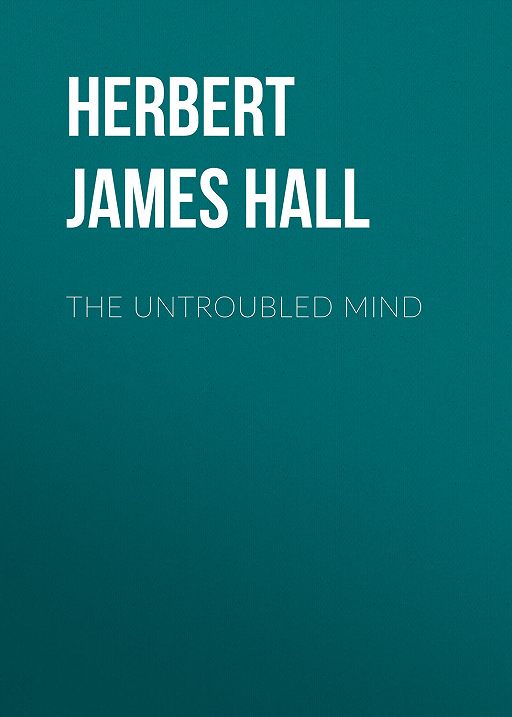 They are not all here, the steps to health and happiness. The reader may even be annoyed and baffled by my indirectness and unwillingness to be specific. That I cannot help—it is a personal peculiarity; I cannot ask any one to live by rule, because I do not believe that rules are binding and final. There must be character behind the rule and then the rule is unnecessary.

All that I have written has doubtless been presented before, in better ways, by wiser men, but I believe that each writer may expect to find his small public, his own particular public who can understand and profit by his teachings, having partly or wholly failed with the others. For that reason I am encouraged to write upon a subject usually shunned by medical men, being assured of at least a small company of friendly readers.

I am grateful to a number of friends and patients who have read the manuscript of the following chapters. These reviewers have been frank and kind and very helpful. I am particularly indebted to Dr. Richard C. Cabot, who has given me much valuable assistance.

I
THE UNTROUBLED MIND


Canst thou not minister to a mind diseas’d,
Pluck from the memory a rooted sorrow,
Raze out the written troubles of the brain,
And with some sweet oblivious antidote
Cleanse the stuff’d bosom of that perilous stuff
Which weighs upon the heart?

When a man tells me he never worries, I am inclined to think that he is either deceiving himself or trying to deceive me. The great roots of worry are conscience, fear, and regret. Undoubtedly we ought to be conscientious and we ought to fear and regret evil. But if it is to be better than an impediment and a harm, our worry must be largely unconscious, and intuitive. The moment we become conscious of worry we are undone. Fortunately, or unfortunately, we cannot leave conscience to its own devices unless our lives are big enough and fine enough to warrant such a course. The remedy for the mental unrest, which is in itself an illness, lies not in an enlightened knowledge of the harmfulness and ineffectiveness of worry, not even in the acquirement of an unconscious conscience, but in the living of a life so full and good that worry cannot find place in it. That idea of worry and conscience, that definition of serenity, simplifies life immensely. To overcome worry by substituting development and growth need never be dull work. To know life in its farther reaches, life in its better applications, is the final remedy—the great undertaking—it is life. We must warn ourselves, not infrequently, that the larger life is to be pursued for its own glorious self and not for the sake of peace. Peace may come, a peace so sure that death itself cannot shake it, but we must not expect all our affairs to run smoothly. As a matter of fact they may run badly enough; we shall have our ups and downs, we shall sin and repent, and sin again, but if in the end we live according to our best intuitions, we shall be justified, and we need not worry about the outcome. To put it another way, if we would have the untroubled mind, we must transfer our conscientious efforts from the small details of life—from the worry and fret of common things—into another and a higher atmosphere. We must transfigure common life, dignify it and ennoble it; then, although the old causes of worry may continue, we shall have gained a stature that will make us unconscious masters of the little troubles and in a great degree equal to the larger requirements. Life will be easier, not because we make less effort, but because we are working from another and a better level.

If such a change, and it would be a change for most of us, could come about instantly, in a flash of revelation, that would be ideal, but it would not be life. We must return again and again to the old uninspired state wherein we struggle conscientiously with perverse details. I would not minimize the importance and value of this struggle; only the sooner it changes its level the better for every one concerned. Large serenity must, finally, be earned through the toughening of moral fibre that comes in dealing squarely with perplexing details. Some of this struggle must always be going on, but serener life will come when we begin to concern ourselves with larger factors.

How are we to live the larger life? Partly through uninspired struggle and through the brave meeting of adversity, but partly, also, in a way that may be described as “out of hand,” by intuition, by exercise of the quality of mind that sees visions and grasps truths beyond the realms of common thought.

I am more and more impressed with the necessity of inspiration in life if we are to be strong and serene, and so finally escape the pitfalls of worry and conscience. By inspirations I do not mean belief in any system or creed. It is not a stated belief that we need to begin with; that may come in time. We need first to find in life, or at least in nature, an essential beauty that makes its own true, inevitable response within us. We must learn to love life so deeply that we feel its tremendous significance, until we find in the sea and the sky the evidence of an overbrooding spirit too great to be understood, but not too great to satisfy the soul. This is a sort of mother religion—the matrix from which all sects and creeds are born. Its existence in us dignifies us and makes simple, purposeful, and receptive living almost inevitable. We may not know why we are living according to the dictates of our inspiration, but we shall live so and that is the important consideration.

If I urge the acquirement of a religious conception that we may cure the intolerable distress of worry, I do what I have already warned against. It is so easy to make this mistake that I have virtually made it on the same page with my warning. We have no right to seek so great a thing as religious experience that we may be relieved of suffering. Better go on with pain and distress than cheapen religion by making it a remedy. We must seek it for its own sake, or rather, we must not seek it at all, lest, like a dream, it elude us, or change into something else, less holy. Nevertheless, it is true that if we will but look with open, unprejudiced eyes, again and again, upon the sunrise or the stars above us, we shall become conscious of a presence greater and more beautiful than our minds can think. In the experience of that vision strength and peace will come to us unbidden. We shall find our lives raised, as by an unseen force, above the warfare of conscience and worry. We shall begin to know the meaning of serenity and of that priceless, if not wholly to be acquired, possession, the untroubled mind.

I am aware that I shall be misunderstood and perhaps ridiculed by my colleagues when I attempt to discuss religion in any way. Theology is a field in which I have had no training, but that is the very reason why I dare write of it. I do not even assume that there is a God in the traditional sense. The idea is too great to be made concrete and literal. No single fact of nature can be fully understood by our finite minds. But I do feel vaguely that the laws that compass us, and make our lives possible, point always on—“beyond the realms of time and space”—toward the existence of a mighty overruling spirit. If this is a cold and inadequate conception of God, it is at least one that can be held by any man without compromise.

The modern mind is apt to fail of religious understanding and support, because of the arbitrary interpretations of religion which are presented for our acceptance. It is what men say about religion, rather than religion itself, that repels us. Let us think it out for ourselves. If we are open to a simple, even primitive, conception of God, we may still repudiate the creeds and doctrines, but we are likely to become more tolerant of those who find them true and good. We shall be likely in time to find the religion of Christ understandable and acceptable—warm and quick with life. The man who ungrudgingly opens his heart to the God of nature will be religious in the simplest possible sense. He may worry because of the things he cannot altogether understand, and because he falls so far short of the implied ideal. But he will have enlarged his life so much that the common worries will find little room—he will be too full of the joy of living to spend much conscious thought in worry. Such a man will realize that he cannot afford to spend his time and strength in regretting his past mistakes. There is too much in the future. What he does in the future, not what he has failed to do in the past, will determine the quality of his life. He knows this, and the knowledge sends him into that future with courage and with strength. Finally, in some indefinable way, character will become more important to him than physical health even. Illness is half compensated when a man realizes that it is not what he accomplishes in the world, but what he is that really counts, which puts him in touch with the creative forces of God and raises him out of the aimless and ordinary into a life of inspiration and joy.