The League of the Leopard 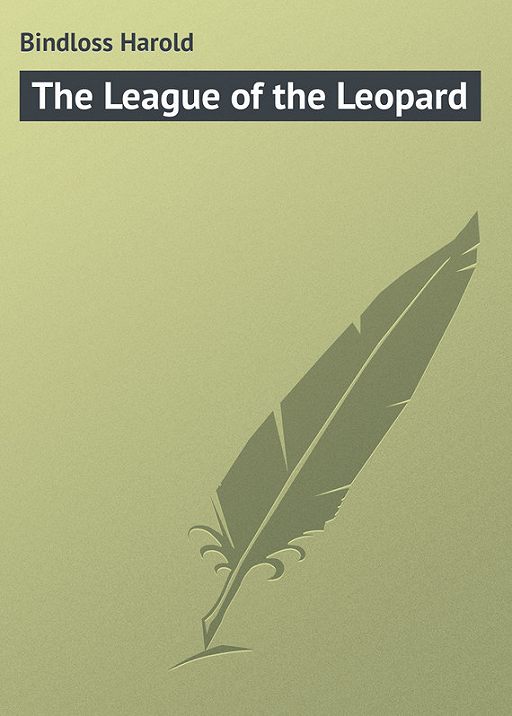 Bindloss Harold
The League of the Leopard

CHAPTER I
A DANGEROUS BEQUEST

It was very hot in the little West African factory where trader Niven lay dying. The sea breeze had died away, and though sunset drew near, it was not yet time for the spicy airs from the inland forest to mitigate the temperature. The dust lay still in the sun-scorched compound, about which the palm fronds hung motionless, and only the roar of breakers on the beach broke through the drowsy silence.

Two white men lounged in cane chairs upon the veranda which encircled the building. Both were limp, gaunt of frame, and pallid in face, because the climate they lived in is particularly unhealthy. Neither had enjoyed much education, or felt the lack of it in the trade they followed, while the cocktail jug on the little table betokened their favorite relaxation. Redmond and Gilby were West Coast traders who lived far remote from intercourse with their fellows, except for the two French rivals with whom they periodically quarreled. They concerned themselves with little beyond the well-being of their factory, and indulged each appetite on opportunity, knowing that on the morrow they might suddenly die. Yet they had their strong points, including a tenacious regard for their employers' interests, which led them to toil twelve hours daily when sick of fever if trade was good, and sometimes defy the French authorities, and an inconsistent generosity, as the result of which they had camped in the store shed, and turned over their own quarters to the man who stood behind them, and his stricken companion. The former was of very different type.

"You have done your best for the poor devil," said Redmond, glancing regretfully from him toward the empty jug. "But if I know anything about coast fever – and I ought to – Niven will get his release to-night. Still rambling about that fortune, I suppose?"

Carsluith Maxwell nodded, and Gilby commented meditatively: "It may be all a fever fancy, and it may be true. Niven was well known in this afflicted colony years ago, and there is gold up yonder. In fact, right away from here to the Volta you can find the color in the rivers, but there's very little of it that will pay for the washing, and few British mining companies that distribute much in dividends. Still, the old Portuguese took a good deal out, if the tales are true, and one gets small lots now and then put up in quills."

"The last quills Gilby took in contained brass filings, and the firm wrote off their nominal value against our commission. Gilby had been drinking cocktails all that day. He may be right about the gold, but it's my firm opinion that unless the French send up a strong column and root out the Leopards, no white man will ever find it. You have heard about them, Maxwell?"

Maxwell was a man of discretion, and though he had ventured beyond the fringe of the Leopards' country, he only said:

"He does not," said Gilby. "Neither does any white man; unless perhaps it's Rideau, or Niven. They are supposed to be members of one of the secret leagues run by the bush magicians in connection with the cult of the Ju-Ju; and if you want to know just what kind of devil a Ju-Ju is, you need not ask me. Anyway, from what one hears, those fellows can't be all impostors. They could apparently give our amateur necromancers points in hypnotism, and what they don't know about poisons is not worth learning. They're no fools at bush politics either; and have managed to run Shaillu's kingdom, and keep white men out of it pretty successfully. It is believed that Shaillu would be glad to rule it without them, in his own way."

Maxwell knew all this, and a little more which his informant apparently did not; but he made no comment, and asked only one question:

"He says he is a Frenchman," answered Gilby. "One would suppose that he ought to know; but after a dispute about the count of some monkey skins, Clancy of Axim once asked in public if there was not a dash of the tar brush in him, and was taken ill suddenly that night – which may, of course, have been a coincidence. In any case, he goes trading inland; and though he brings down a little gum, nobody knows exactly what he buys or sells. As you have heard, it's a ghastly country, and there's a heavy penalty for supplying niggers with modern rifles. The little French commandant would give a good deal to fix a charge on him."

"Thanks. I will remember if I meet him; but it is about time I returned to my patient," said Maxwell, and the other two looked after him until he disappeared round a corner of the dwelling.

"A curious man," Gilby commented. "He's probably like the parrot, for he says very little. Still, it is not everybody who would have turned back with his expedition on the very odd chance of saving a crazy countryman. It is just possible, however, he was glad to, after the bushmen had scared him."

"African parrots never think, unless it's about the pricking inside them," said Redmond. "You wouldn't either, if a nigger had fed you with broken glass, so you'd die as soon as he'd sold you, and keep the demand up. You're wrong, as usual, in other ways, too. If I'm a judge of character, there are no niggers in Africa who could scare that man."

Meanwhile Maxwell had seated himself on the opposite veranda, and, after a glance at a trestle couch which showed him that Niven was apparently asleep, was gazing out to sea. He was close on the age of thirty, of average stature, but spare and sinewy. His sallow face had been further darkened by the African sun, and though now its expression and that of the dark eyes was thoughtful, it was the face of a resolute man. Carsluith Maxwell was also, in a somewhat somber fashion, a handsome man; and though some of his fair acquaintances described him as too silent, and others as too sardonic, all agreed that he was interesting. Maxwell described himself as an individual of unsettled habits, born with fastidious tastes and no means to gratify them – which, he said, explained his wanderings in search of a fortune. He did not add that his chief ambition was to restore to its former prosperity an old Border stronghold which, with every acre of its grass parks and stony plow-land heavily encumbered, stood behind the shores of Solway. Carsluith Maxwell, who some day would be master of Culmeny, had inherited more than a trace of the silent grimness of the old moss-troopers from whom he sprang.

Turning presently, he saw that Niven was wide awake and looking out to sea. Their acquaintance had been brief, and dated from the night when Niven reeled into the camp of a small French expedition, alone, fever-stricken, and half-crazy. Seeing that he would die in the forest when the expedition continued its march, Maxwell abandoned his prospecting journey and turned back to the coast with him. The African malaria often attacks a white man's brain as well as his body; and during most of the time Niven had talked erratically. Now, however, Maxwell noticed that he appeared sensible and sane.

"Good to come back to, isn't it?" he said, glancing at the sea, athwart which the track of the sunset beat luridly. "I used to long for it in the forest when Lyle and I first set up the one factory which ever stood more than twelve months in Shaillu's country. That reminds me! I have a good deal to tell you, and, considering that I may not last out to-morrow, it's high time I began. I have given you a good deal of trouble, but you may not regret it when I have done."

"I shall not regret it in any case," said Maxwell quietly. He was seldom emphatic in speech.

"You are like Lyle, and that's partly why I'm going to tell you. He and I went up into Shaillu's country long ago, and the Leopards tried to poison us. They wanted no white men there, and did not like free trade. They also tried other ways; but if our lives were in our own hands, we held them tight – and any man might face the devil with a partner like Lyle. You will understand presently why I'm commencing at the beginning. Well, we nursed each other through fevers, and twice stood behind a stockade with the rifle barrels burning our hands; but we made money, and I think the Leopards grew afraid of us because we lived in spite of them. Of course, we had our friends, because the brown traders from the North had to pay a heavy toll to the Leopards before we came; and some of them told us about gold having been washed out of a far-off river by niggers who had a poor idea of its value. We were too busy to trouble about ventures of that kind; and as the river flowed through No Man's Land there was nobody to sell us a marketable concession."

The sunset was fading off the waters when Niven paused to gather breath, while his strained voice sank to a deeper tone as he proceeded:

"There was a dispute as to who owned some gum we had paid for, and two men were shot before we convinced the niggers that nobody could lay violent hands upon our property. Then one of Shaillu's sub-headmen, who said there had been a mistake somewhere, summoned us to a palaver to talk the question over. We went, with twenty armed Krooboys scared almost to death, who feared Lyle more than they did the niggers, and were given a fair hearing. Several of the big Leopard men were there, but the headman held us justified, and when we had made everybody a present the palaver ended in revelry. I warned Lyle; but to fear nothing, and be equally ready with smile or pistol, was always my comrade's way.

"We came back safely; but he dragged himself up the stairway with his face all twisted the next night, and I knew what had happened before he told me. 'Those devils have poisoned me,' said he."

It was almost dark now, and the white mist from the forest slid in ghostly wreaths past the little factory. Niven shivered before he proceeded:

"Have you ever seen a comrade poisoned by the bushmen – when they meant to hurt him? No! Then you have something to be thankful for. Lyle, by worse luck, was young and strong, and took an unconscionable time dying; I don't know that I did well when I took the pistol from him. For three mortal hours I suffered all with him, and there was no power left in me when at last he let his head drop on the table. There are things it is not fit to remember which one can never forget. Then I knew all that the man had been to me; and what I must do was plain before me.

The League of the Leopard