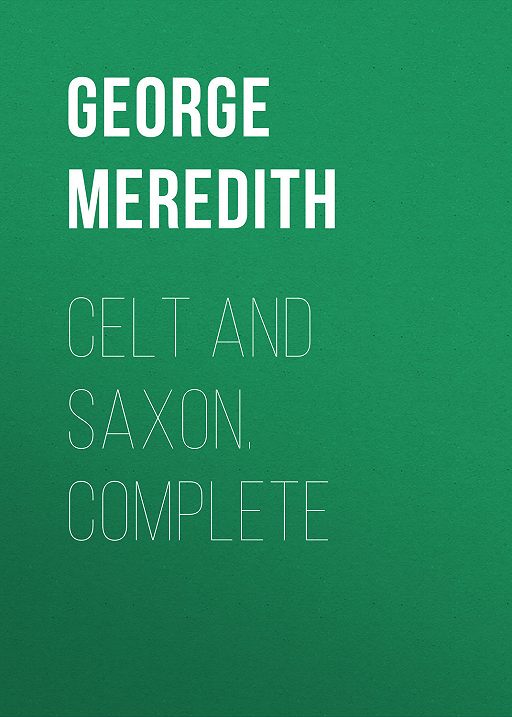 CHAPTER I. WHEREIN AN EXCURSION IS MADE IN A CELTIC MIND

A young Irish gentleman of the numerous clan O’Donnells, and a Patrick, hardly a distinction of him until we know him, had bound himself, by purchase of a railway-ticket, to travel direct to the borders of North Wales, on a visit to a notable landowner of those marches, the Squire Adister, whose family-seat was where the hills begin to lift and spy into the heart of black mountains. Examining his ticket with an apparent curiosity, the son of a greener island debated whether it would not be better for him to follow his inclinations, now that he had gone so far as to pay for the journey, and stay. But his inclinations were also subject to question, upon his considering that he had expended pounds English for the privilege of making the journey in this very train. He asked himself earnestly what was the nature of the power which forced him to do it—a bad genius or a good: and it seemed to him a sort of answer, inasmuch as it silenced the contending parties, that he had been the victim of an impetus. True; still his present position involved a certain outlay of money simply, not at all his bondage to the instrument it had procured for him, and that was true; nevertheless, to buy a ticket to shy it away is an incident so uncommon, that if we can but pause to dwell on the singularity of the act, we are unlikely to abjure our fellowship with them who would not be guilty of it; and therefore, by the aid of his reflections and a remainder of the impetus, Mr. Patrick O’Donnell stepped into a carriage of the train like any ordinary English traveller, between whom and his destination there is an agreement to meet if they can.

It is an experience of hesitating minds, be they Saxon or others, that when we have submitted our persons to the charge of public companies, immediately, as if the renouncing of our independence into their hands had given us a taste of a will of our own, we are eager for the performance of their contract to do what we are only half inclined to; the train cannot go fast enough to please us, though we could excuse it for breaking down; stoppages at stations are impertinences, and the delivery of us at last on the platform is an astonishment, for it is not we who have done it—we have not even desired it. To be imperfectly in accord with the velocity precipitating us upon a certain point, is to be going without our heads, which have so much the habit of supposing it must be whither we intend, when we go in a determined manner, that a doubt of it distracts the understanding—decapitates us; suddenly to alight, moreover, and find ourselves dropped at the heels of flying Time, like an unconsidered bundle, is anything but a reconstruction of the edifice. The natural revelry of the blood in speed suffers a violent shock, not to speak of our notion of being left behind, quite isolated and unsound. Or, if you insist, the condition shall be said to belong exclusively to Celtic nature, seeing that it had been drawn directly from a scion of one of those tribes.

Young Patrick jumped from the train as headless as good St. Denis. He was a juvenile thinker, and to discover himself here, where he both wished and wished not to be, now deeming the negative sternly in the ascendant, flicked his imagination with awe of the influence of the railway service upon the destinies of man. Settling a mental debate about a backward flight, he drove across the land so foreign to his eyes and affections, and breasted a strong tide of wishes that it were in a contrary direction. He would rather have looked upon the desert under a sand-storm, or upon a London suburb yet he looked thirstingly. Each variation of landscape of the curved highway offered him in a moment decisive features: he fitted them to a story he knew: the whole circle was animated by a couple of pale mounted figures beneath no happy light. For this was the air once breathed by Adiante Adister, his elder brother Philip’s love and lost love: here she had been to Philip flame along the hill-ridges, his rose-world in the dust-world, the saintly in his earthly. And how had she rewarded him for that reverential love of her? She had forborne to kill him. The bitter sylph of the mountain lures men to climb till she winds them in vapour and leaves them groping, innocent of the red crags below. The delicate thing had not picked his bones: Patrick admitted it; he had seen his brother hale and stout not long back. But oh! she was merciless, she was a witch. If ever queen-witch was, she was the crowned one!

For a personal proof, now: he had her all round him in a strange district though he had never cast eye on her. Yonder bare hill she came racing up with a plume in the wind: she was over the long brown moor, look where he would: and vividly was she beside the hurrying beck where it made edges and chattered white. He had not seen, he could not imagine her face: angelic dashed with demon beauty, was his idea of the woman, and there is little of a portrait in that; but he was of a world where the elemental is more individual than the concrete, and unconceived of sight she was a recognised presence for the green-island brain of a youth whose manner of hating was to conjure her spirit from the air and let fly his own in pursuit of her.

It has to be stated that the object of the youngster’s expedition to Earlsfont was perfectly simple in his mind, however much it went against his nature to perform it. He came for the purpose of obtaining Miss Adister’s Continental address; to gather what he could of her from her relatives, and then forthwith to proceed in search of her, that he might plead with her on behalf of his brother Philip, after a four years’ division of the lovers. Could anything be simpler? He had familiarised himself with the thought of his advocacy during those four years. His reluctance to come would have been accountable to the Adisters by a sentiment of shame at his family’s dealings with theirs: in fact, a military captain of the O’Donnells had in old days played the adventurer and charmed a maid of a certain age into yielding her hand to him; and the lady was the squire of Earlsfont’s only sister: she possessed funded property. Shortly after the union, as one that has achieved the goal of enterprise, the gallant officer retired from the service nor did north-western England put much to his credit the declaration of his wife’s pronouncing him to be the best of husbands. She naturally said it of him in eulogy; his own relatives accepted it in some contempt, mixed with a relish of his hospitality: his wife’s were constant in citing his gain by the marriage. Could he possibly have been less than that? they exclaimed. An excellent husband, who might easily have been less than that, he was the most devoted of cousins, and the liberal expenditure of his native eloquence for the furtherance of Philip’s love-suit was the principal cause of the misfortune, if misfortune it could subsequently be called to lose an Adiante.

The Adister family were not gifted to read into the heart of a young man of a fanciful turn. Patrick had not a thought of shame devolving on him from a kinsman that had shot at a mark and hit it. Who sees the shame of taking an apple from a garden of the Hesperides? And as England cultivates those golden, if sometimes wrinkled, fruits, it would have seemed to him, in thinking about it, an entirely lucky thing for the finder; while a question of blood would have fired his veins to rival heat of self-assertion, very loftily towering: there were Kings in Ireland: cry for one of them in Uladh and you will hear his name, and he has descendants yet! But the youth was not disposed unnecessarily to blazon his princeliness. He kept it in modest reserve, as common gentlemen keep their physical strength. His reluctance to look on Earlsfont sprang from the same source as unacknowledged craving to see the place, which had precipitated him thus far upon his road: he had a horror of scenes where a faithless girl had betrayed her lover. Love was his visionary temple, and his idea of love was the solitary light in it, painfully susceptible to coldair currents from the stories of love abroad over the world. Faithlessness he conceived to be obnoxious to nature; it stained the earth and was excommunicated; there could be no pardon of the crime, barely any for repentance. He conceived it in the feminine; for men are not those holy creatures whose conduct strikes on the soul with direct edge: a faithless man is but a general villain or funny monster, a subject rejected of poets, taking no hue in the flat chronicle of history: but a faithless woman, how shall we speak of her! Women, sacredly endowed with beauty and the wonderful vibrating note about the very mention of them, are criminal to hideousness when they betray. Cry, False! on them, and there is an instant echo of bleeding males in many circles, like the poor quavering flute-howl of transformed beasts, which at some remembering touch bewail their higher state. Those women are sovereignly attractive, too, loathsomely. Therein you may detect the fiend.

Our moralist had for some time been glancing at a broad, handsome old country mansion on the top of a wooded hill backed by a swarm of mountain heads all purple-dark under clouds flying thick to shallow, as from a brush of sepia. The dim silver of half-lighted lakewater shot along below the terrace. He knew the kind of sky, having oftener seen that than any other, and he knew the house before it was named to him and he had flung a discolouring thought across it. He contemplated it placably and studiously, perhaps because the shower-folding armies of the fields above likened its shadowed stillness to that of his Irish home. There had this woman lived! At the name of Earlsfont she became this witch, snake, deception. Earlsfont was the title and summary of her black story: the reverberation of the word shook up all the chapters to pour out their poison.