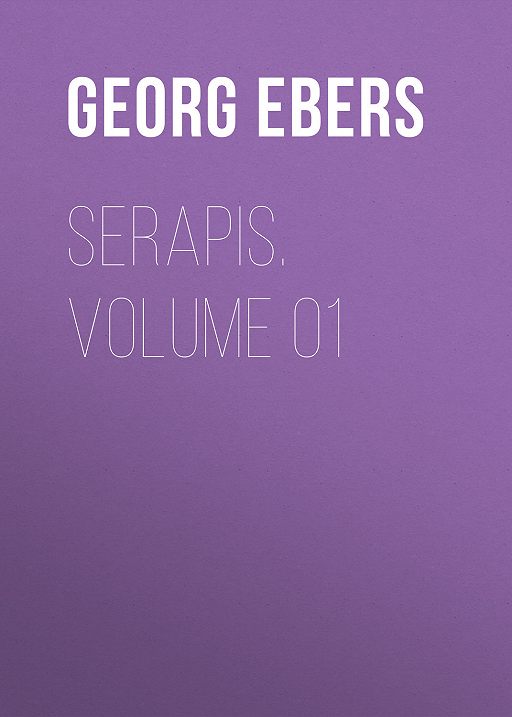 The busy turmoil of the town had been hushed for some hours; the moon and stars were keeping silent watch over Alexandria, and many of the inhabitants were already in the land of dreams. It was deliciously fresh —a truly gracious night; but, though peace reigned in the streets and alleys, even now there was in this pause for rest a lack of the soothing calm which refreshes and renews the spirit of man. For some few weeks there had been an oppressive and fevered tension in the repose of night. Every house and shop was closed as securely as though it were done, not only to secure slumber against intrusion, but to protect life and property from the spoiler; and instead of tones of jollity and mirth the sleeping city echoed the heavy steps and ringing arms of soldiers. Now and again, when the Roman word of command or the excited cry of some sleepless monk broke the silence, shops and doors were cautiously opened and an anxious face peered out, while belated wanderers shrunk into gateways or under the black shadow of a wall as the watch came past. A mysterious burden weighed on the Heart of the busy city and clicked its pulses, as a nightmare oppresses the dreamer.

On this night of the year of our Lord 391, in a narrow street leading from the commercial harbor known as Kibotus, an old man was slinking along close to the houses. His clothes were plain but decent, and he walked with his head bent forward looking anxiously on all sides; when the patrol came by he shrank into the shadow; though he was no thief he had his reasons for keeping out of the way of the soldiery, for the inhabitants, whether natives or strangers, were forbidden to appear in the streets after the harbor was closed for the night.

He stopped in front of a large house, whose long, windowless wall extended from one side street to the next, and pausing before the great gate, he read an inscription on which the light fell from a lamp above: The House of the Holy Martyr. His widow here offers shelter to all who need it. He that giveth to the poor lendeth to the Lord."

"At how much per cent I wonder?" mattered the old man and a satirical smile curled his bearuless lips. A heavy thud with the knocker rang through the silent street, and after a few short questions from within and equally curt replies from without, a small door was opened in the great gate. The stranger was on the point of crossing the vestibule when a human creature crept up to him on all fours, and clutched his ancle with a strong hand, exclaiming in a hoarse voice: "As soon as the door is shut—an entrance fee; for the poor, you know."

The old man flung a copper piece to the gatekeeper who tried it, and then, holding on to the rope by which he was tied to a post like a watch- dog, he whined out "Not a drop to wet a Christian's lips?"

"It has not rained for some time," retorted the stranger, who proceeded to open a second door which led into a vast court-yard open to the blue vault of heaven. A few torches stuck against the pillars and a small fire on the pavement added thin smoky, flickering light to the clear glory of the stars, and the whole quadrangle was full of a heavy, reeking atmosphere, compounded of smoke and the steam of hot food.

Even in the street the wanderer had heard the dull buzz and roar which now met his ear as a loud medley of noises and voices, rising from hundreds of men who were encamped in the wide space before him—in groups or singly, sleeping and snoring, or quarrelling, eating, talking and singing as they squatted on the ground which was strewn with straw.

The inn was full, and more than half of the humble guests were monks who, during the last two days, had flowed into the city from every Cenoby, Laura and hermitage in the desert, and from most of the monasteries in the surrounding district—the 'Nitriote Nome'. Some of them had laid their heads close together for confidential whispering, others squabbled loudly, and a large group in the northern angle of the court had raised a psalm which mingled strangely with the "three," "four," "seven," of the men who were playing 'mora', and the cry of the cook inviting purchasers to his stall spread with meat, bread, and onions.

At the end of the court furthest from the gateway there was a covered way, on to which a row of doors opened leading to the rooms devoted to families of women and children, each apartment being divided into two by a curtain across the middle. The stranger made his way into one of these rooms, where he was warmly welcomed by a young man, who was occupied in cutting a Kopais reed into a mouth-piece for a double flute, and by a tall matronly woman.

The new-comer's name was Karnis and he was the head of a family of wandering singers who had arrived in Alexandria only the day before from Rome. His surroundings were poor and mean, for their ship had been attacked off the African coast by a band of pirates, and though they had saved their lives they had lost everything they possessed. The young owner of the vessel, to whom he owed his safety, had procured him admission to this Xenodochium,—[a refuge or inn]—kept by his mother the Widow Mary; Karnis had, however, found it far from comfortable, and had gone forth at noon to seek other quarters.

"All in vain!" said he, as he wiped the heat drops from his forehead. "I have hunted Medius half the city through and found him at last at the house of Posidonius the Magian, whose assistant he is. There was singing behind a curtain—wretched rubbish; but there were some old airs too with an accompaniment on the flutes, in the style of Olympus, and really not so bad.

"Then spirits appeared. By Sirius a queer business altogether! Medius is in the midst of it all. I arranged the chorus and sang with them a little. All I got for it was a little dirty silver—there! But as for a lodging—free quarters!—there are none to be found here for anything above an owl; and then there is the edict—that cursed edict!"

During this speech the younger man had exchanged meaning glances with his mother. He now interrupted Karnis, saying in a tone of encouragement:

"Never mind, father; we have something good in view."

"You have?" said the old man with an incredulous shrug, while his wife served him with a small roast chicken, on a stool which did duty for a table.

"Yes father, we!" the lad went on, laying aside his knife. "You know we vowed an offering to Dionysus for our escape, since he himself once fell into the hands of pirates, so we went at once to his temple. Mother knew the way; and as we—she, I mean, and Dada and myself. . ."

"Heh! what is this?" interrupted Karnis, now for the first time noticing the dish before him. "A fowl—when we are so miserably poor? A whole fowl, and cooked with oil?" He spoke angrily, but his wife, laying her hand on his shoulder, said soothingly:

"We shall soon earn it again. Never a sesterce was won by fretting.

Enjoy to-day's gifts and the gods will provide for to-morrow."

"Indeed?" asked Karnis in an altered key. "To be sure when a roast fowl flies into one's mouth instead of a pigeon … But you are right as usual, Herse, as usual, only—here am I battening like a senator while you—I lay a wager you have drunk nothing but milk all day and eaten nothing but bread and radishes. I thought so? Then the chicken must pretend to be a pheasant and you, wife, will eat this leg. The girls are gone to bed? Why here is some wine too! Fill up your cup, boy. A libation to the God! Glory to Dionysus !" The two men poured the libation on the floor and drank; then the father thrust his knife into the breast of the bird and began his meal with a will, while Orpheus, the son, went on with his story:

"Well, the temple of Dionysus was not to be found, for Bishop Theophilus has had it destroyed; so to what divinity could we offer our wreath and cake? Here in Egypt there is none but the great Mother Isis. Her sanctuary is on the shore of Lake Mareotis and mother found it at once. There she fell into conversation with a priestess who, as soon as she learnt that my mother belonged to a family of musicians—though Dame Herse was cautious in announcing this fact—and hoped to find employment in Alexandria, led her away to a young lady who was closely veiled. This lady," Orpheus went on—he not only played the flute but took the higher parts for a man's voice and could also strike the lyre—"desired us to go to her later at her own house, where she would speak with us. She drove off in a fine carriage and we, of course followed her orders; Agne was with us too. A splendid house! I never saw anything handsomer in Rome or Antioch.