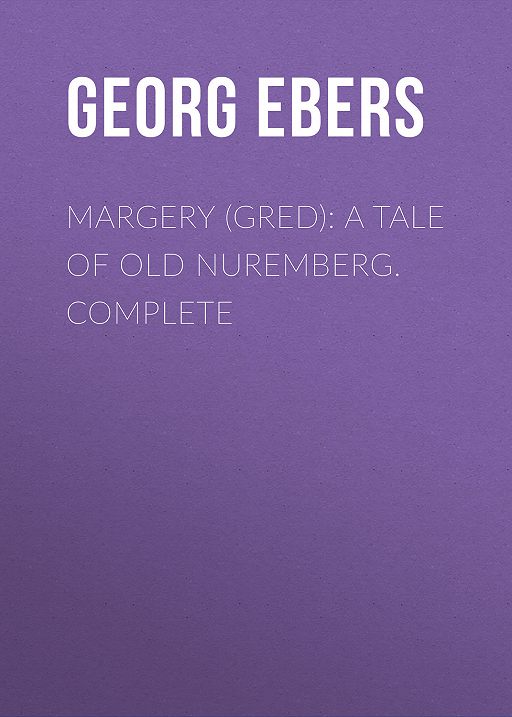 In translating what is supposed to be a transcript into modern German of the language of Nuremberg in the fifteenth century, I have made no attempt to imitate English phraseology of the same date. The difficulty would in fact be insuperable to the writer and the annoyance to the reader almost equally great.

I have merely endeavored to avoid essentially modern words and forms of speech.

“PIETRO GIUSTINIANI, merchant, of Venice.” This was the signature affixed to his receipt by the little antiquary in the city of St. Mark, from whom I purchased a few stitched sheets of manuscript. What a name and title!

As I remarked on the splendor of his ancestry he slapped his pocket, and exclaimed, half in pride and half in lamentation:

“Yes, they had plenty of money; but what has become of it?”

“And have you no record of their deeds?” I asked the little man, who himself wore a moustache with stiff military points to it.

“Their deeds!” he echoed scornfully. “I wish they had been less zealous in their pursuit of fame and had managed their money matters better!—Poor child!”

And he pointed to little Marietta who was playing among the old books, and with whom I had already struck up a friendship. She this day displayed some strange appendage in the lobes of her ears, which on closer examination I found to be a twist of thread.

The child’s pretty dark head was lying confidentially against my arm and as, with my fingers, I felt this singular ornament, I heard, from behind the little desk at the end of the counter, her mother’s shrill voice in complaining accents: “Aye, Sir, it is a shame in a family which has given three saints to the Church—Saint Nicholas, Saint Anna, and Saint Eufemia, all three Giustinianis as you know—in a family whose sons have more than once worn a cardinal’s hat—that a mother, Sir, should be compelled to let her own child—But you are fond of the little one, Sir, as every one is hereabout. Heh, Marietta! What would you say if the gentleman were to give you a pair of ear-rings, now; real gold ear-rings I mean? Thread for ear-rings, Sir, in the ears of a Giustiniani! It is absurd, preposterous, monstrous; and a right-thinking gentleman like you, Sir, will never deny that.”

How could I neglect such a hint; and when I had gratified the antiquary’s wife, I could reflect with some pride that I might esteem myself a benefactor to a family which boasted of its descent from the Emperor Justinian, which had been called the ‘Fabia gens’ of Venice, and, in its day had given to the Republic great generals, far-seeing statesmen, and admirable scholars.

When, at length, I had to quit the city and took leave of the curiosity-dealer, he pressed my hand with heartfelt regret; and though the Signora Giustiniani, as she pocketed a tolerably thick bundle of paper money, looked at me with that kindly pity which a good woman is always ready to bestow on the inexperienced, especially when they are young, that, no doubt, was because the manuscript I had acquired bore such a dilapidated appearance. The margins of the thick old Nuremberg paper were eaten into by mice and insects, in many places black patches like tinder dropped away from the yellow pages; indeed, many passages of the once clear writing had so utterly faded that I scarcely hoped to see them made legible again by the chemist’s art. However, the contents of the document were so interesting and remarkable, so unique in relation to the time when it was written, that they irresistibly riveted my attention, and in studying them I turned half the night into day. There were nine separate parts. All, except the very last one, were in the same hand, and they seemed to have formed a single book before they were torn asunder. The cover and title-page were lost, but at the head of the first page these words were written in large letters: “The Book of my Life.” Then followed a long passage in crude verse, very much to this effect.


“What we behold with waking Eye
Can, to our judgment, never lie,
And what through Sense and Sight we gain.
Becometh part of Soul and Brain.
Look round the World in which you dwell
Nor, Snail-like, live within your Shell;
And if you see His World aright
The Lord shall grant you double Sight.
For, though your Mind and Soul be small,
If you but open them to all
The great wide World, they will expand
Those glorious Things to understand.
When Heart and Brain are great with Love
Man is most like the Lord above.
Look up to Him with patient Eye
Not on your own Infirmity.
In pious Trust yourself forget
For others only toil and fret,
Since all we do for fellow Men
With right good Will, shall be our Gain.
What if the Folk should call you Fool
Care not, but act by Virtue’s Rule,
Contempt and Curses let them fling,
God’s Blessing shields you from their Sting.
Grey is my Head but young my Heart;
In Nuremberg, ere I depart,
Children and Grandchildren, for you
I write this Book, and it is true.”

Below the verses the text of the narrative began with these words: “In the yere of our Lord M/CCCC/lx/VI dyd I begynne to wrtre in thys lytel Boke thys storie of my lyf, as I haue lyued it.”

It was in her sixty-second year that the writer had first begun to note down her reminiscences. This becomes clear as we go on, but it may be gathered from the first lines on the second page which begins thus:

“I, Margery Schopper, was borne in the yere of our Lord M/CCCC/IV on a Twesday after ‘Palmarum’ Sonday, at foure houris after mydnyght.

Myn uncle Kristan Pfinzing was god sib to me in my chrystening. My fader, God assoyle his soul, was Franz Schopper, iclyped the Singer.

He dyed on a Monday after ‘Laetare’—[The fourth Sunday in Lent.]– Sonday M/CCCC/IV. And he hadde to wyf Kristine Peheym whyche was my moder. Also she bare to hym my brethren Herdegen and Kunz Schopper.

My moder dyed in the vigil of Seint Kateryn M/CCCC/V. Thus was I refte of my moder whyle yet a babe; also the Lord broughte sorwe upon me in that of hys grace He callyd my fader out of thys worlde before that ever I sawe the lyght of dai.”

These few lines, which I read in the little antiquary’s shop, betrayed me to my ruin; for, in my delight at finding the daily journal of a German housewife of the beginning of the fifteenth century my heart overflowed; forgetting all prudence I laughed aloud, exclaiming “splendid,” “wonderful,” “what a treasure!” But it would have been beyond all human power to stand speechless, for, as I read on, I found things which far exceeded my fondest expectations. The writer of these pages had not been content, like the other chroniclers of her time and of her native town-such as Ulman Stromer, Andres Tucher and their fellows—to register notable facts without any connection, the family affairs, items of expenditure and mercantile measures of her day; she had plainly and candidly recorded everything that had happened to her from her childhood to the close of her life. This Margery had inherited some of her father’s artistic gifts; he is mentioned in Ulman Stromer’s famous chronicle, where he is spoken of as “the Singer.” It was to her mother, however, that she owed her bold spirit, for she was a Behaim, cousin to the famous traveller Behaim of Schwarzbach, whose mother is known to have been one of the Schopper family, daughter to Herdegen Schopper.

In the course of a week I had not merely read the manuscript, but had copied a great deal of what seemed to me best worth preservation, including the verses. I subsequently had good reason to be glad that I had taken so much pains, though travelling about at the time; for a cruel disaster befel the trunk in which the manuscript was packed, with other books and a few treasures, and which I had sent home by sea. The ship conveying them was stranded at the mouth of the Elbe and my precious manuscript perished miserably in the wreck.

The nine stitched sheets, of which the last was written by the hand of Margery Schopper’s younger brother, had found their way to Venice—as was recorded on the last page—in the possession of Margery’s great-grandson, who represented the great mercantile house of Im Hoff on the Fondaco, and who ultimately died in the City of St. Mark. When that famous firm was broken up the papers were separated from their cover and had finally fallen into the hands of the curiosity dealer of whom I bought them. And after surviving travels on land, risk of fire, the ravages of worms and the ruthlessness of man for four centuries, they finally fell a prey to the destructive fury of the waves; but my memory served me well as to the contents, and at my bidding was at once ready to aid me in restoring the narrative I had read. The copied portions were a valuable aid, and imagination was able to fill the gaps; and though it failed, no doubt, to reproduce Margery Schopper’s memoirs phrase for phrase and word for word, I have on the whole succeeded in transcribing with considerable exactitude all that she herself had thought worthy to be rescued from oblivion. Moreover I have avoided the repetition of the mode of talk in the fifteenth century, when German was barely commencing to be used as a written language, since scholars, writers, and men of letters always chose the Latin tongue for any great or elegant intellectual work. The narrator’s expressions would only be intelligible to a select few, and, I should have done my Margery injustice, had I left the ideas and descriptions, whose meaning I thoroughly understood, in the clumsy form she had given them. The language of her day is a mirror whose uneven surface might easily reflect the fairest picture in blurred or distorted out lines to modern eyes. Much, indeed which most attracted me in her descriptions will have lost its peculiar charm in mine; as to whether I have always supplemented her correctly, that must remain an open question.

I have endeavored to throw myself into the mind and spirit of my Margery and repeat her tale with occasional amplification, in a familiar style, yet with such a choice of words as seems suitable to the date of her narrative. Thus I have perpetuated all that she strove to record for her descendants out of her warm heart and eager brain; though often in mere outline and broken sentences, still, in the language of her time and of her native province.