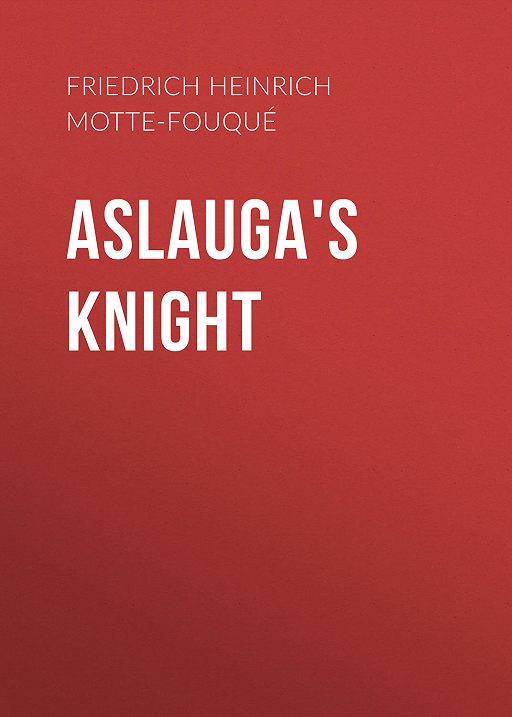 Many years ago there lived in the island of Fuhnen a noble knight, called Froda, the friend of the Skalds, who was so named because he not only offered free hospitality in his fair castle to every renowned and noble bard, but likewise strove with all his might to discover those ancient songs, and tales, and legends which, in Runic writings or elsewhere, were still to be found; he had even made some voyages to Iceland in search of them, and had fought many a hard battle with the pirates of those seas—for he was also a right valiant knight, and he followed his great ancestors not only in their love of song, but also in their bold deeds of arms. Although he was still scarcely beyond the prime of youth, yet all the other nobles in the island willingly submitted themselves to him, whether in council or in war; nay, his renown had even been carried ere now over the sea to the neighbouring land of Germany.

One bright autumn evening this honour-loving knight sat before his castle, as he was often wont to do, that he might look far and wide over land and sea, and that he might invite any travellers who were passing by, as was his custom, to share in his noble hospitality.

But on this day he saw little of all that he was accustomed to look upon; for on his knees there lay an ancient book with skilfully and richly painted characters, which a learned Icelander had just sent to him across the sea: it was the history of Aslauga, the fair daughter of Sigurd, who at first, concealing her high birth, kept goats among the simple peasants of the land, clothed in mean attire; then, in the golden veil of her flowing hair, won the love of King Ragnar Lodbrog; and at last shone brightly on the Danish throne as his glorious queen, till the day of her death.

To the Knight Froda it seemed as though the gracious Lady Aslauga rose in life and birth before him, so that his calm and steadfast heart, true indeed to ladies’ service, but never yet devoted to one particular female image, burst forth in a clear flame of love for the fair daughter of Sigurd. “What matters it,” thought he to himself, “that it is more than a hundred years since she disappeared from earth? She sees so clearly into this heart of mine—and what more can a knight desire? wherefore she shall henceforth be my honoured love, and shall inspire me in battle and in song.” And therewith he sang a lay on his new love, which ran in the following manner:


“They ride over hill and dale apace
To seek for their love the fairest face—
They search through city and forest-glade
To find for their love the gentlest maid—
They climb wherever a path may lead
To seek the wisest dame for their meed.
Ride on, ye knights: but ye never may see
What the light of song has shown to me:
Loveliest, gentlest, and wisest of all,
Bold be the deeds that her name shall recall;
What though she ne’er bless my earthly sight?
Yet death shall reveal her countenance bright.
Fair world, good night!  Good day, sweet love!
Who seeks here in faith shall find above.”

“Such purpose may come to good,” said a hollow voice near the knight; and when he looked round, he saw the form of a poor peasant woman, so closely wrapped in a grey mantle that he could not discern any part of her countenance. She looked over his shoulder on the book, and said, with a deep sigh, “I know that story well; and it fares no better with me than with the princess of whom it tells.” Froda looked at her with astonishment. “Yes, yes,” pursued she, with strange becks and nods; “I am the descendant of the mighty Rolf, to whom the fairest castles and forests and fields of this island once belonged; your castle and your domains, Froda, amongst others, were his. We are now cast down to poverty; and because I am not so fair as Aslauga there is no hope that my possessions will be restored to me; and therefore I am fain to veil my poor face from every eye.” It seemed that she shed warm tears beneath her mantle. At this Froda was greatly moved, and begged her, for God’s sake, to let him know how he could help her, for that he was a descendant of the famous northern heroes of the olden time; and perhaps yet something more than they—namely, a good Christian. “I almost think,” murmured she from beneath her covering, “that you are that very Froda whom men call the Good, and the friend of the Skalds, and of whose generosity and mildness such wonderful stories are told. If it be so, there may be help for me. You need only give up to me the half of your fields and meadows, and I should be in a condition to live in some measure such a life as befits the descendant of the mighty Rolf.” Then Froda looked thoughtfully on the ground; partly because she had asked for so very much; partly, also, because he was considering whether she could really be descended from the powerful Rolf. But the veiled form said, after a pause, “I must have been mistaken, and you are not indeed that renowned, gentle-hearted Froda: for how could he have doubted so long about such a trifle? But I will try the utmost means. See now! for the sake of the fair Aslauga, of whom you have both read and sang—for the sake of the honoured daughter of Sigurd, grant my request!” Then Froda started up eagerly, and cried, “Let it be as you have said!” and gave her his knightly hand to confirm his words. But he could not grasp the hand of the peasant-woman, although her dark form remained close before him. A secret shudder began to run through his limbs, whilst suddenly a light seemed to shine forth from the apparition—a golden light—in which she became wholly wrapped; so that he felt as though Aslauga stood before him in the flowing veil of her golden hair, and smiling graciously on him. Transported and dazzled, he sank on his knees. When he rose up once more he only saw a cloudy mist of autumn spreading over the meadow, fringed at its edges with lingering evening lights, and then vanishing far over the waves. The knight scarcely knew what had happened to him. He returned to his chamber buried in thought, and sometimes feeling sure that he had beheld Aslauga, sometimes, again, that some goblin had risen before him with deceitful tricks, mocking in spiteful wise the service which he had vowed to his dead mistress. But henceforth, wherever he roved, over valley or forest or heath, or whether he sailed upon the waves of the sea, the like appearances met him. Once he found a lute lying in a wood, and drove a wolf away from it, and when sounds burst from the lute without its being touched a fair child rose up from it, as of old Aslauga herself had done. At another time he would see goats clambering among the highest cliffs by the sea-shore, and it was a golden form who tended them. Then, again, a bright queen, resplendent in a dazzling bark, would seem to glide past him, and salute him graciously,—and if he strove to approach any of those he found nothing but cloud, and mist, and vapour. Of all this many a lay might be sung. But so much he learnt from them all—that the fair Lady Aslauga accepted his service, and that he was now indeed and in truth become her knight.

Meanwhile the winter had come and gone. In northern lands this season never fails to bring to those who understand and love it many an image full of beauty and meaning, with which a child of man might well be satisfied, so far as earthly happiness can satisfy, through all his time on earth. But when the spring came glancing forth with its opening buds and flowing waters there came also bright and sunny tidings from the land of Germany to Fuhnen.

There stood on the rich banks of the Maine, where it pours its waters through the fertile land of Franconia, a castle of almost royal magnificence, whose orphan-mistress was a relation of the German emperor. She was named Hildegardis; and was acknowledged far and wide as the fairest of maidens. Therefore her imperial uncle wished that she should wed none but the bravest knight who could anywhere be met with.