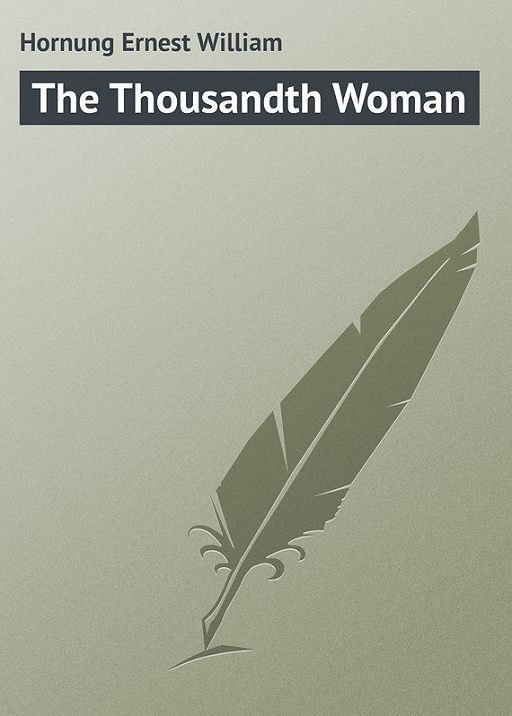 I
A SMALL WORLD

Cazalet sat up so suddenly that his head hit the woodwork over the upper berth. His own voice still rang in his startled ears. He wondered how much he had said, and how far it could have carried above the throb of the liner's screws and the mighty pounding of the water against her plates. Then his assembling senses coupled the light in the cabin with his own clear recollection of having switched it off before turning over. And then he remembered how he had been left behind at Naples, and rejoined the Kaiser Fritz at Genoa, only to find that he no longer had a cabin to himself.

A sniff assured Cazalet that he was neither alone at the moment nor yet the only one awake; he pulled back the swaying curtain, which he had taken to keeping drawn at night; and there on the settee, with the thinnest of cigarettes between his muscular fingers, sat a man with a strong blue chin and the quizzical solemnity of an animated sphinx.

It was his cabin companion, an American named Hilton Toye, and Cazalet addressed him with nervous familiarity.

"I say! Have I been talking in my sleep?"

"Why, yes!" replied Hilton Toye, and broke into a smile that made a human being of him.

Cazalet forced a responsive grin, as he reached for his own cigarettes. "What did I say?" he asked, with an amused curiosity at variance with his shaking hand and shining forehead.

Toye took him in from crown to fingertips, with something deep behind his kindly smile. "I judge," said he, "you were dreaming of some drama you've been seeing ashore, Mr. Cazalet."

"Dreaming!" said Cazalet, wiping his face. "It was a nightmare! I must have turned in too soon after dinner. But I should like to know what I said."

"It's true," said Cazalet, shuddering. "I saw him lying dead, in my dream."

Hilton Toye took a gold watch from his waistcoat pocket. "Thirteen minutes to one in the morning," he said, "and now it's September eighteenth. Take a note of that, Mr. Cazalet. It may be another case of second sight for your psychical research society."

"I don't care if it is." Cazalet was smoking furiously.

"Meaning it was no great friend you dreamed was dead?"

"No friend at all, dead or alive!"

"I'm kind of wondering," said Toye, winding his watch up slowly, "if he's by way of being a friend of mine. I know a Henry Craven over in England. Lives along the river, down Kingston way, in a big house."

The man in the upper berth had to hold on as his curtains swung clear; the man tilted back on the settee, all attention all the time, was more than ever an effective foil to him. Without the kindly smile that went as quickly as it came, Hilton Toye was somber, subtle and demure. Cazalet, on the other hand, was of sanguine complexion and impetuous looks. He was tanned a rich bronze about the middle of the face, but it broke off across his forehead like the coloring of a meerschaum pipe. Both men were in their early prime, and each stood roughly for his race and type: the traveled American who knows the world, and the elemental Britisher who has made some one loose end of it his own.

"I thought of my Henry Craven," continued Toye, "as soon as ever you came out with yours. But it seemed a kind of ordinary name. I might have known it was the same if I'd recollected the name of his firm. Isn't it Craven & Cazalet, the stockbrokers, down in Tokenhouse Yard?"

"That's it," said Cazalet bitterly. "But there have been none of us in it since my father died ten years ago."

"Then no wonder you dream about Henry Craven," cried Toye, "and no wonder it wouldn't break your heart if your dream came true."

"It wouldn't," said Cazalet through his teeth. "He wasn't a white man to me or mine – whatever you may have found him."

"But you seem to know a good deal about him?"

"I had a little place near his one summer. I know only what I heard down there."

"What did you hear?" asked Cazalet. "I've been away ten years, ever since the crash that ruined everybody but the man at the bottom of the whole thing. It would be a kindness to tell me what you heard."

"Well, I guess you've said it yourself right now. That man seems to have beggared everybody all around except himself; that's how I make it out," said Hilton Toye.

"He did worse," said Cazalet through his teeth. "He killed my poor father; he banished me to the wilds of Australia; and he sent a better man than himself to prison for fourteen years!"

Toye opened his dark eyes for once. "Is that so? No. I never heard that," said he.

"You hear it now. He did all that, indirectly, and I don't care who hears me say so. I didn't realize it at the time. I was too young, and the whole thing laid me out too flat; but I know it now, and I've known it long enough. It was worse than a crash. It was a scandal. That was what finished us off, all but Henry Craven! There'd been a gigantic swindle – special investments recommended by the firm, bogus certificates and all the rest of it. We were all to blame, of course. My poor father ought never to have been a business man at all; he should have been a poet. Even I – I was only a youngster in the office, but I ought to have known what was going on. But Henry Craven did know. He was in it up to the neck, though a fellow called Scruton did the actual job. Scruton got fourteen years – and Craven got our old house on the river!"

"And feathered it pretty well!" said Toye, nodding. "Yes, I did hear that. And I can tell you they don't think any better of him, in the neighborhood, for going to live right there. But how did he stop the other man's mouth, and – how do you know?"

"Never mind how I know," said Cazalet. "Scruton was a friend of mine, though an older man; he was good to me, though he was a wrong 'un himself. He paid for it – paid for two – that I can say! But he was engaged to Ethel Craven at the time, was going to be taken into partnership on their marriage, and you can put two and two together for yourself."

"About as long as you'd expect of the breed! She was her father's daughter. I wonder you didn't come across her and her husband!"

"I didn't see so much of the Craven crowd," replied Hilton Toye. "I wasn't stuck on them either. Say, Cazalet, I wouldn't be that old man when Scruton comes out, would you?"

But Cazalet showed that he could hold his tongue when he liked, and his grim look was not so legible as some that had come and gone before. This one stuck until Toye produced a big flask from his grip, and the talk shifted to less painful ground. It was the last night in the Bay of Biscay, and Cazalet told how he had been in it a fortnight on his way out by sailing-vessel. He even told it with considerable humor, and hit off sundry passengers of ten years ago as though they had been aboard the German boat that night; for he had gifts of anecdote and verbal portraiture, and in their unpremeditated cups Toye drew him out about the bush until the shadows passed for minutes from the red-brick face with the white-brick forehead.

"I remember thinking I would dig for gold," said Cazalet. "That's all I knew about Australia; that and bushrangers and dust-storms and bush-fires! But you can have adventures of sorts if you go far enough up-country for 'em; it still pays you to know how to use your fists out there. I didn't, but I was picking it up before I'd been out three months, and in six I was as ready as anybody to take off my coat. I remember once at a bush shanty they dished up such fruity chops that I said I'd fight the cook if they'd send him up; and I'm blowed if it wasn't a fellow I'd been at school with and worshiped as no end of a swell at games! Potts his name was, old Venus Potts, the best looking chap in the school among other things; and there he was, cooking carrion at twenty-five bob a week! Instead of fighting we joined forces, got a burr-cutting job on a good station, then a better one over shearing, and after that I wormed my way in as bookkeeper, and my pal became one of the head overseers. Now we're our own bosses with a share in the show, and the owner comes up only once a year to see how things are looking."

"I hope he had a daughter," said Toye, "and that you're going to marry her, if you haven't yet?"

Cazalet laughed, but the shadow had returned. "No. I left that to my pal," he said. "He did that all right!"

"Then I advise you to go and do likewise," rejoined his new friend with a geniality impossible to take amiss. "I shouldn't wonder, now, if there's some girl you left behind you."

Cazalet shook his head. "None who would look on herself in that light," he interrupted. It was all he said, but once more Toye was regarding him as shrewdly as when the night was younger, and the littleness of the world had not yet made them confidant and boon companion.

Eight bells actually struck before their great talk ended and Cazalet swore that he missed the "watches aft, sir!" of the sailing-vessel ten years before; and recalled how they had never changed watch without putting the ship about, his last time in the bay.

"Say!" exclaimed Hilton Toye, knitting his brows over some nebulous recollection of his own. "I seem to have heard of you and some of your yarns before. Didn't you spend nights in a log-hut miles and miles from any other human being?"

It was as they were turning in at last, but the question spoiled a yawn for Cazalet.

"Sometimes, at one of our out-stations," said he, looking puzzled.

"I've seen your photograph," said Toye, regarding him with a more critical stare. "But it was with a beard."

"I had it off when I was ashore the other day," said Cazalet. "I always meant to, before the end of the voyage."

"I see. It was a Miss Macnair showed me that photograph – Miss Blanche Macnair lives in a little house down there near your old home. I judge hers is another old home that's been broken up since your day."

"They've all got married," said Cazalet.

"Except Miss Blanche. You write to her some, Mr. Cazalet?"

"Once a year – regularly. It was a promise. We were kids together," he explained, as he climbed back into the upper berth.

"Guess you were a lucky kid," said the voice below. "She's one in a thousand, Miss Blanche Macnair!"