The Young Step-Mother; Or, A Chronicle of Mistakes 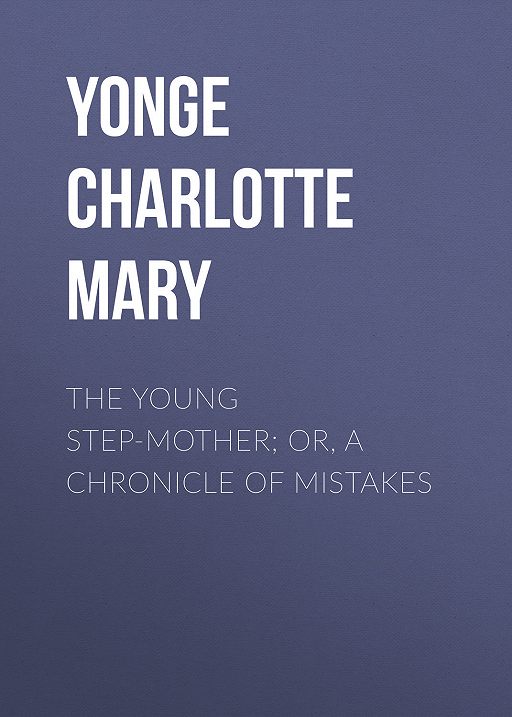 Charlotte M. Yonge
The Young Step-Mother; Or, A Chronicle of Mistakes

‘Have you talked it over with her?’ said Mr. Ferrars, as his little slender wife met him under the beeches that made an avenue of the lane leading to Fairmead vicarage.

‘Yes!’ was the answer, which the vicar was not slow to understand.

‘I cannot say I expected much from your conversation, and perhaps we ought not to wish it. We are likely to see with selfish eyes, for what shall we do without her?’

‘Dear Albinia! You always taunted me with having married your sister as much as yourself.’

‘So I shall again, if you cannot give her up with a good grace.’

‘If I could have had my own way in disposing of her.’

‘Perhaps the hero of your own composition might be less satisfactory to her than is Kendal.’

‘At least he should be minus the children!’

‘I fancy the children are one great attraction. Do you know how many there are?’

‘Three; but if Albinia knows their ages she involves them in a discreet haze. I imagine some are in their teens.’

‘Impossible, Winifred, he is hardly five-and-thirty.’

‘Thirty-eight, he said yesterday, and he married very early. I asked Albinia if her son would be in tail-coats; but she thought I was laughing at her, and would not say. She is quite eager at the notion of being governess to the girls.’

‘She has wanted scope for her energies,’ said Mr. Ferrars. ‘Even spoiling her nephew, and being my curate, have not afforded field enough for her spirit of usefulness.’

‘That is what I am afraid of.’

‘That it is my fault. Before our marriage, you and she were the whole world to each other; but since I came, I have seen, as you say, that the craving for work was strong, and I fear it actuates her more than she knows.’

‘No such thing. It is a case of good hearty love. What, are you afraid of that, too?’

‘Yes, I am. I grudge her giving her fresh whole young heart away to a man who has no return to make. His heart is in his first wife’s grave. Yes, you may smile, Maurice, as if I were talking romance; but only look at him, poor man! Did you ever see any one so utterly broken down? She can hardly beguile a smile from him.’

‘His melancholy is one of his charms in her eyes.’

‘So it may be, as a sort of interesting romance. I am sure I pity the poor man heartily, but to see her at three-and-twenty, with her sweet face and high spirits, give herself away to a man who looks but half alive, and cannot, if he would, return that full first love—have the charge of a tribe of children, be spied and commented on by the first wife’s relations—Maurice, I cannot bear it.’

‘It is not what we should have chosen,’ said her husband, ‘but it has a bright side. Kendal is a most right-minded, superior man, and she appreciates him thoroughly. She has great energy and cheerfulness, and if she can comfort him, and rouse him into activity, and be the kind mother she will be to his poor children, I do not think we ought to grudge her from our own home.’

‘You and she have so strong a feeling for motherless children!’

‘Thinking of Kendal as I do, I have but one fear for her.’

‘I have many—the chief being the grandmother.’

‘Mine will make you angry, but it is my only one. You, who have only known her since she has subdued it, have probably never guessed that she has that sort of quick sensitive temper—’

‘Maurice, Maurice! as if I had not been a most provoking, presuming sister-in-law. As if I had not acted so that if Albinia ever had a temper, she must have shown it.’

‘I knew you would not believe me, and I really am not afraid of her doing any harm by it, if that is what you suspect me of. No, indeed; but I fear it may make her feel any trials of her position more acutely than a placid person would.’

‘Oho! so you own there will be trials!’

‘My dear Winifred, as if I had not sat up till twelve last night laying them before Albinia. How sick the poor child must be of our arguments, when there is no real objection, and she is so much attached! Have you heard anything about these connexions of his? Did you not write to Mrs. Nugent? I wish she were at home.’

‘I had her answer by this afternoon’s post, but there is nothing to tell. Mr. Kendal has only been settled at Bayford Bridge a few years, and she never visited any one there, though Mr. Nugent had met Mr. Kendal several times before his wife’s death, and liked him. Emily is charmed to have Albinia for a neighbour.’

‘Does she know nothing of the Meadows’ family?’

‘Nothing but that old Mrs. Meadows lives in the town with one unmarried daughter. She speaks highly of the clergyman.’

‘John Dusautoy? Ay, he is admirable—not that I have done more than see him at visitations when he was curate at Lauriston.’

‘I fancy he is, but I am not sure. There is one good friend for Albinia any way!’

‘And now for your investigations. Did you see Colonel Bury?’

‘I did, but he could say little more than we knew. He says nothing could be more exemplary than Kendal’s whole conduct in India, he only regretted that he kept so much aloof from others, that his principle and gentlemanly feeling did not tell as much as could have been wished. He has always been wrapped up in his own pursuits—a perfect dictionary of information.’

‘We had found out that, though he is so silent. I should think him a most elegant scholar.’

‘And a deep one. He has studied and polished his acquirements to the utmost. I assure you, Winifred, I mean to be proud of my brother-in-law.’

‘What did you hear of the first wife?’

‘It was an early marriage. He went home as soon as he had sufficient salary, married her, and brought her out. She was a brilliant dark beauty, who became quickly a motherly, housewifely, common-place person—I should think there had been a poet’s love, never awakened from.’

‘The very thing that has always struck me when, poor man, he has tried to be civil to me. Here is a man, sensible himself, but who has never had the hap to live with sensible women.’

‘When their children grew too old for India, she came into some little property at Bayford Bridge, which enabled him to retire. Colonel Bury came home in the same ship, and saw much of them, liked him better and better, and seems to have been rather wearied by her. A very good woman, he says, and Kendal most fondly attached; but as to comparing her with Miss Ferrars, he could not think of it for a moment. So they settled at Bayford, and there, about two years ago, came this terrible visitation of typhus fever.’

‘I remember how Colonel Bury used to come and sigh over his friend’s illness and trouble.’

‘He could not help going over it again. The children all fell ill together—the two eldest were twin boys, one puny, the other a very fine fellow, and his father’s especial pride and delight. As so often happens, the sickly one was spared, the healthy one was taken.’

‘Then Albinia will have an invalid on her hands!’

‘The Colonel says this Edmund was a particularly promising boy, and poor Kendal felt the loss dreadfully. He sickened after that, and his wife was worn out with nursing and grief, and sank under the fever at once. Poor Kendal has never held up his head since; he had a terrible relapse.’

‘And,’ said Winifred, ‘he no sooner recovers than he goes and marries our Albinia!’

‘Pray explain to me, Maurice, why, when people become widowed in any unusually lamentable way, they always are the first to marry again.’

‘Incorrigible. I meant to make you pity him.’

‘I did, till I found I had wasted my pity. Why could not these Meadowses look after his children! Why must the Colonel bring him here? I believe it was with malice prepense!’

‘The Colonel went to see after him, and found him so drooping and wretched, that he insisted on bringing him home with him, and old Mrs. Meadows and her daughter almost forced him to accept the invitation.’

‘They little guessed what the Colonel would be at!’

‘You will be better now you have the Colonel to abuse,’ said her husband.

‘And pray what do you mean to say to the General?’

‘Exactly what I think.’

‘And to the aunts?’ slyly asked the wife.

‘I think I shall leave you all that correspondence. It will be too edifying to see you making common cause with the aunts.’

‘That comes of trying to threaten one’s husband; and here they come,’ said Winifred. ‘Well, Maurice, what can’t be cured must be endured. Albinia’a heart is gone, he is a very good man, and spite of India, first wife, and melancholy, he does not look amiss!’

Mr. Ferrars smiled at the chary, grudging commendation of the tall, handsome man who advanced through the beech-wood, but it was too true that his clear olive complexion had not the line of health, that there was a world of oppression on his broad brow and deep hazel eyes, and that it was a dim, dreamy, reluctant smile that was awakened by the voice of the lady who walked by his side, as if reverencing his grave mood.

She was rather tall, very graceful, and well made, but her features were less handsome than sweet, bright, and sensible. Her hair was nut-brown, in long curled waves; her eyes, deep soft grey, and though downcast under the new sympathies, new feelings, and responsibilities that crowded on her, the smile and sparkle that lighted them as she blushed and nodded to her brother and sister, showed that liveliness was the natural expression of that engaging face.

Say what they would, it was evident that Albinia Ferrars had cast in her lot with Edmund Kendal, and that her energetic spirit and love of children animated her to embrace joyfully the cares which such a choice must impose on her.

As might have been perceived by one glance at the figure, step, and bearing of Mr. Ferrars, perfectly clerical though they were, he belonged to a military family. His father had been a distinguished Peninsular officer, and his brother, older by many years, held a command in Canada. Maurice and Albinia, early left orphans, had, with a young cousin, been chiefly under the charge of their aunts, Mrs. Annesley and Miss Ferrars, and had found a kind home in their house in Mayfair, until Maurice had been ordained to the family living of Fairmead, and his sister had gone to live with him there, extorting the consent of her elder brother to her spending a more real and active life than her aunts’ round of society could offer her.

The aunts lamented, but they could seldom win their darling to them for more than a few weeks at a time, even after their nephew Maurice had—as they considered—thrown himself away on a little lively lady of Irish parentage, no equal in birth or fortune, in their opinion, for the grandson of Lord Belraven.

They had been very friendly to the young wife, but their hopes had all the more been fixed on Albinia; and even Winifred could afford them some generous pity in the engagement of their favourite niece to a retired East India Company’s servant—a widower with three children.