The Ledge on Bald Face 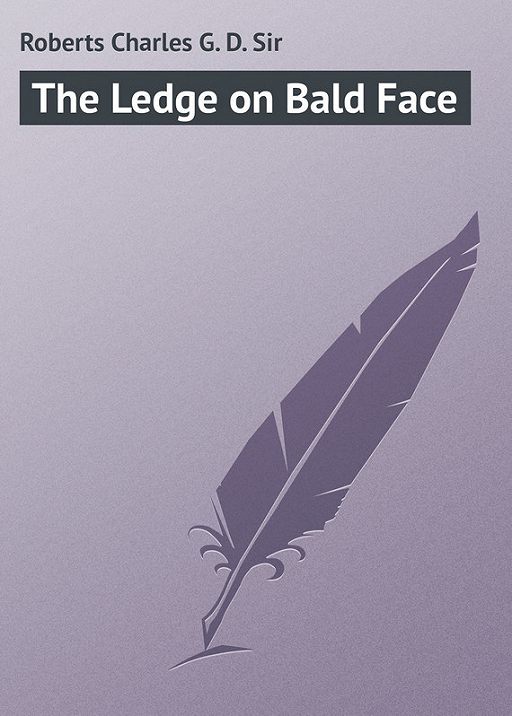 I
THE LEDGE ON BALD FACE

The Ledge on Bald Face

That one stark naked side of the mountain which gave it its name of Old Bald Face fronted full south. Scorched by sun and scourged by storm throughout the centuries, it was bleached to an ashen pallor that gleamed startlingly across the leagues of sombre, green-purple wilderness outspread below. From the base of the tremendous bald steep stretched off the interminable leagues of cedar swamp, only to be traversed in dry weather or in frost. All the region behind the mountain face was an impenetrable jumble of gorges, pinnacles, and chasms, with black woods clinging in crevice and ravine and struggling up desperately towards the light.

In the time of spring and autumn floods, when the cedar swamps were impenetrable to all save mink, otter, and musk-rat, the only way from the western plateau to the group of lakes that formed the source of the Ottanoonsis, on the east, was by a high, nerve-testing trail across the wind-swept brow of Old Bald Face. The trail followed a curious ledge, sometimes wide enough to have accommodated an ox-wagon, at other times so narrow and so perilous that even the sure-eyed caribou went warily in traversing it.

The only inhabitants of Bald Face were the eagles, three pairs of them, who had their nests, widely separated from each other in haughty isolation, on jutting shoulders and pinnacles accessible to no one without wings. Though the ledge-path at its highest point was far above the nests, and commanded a clear view of one of them, the eagles had learned to know that those who traversed the pass were not troubling themselves about eagles' nests. They had also observed another thing – of interest to them only because their keen eyes and suspicious brains were wont to note and consider everything that came within their purview – and that was that the scanty traffic by the pass had its more or less regular times and seasons. In seasons of drought or hard frost it vanished altogether. In seasons of flood it increased the longer the floods lasted. And whenever there was any passing at all, the movement was from east to west in the morning, from west to east in the afternoon. This fact may have been due to some sort of dimly recognized convention among the wild kindreds, arrived at in some subtle way to avoid unnecessary – and necessarily deadly – misunderstanding and struggle. For the creatures of the wild seldom fight for fighting's sake. They fight for food, or, in the mating season, they fight in order that the best and strongest may carry off the prizes. But mere purposeless risk and slaughter they instinctively strive to avoid. The airy ledge across Bald Face was not a place where the boldest of the wild kindred – the bear or the bull-moose, to say nothing of lesser champions – would wilfully invite the doubtful combat. If, therefore, it had been somehow arrived at that there should be no disastrous meetings, no face-to-face struggles for the right of way, at a spot where dreadful death was inevitable for one or both of the combatants, that would have been in no way inconsistent with the accepted laws and customs of the wilderness. On the other hand, it is possible that this alternate easterly and westerly drift of the wild creatures – a scanty affair enough at best of times – across the front of Bald Face was determined in the first place, on clear days, by their desire not to have the sun in their eyes in making the difficult passage, and afterwards hardened into custom. It was certainly better to have the sun behind one in treading the knife-edge pass above the eagles. Joe Peddler found it troublesome enough, that strong, searching glare from the unclouded sun of early morning full in his eyes, as he worked over toward the Ottanoonsis lakes. He had never attempted the crossing of Old Bald Face before, and he had always regarded with some scorn the stories told by Indians of the perils of that passage. But already, though he had accomplished but a small portion of his journey and was still far from the worst of the pass, he had been forced to the conclusion that report had not exaggerated the difficulties of his venture. However, he was steady of head and sure of foot, and the higher he went in that exquisitely clear, crisp air, the more pleased he felt with himself. His great lungs drank deep of the tonic wind which surged against him rhythmically, and seemed to him to come unbroken from the outermost edges of the world. His eyes widened and filled themselves, even as his lungs, with the ample panorama that unfolded before them. He imagined – for the woodsman, dwelling so much alone, is apt to indulge some strange imaginings – that he could feel his very spirit enlarging, as if to take full measure of these splendid breadths of sunlit, wind-washed space.

Presently, with a pleasant thrill, he observed that just ahead of him the ledge went round an abrupt shoulder of the rockface at a point where there was a practically sheer drop of many hundreds of feet into what appeared a feather-soft carpet of treetops. He looked shrewdly to the security of his footing as he approached, and also to the roughnesses of the rock above the ledge, in case a sudden violent gust should chance to assail him just at the turn. He felt that at such a spot it would be so easy – indeed, quite natural – to be whisked off by the sportive wind, whirled out into space, and dropped into that green carpet so far below. In his flexible oil-tanned "larrigans" of thick cow-hide, Peddler moved noiselessly as a wild-cat, even over the bare stone of the ledge. He was like a grey shadow drifting slowly across the bleached face of the precipice. As he drew near the bend of the trail, of which not more than eight or ten paces were now visible to him, he felt every nerve grow tense with exhilarating expectation. Yet, even so, what happened was the utterly unexpected.

Around the bend before him, stepping daintily on her fine hooves, came a young doe. She completely blocked the trail just on that dizzy edge.

Peddler stopped short, tried to squeeze himself to the rock like a limpet, and clutched with fingers of iron at a tiny projection.

The doe, for one second, seemed petrified with amazement. It was contrary to all tradition that she should be confronted on that trail. Then, her amazement instantly dissolving into sheer madness of panic, she wheeled about violently to flee. But there was no room for even her lithe body to make the turn. The inexorable rock-face bounced her off, and with an agonized bleat, legs sprawling and great eyes starting from their sockets, she went sailing down into the abyss.

With a heart thumping in sympathy, Peddler leaned outward and followed that dreadful flight, till she reached that treacherously soft-looking carpet of treetops and was engulfed by it. A muffled crash came up to Peddler's ears.

"Poor leetle beggar!" he muttered. "I wish't I hadn't scared her so. But I'd a sight rather it was her than me!"

Peddler's exhilaration was now considerably damped. He crept cautiously to the dizzy turn of the ledge and peered around. The thought upon which his brain dwelt with unpleasant insistence was that if it had been a surly old bull-moose or a bear which had confronted him so unexpectedly, instead of that nervous little doe, he might now be lying beneath that deceitful green carpet in a state of dilapidation which he did not care to contemplate.

Beyond the turn the trail was clear to his view for perhaps a couple of hundred yards. It climbed steeply through a deep re-entrant, a mighty perpendicular corrugation of the rock-face, and then disappeared again around another jutting bastion. He hurried on rather feverishly, not liking that second interruption to his view, and regretting, for the first time, that he had no weapon with him but his long hunting-knife. He had left his rifle behind him as a useless burden to his climbing. No game was now in season, no skins in condition to be worth the shooting, and he had food enough for the journey in his light pack. He had not contemplated the possibility of any beast, even bear or bull-moose, daring to face him, because he knew that, except in mating-time, the boldest of them would give a man wide berth. But, as he now reflected, here on this narrow ledge even a buck or a lynx would become dangerous, finding itself suddenly at bay.

The steepness of the rise in the trail at this point almost drove Peddler to helping himself with his hands. As he neared the next turn, he was surprised to note, far out to his right, a soaring eagle, perhaps a hundred feet below him. He was surprised, too, by the fact that the eagle was paying no attention to him whatever, in spite of his invasion of the great bird's aerial domain. Instinctively he inferred that the eagle's nest must be in some quite inaccessible spot at safe distance from the ledge. He paused to observe from above, and thus fairly near at hand, the slow flapping of those wide wings, as they employed the wind to serve the majesty of their flight. While he was studying this, another deduction from the bird's indifference to his presence flashed upon his mind. There must be a fairly abundant traffic of the wild creatures across this pass, or the eagle would not be so indifferent to his presence. At this thought he lost his interest in problems of flight, and hurried forward again, anxious to see what might be beyond the next turn of the trail.

His curiosity was gratified all too abruptly for his satisfaction. He reached the turn, craned his head around it, and came face to face with an immense black bear.

The bear was not a dozen feet away. At sight of Peddler's gaunt dark face and sharp blue eyes appearing thus abruptly and without visible support around the rock, he shrank back upon his haunches with a startled "Woof!"

As for Peddler, he was equally startled, but he had too much discretion and self-control to show it. Never moving a muscle, and keeping his body out of sight so that his face seemed to be suspended in mid-air, he held the great beast's eyes with a calm, unwinking gaze.

The bear was plainly disconcerted. After a few seconds he glanced back over his shoulder, and seemed to contemplate a strategic movement to the rear. As the ledge at this point was sufficiently wide for him to turn with due care, Peddler expected now to see him do so. But what Peddler did not know was that dim but cogent "law of the ledge," which forbade all those who travelled by it to turn and retrace their steps, or to pass in the wrong direction at the wrong time. He did not know what the bear knew – namely, that if that perturbed beast should turn, he was sure to be met and opposed by other wayfarers, and thus to find himself caught between two fires.