Discipline and Other Sermons 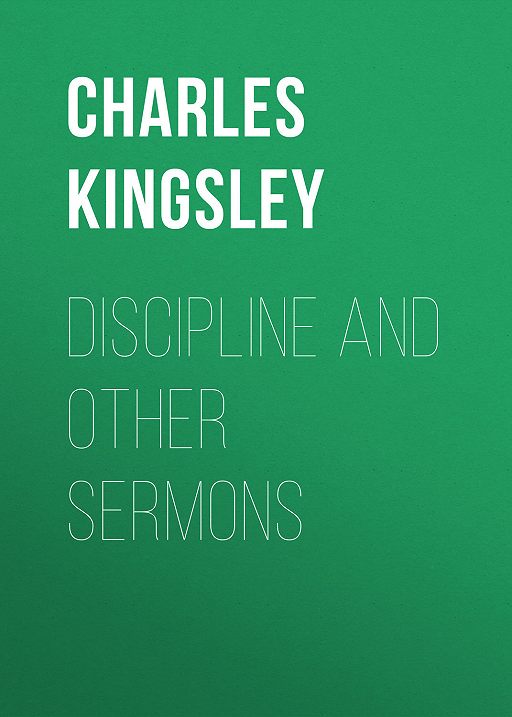 Charles Kingsley
Discipline and Other Sermons


He couched, he lay down as a lion; and as a great lion.
Who dare rouse him up?

These were the words of the Eastern sage, as he looked down from the mountain height upon the camp of Israel, abiding among the groves of the lowland, according to their tribes, in order, discipline, and unity.  Before a people so organized, he saw well, none of the nations round could stand.  Israel would burst through them, with the strength of the wild bull crashing through the forest.  He would couch as a lion, and as a great lion.  Who dare rouse him up?

But such a people, the wise Balaam saw, would not be mere conquerors, like those savage hordes, or plundering armies, which have so often swept over the earth before and since, leaving no trace behind save blood and ashes.  Israel would be not only a conqueror, but a colonist and a civilizer.  And as the sage looked down on that well-ordered camp, he seems to have forgotten for a moment that every man therein was a stern and practised warrior.  ‘How goodly,’ he cries, ‘are thy tents, oh Jacob, and thy camp, oh Israel.’  He likens them, not to the locust swarm, the sea flood, nor the forest fire, but to the most peaceful, and most fruitful sights in nature or in art.  They are spread forth like the water-courses, which carry verdure and fertility as they flow.  They are planted like the hanging gardens beside his own river Euphrates, with their aromatic shrubs and wide-spreading cedars.  Their God-given mission may be stern, but it will be beneficent.  They will be terrible in war; but they will be wealthy, prosperous, civilized and civilizing, in peace.

Many of you must have seen—all may see—that noble picture of Israel in Egypt which now hangs in the Royal Academy; in which the Hebrews, harnessed like beasts of burden, writhing under the whips of their taskmasters, are dragging to its place some huge Egyptian statue.

Compare the degradation portrayed in that picture with this prophecy of Balaam’s, and then consider—What, in less than two generations, had so transformed those wretched slaves?

Compare, too, with Balaam’s prophecy the hints of their moral degradation which Scripture gives;—the helplessness, the hopelessness, the cowardice, the sensuality, which cried, ‘Let us alone, that we may serve the Egyptians.  Because there were no graves in Egypt, hast thou brought us forth to die in the wilderness?’  ‘Whose highest wish on earth was to sit by the fleshpots of Egypt, where they did eat bread to the full.’  What had transformed that race into a lion, whom none dare rouse up?

Plainly, those forty years of freedom.  But of freedom under a stern military education: of freedom chastened by discipline, and organized by law.

I say, of freedom.  No nation of those days, we have reason to believe, enjoyed a freedom comparable to that of the old Jews.  They were, to use our modern phrase, the only constitutional people of the East.  The burdensomeness of Moses’ law, ere it was overlaid, in later days, by Rabbinical scrupulosity, has been much exaggerated.  In its simpler form, in those early times, it left every man free to do, as we are expressly told, that which was right in his own eyes, in many most important matters.  Little seems to have been demanded of the Jews, save those simple ten commandments, which we still hold to be necessary for all civilized society.

And their obedience was, after all, a moral obedience; the obedience of free hearts and wills.  The law could threaten to slay them for wronging each other; but they themselves had to enforce the law against themselves.  They were always physically strong enough to defy it, if they chose.  They did not defy it, because they believed in it, and felt that in obedience and loyalty lay the salvation of themselves and of their race.

It was not, understand me, the mere physical training of these forty years which had thus made them men indeed.  Whatever they may have gained by that—the younger generation at least—of hardihood, endurance, and self-help, was a small matter compared with the moral training which they had gained—a small matter, compared with the habits of obedience, self-restraint, self-sacrifice, mutual trust, and mutual help; the inspiration of a common patriotism, of a common national destiny.  Without that moral discipline, they would have failed each other in need; have broken up, scattered, or perished, or at least remained as settlers or as slaves among the Arab tribes.  With that moral discipline, they held together, and continued one people till the last, till they couched, they lay down as a lion, and as a great lion, and none dare rouse them up.

You who are here to-day—I speak to those in uniform—are the representatives of more than one great body of your countrymen, who have determined to teach themselves something of that lesson which Israel learnt in the wilderness; not indeed by actual danger and actual need, but by preparation for dangers and for needs, which are only too possible as long as there is sin upon this earth.

I believe—I have already seen enough to be sure—that your labour and that of your comrades will not be in vain; that you will be, as you surely may be, the better men for that discipline to which you have subjected yourselves.

You must never forget that there are two sides, a softer and a sterner side, to the character of the good man; that he, the perfect Christ, who is the Lion of Judah, taking vengeance, in every age, on all who wrong their fellow men, is also the Lamb of God, who shed his own blood for those who rebelled against him.  You must recollect that there are virtues—graces we call them rather—which you may learn elsewhere better than in the camp or on the drilling ground; graces of character more devout, more pure, more tender, more humane, yet necessary for the perfect man, which you will learn rather in your own homes, from the innocence of your own children, from the counsels and examples of your mothers and your wives.

But there are virtues—graces we must call them too—just as necessary for the perfect man, which your present training ought to foster as (for most of you) no other training can; virtues which the old monk tried to teach by the stern education of the cloister; which are still taught, thank God, by the stern education of our public schools; which you and your comrades may learn by the best of all methods, by teaching them to yourselves.

For here, and wherever military training goes on, must be kept in check those sins of self-will, conceit, self-indulgence, which beset all free and prosperous men.  Here must be practised virtues which (if not the very highest) are yet virtues still, and will be such to all eternity.

For the moral discipline which goes to make a good soldier or a successful competitor on this ground,—the self-restraint, the obedience, the diligence, the punctuality, the patience, the courtesy, the forbearance, the justice, the temperance,—these virtues, needful for those who compete in a struggle in which the idler and the debauchee can take no share, all these go equally toward the making of a good man.

The germs of these virtues you must bring hither with you.  And none can give them to you save the Spirit of God, the giver of all good.  But here you may have them, I trust, quickened into more active life, strengthened into more settled habits, to stand you in good stead in all places, all circumstances, all callings; whether you shall go to serve your country and your family, in trade or agriculture, at home; or whether you shall go forth, as many of you will, as soldiers, colonists, or merchants, to carry English speech and English civilization to the ends of all the earth.

For then, if you learn to endure hardness—in plain English, to exercise obedience and self-restraint—will you be (whether regulars or civilians) alike the soldiers of Christ, able and willing to fight in that war of which He is the Supreme Commander, and which will endure as long as there is darkness and misery upon the earth; even the battle of the living God against the baser instincts of our nature, against ignorance and folly, against lawlessness and tyranny, against brutality and sloth.  Those, the deadly enemies of the human race, you are all bound to attack, if you be good men and true, wheresoever you shall meet them invading the kingdom of your Saviour and your God.  But you can only conquer them in others in proportion as you have conquered them in yourselves.

May God give you grace to conquer them in yourselves more and more; to profit by the discipline which you may gain by this movement; and bequeath it, as a precious heirloom, to your children hereafter!

For so, whether at home or abroad, will you help to give your nation that moral strength, without which physical strength is mere violent weakness; and by the example and influence of your own discipline, obedience, and self-restraint, help to fulfil of your own nation the prophecy of the Seer—

‘He couched, he lay down as a lion; and as a great lion.  Who dare rouse him up?’

SERMON II
THE TEMPLE OF WISDOM

Wisdom hath builded her house, she hath hewn out her seven pillars: she hath killed her beasts; she hath mingled her wine; she hath also furnished her table.  She hath sent forth her maidens; she crieth upon the highest places of the city, Whoso is simple, let him turn in hither: and to him that wanteth understanding, she saith to him, Come, eat of my bread, and drink of the wine which I have mingled.

This allegory has been a favourite one with many deep and lofty thinkers.  They mixed it, now and then, with Greek fancies; and brought Phœbus, Apollo, and the Muses into the Temple of Wisdom.  But whatever they added to the allegory, they always preserved the allegory itself.  No words, they felt, could so well express what Wisdom was, and how it was to be obtained by man.