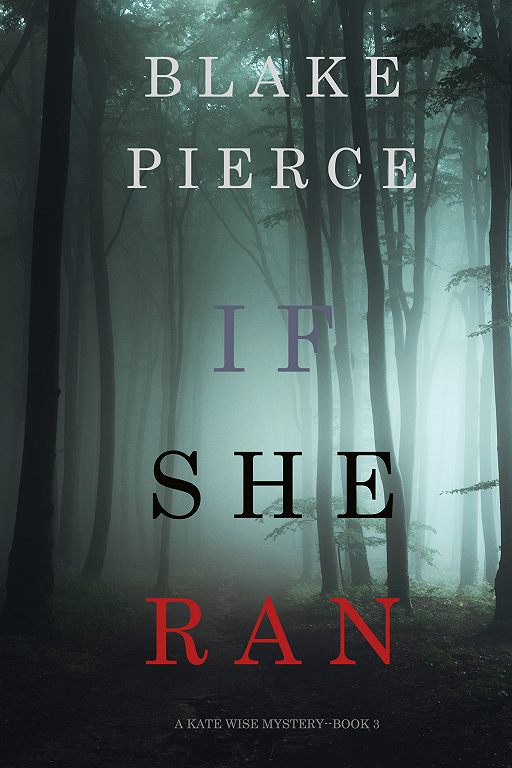 Blake Pierce
If She Ran. A Kate Wise Mystery—Book 3

An avid reader and lifelong fan of the mystery and thriller genres, Blake loves to hear from you, so please feel free to visit www.blakepierceauthor.com to learn more and stay in touch.

Copyright © 2018 by Blake Pierce. All rights reserved. Except as permitted under the U.S. Copyright Act of 1976, no part of this publication may be reproduced, distributed or transmitted in any form or by any means, or stored in a database or retrieval system, without the prior permission of the author. This ebook is licensed for your personal enjoyment only. This ebook may not be re-sold or given away to other people. If you would like to share this book with another person, please purchase an additional copy for each recipient. If you’re reading this book and did not purchase it, or it was not purchased for your use only, then please return it and purchase your own copy. Thank you for respecting the hard work of this author. This is a work of fiction. Names, characters, businesses, organizations, places, events, and incidents either are the product of the author’s imagination or are used fictionally. Any resemblance to actual persons, living or dead, is entirely coincidental. Jacket image Copyright Tom Tom, used under license from Shutterstock.com.

THE MAKING OF RILEY PAIGE SERIES

Her nerves were on fire and she felt like she might get sick at any moment. The boxing gloves on her hands felt foreign and the head gear was suffocating. Neither of these things were new to Kate Wise—she had been training for about two months now, but this was her first time sparring with an actual partner. While she was aware that it was all in good fun and just part of the workout regimen, it was still making her nervous. She’d be throwing actual punches at someone’s body and that was not something she had ever taken lightly.

She looked across the ring at her sparring partner, a younger woman whom she was trying her best not to view as an opponent. She was another member of the small gym who had been undergoing the boxing program. The woman’s name was Margo Dunn and she was taking the course for the same reason as Kate; it was a great full body exercise that, at its core, didn’t involve too much running or weightlifting.

Margo grinned at Kate as her trainer slipped in her mouth guard. Kate nodded back in response as her trainer slid hers in as well. When it fell in perfectly around her teeth, Kate felt as if a switch had been flipped. She was in boxing mode now. Yes, the nerves were still there and she was uneasy with the whole situation, but it was time to go. It was time to work. There was only an audience of seven—made up of trainers and two other gym members who were just curious.

By the side of the ring, someone rang the little bell to signify the start of the fight. Kate walked out to the middle of the ring, where she met with Margo. They tapped gloves and took two respectful steps back.

And then it was on. Kate circled a bit, finding the rhythm with her feet she had been taught to remember as if she were dancing. She stepped forward and threw her first jab. Margo blocked it easily, but it was good to just get warmed up. Kate jabbed again, a little rabbit punch with her left hand. Margo blocked this one and then countered with a left that caught Kate right along the side of the head. The punch was soft by design—this was, after all, just a sparring match—and fell right along the cushion of the head gear. But still, it was enough to rock Kate a bit.

You’re fifty-six, she thought to herself. What the hell were you thinking?

She considered the question as Margo threw a right-handed hook. Kate sidestepped it. Dodging it so easily gave her more confidence. When she also managed to effortlessly block the jab Margo followed with, it stirred up the need to excel.

You know why you’re doing this, she thought. Nine weeks in and you’ve lost eighteen pounds and have the best muscle tone you’ve had in your life. You feel about twenty years younger and let’s be real…have you ever felt this strong?

No, she hadn’t. And while she was nowhere near mastering the art of boxing, she knew that she had the basic skills down.

With this mentality locked in place, she stepped forward in a near-strafing position, faked a left jab, and then delivered a right hook. When the hook landed right along Margo’s chin, Kate sent out the left jab…and then another. Both landed true, rocking Margo a bit. A light of surprise shone in her eyes as she staggered back against the ropes. She grinned, though. Like Kate, she knew this was more or less just practice and she had just learned a lesson: be on the lookout for hard fakes at all times.

Margo responded with two jabs to the body, one that connected with Kate’s ribs. The wind went rushing out of her for a moment and by the time she had caught it again, she saw the heavy right hook coming from her left. She tried moving but hadn’t caught it in time. It slammed into the side of her padded head and shook her backward.

She was dizzy for a moment. Her vision blurred and her knees felt a little weak. She thought about falling, just to catch a break.

But then the counter to that was: You know any other women over fifty who could take this punch and remain standing?

Kate responded with two jabs and then a blow to the body. Only one of the jabs landed but the body blow struck its target. Margo went back into the ropes, staggering a bit. She then came back off of the ropes and threw an impatient uppercut. It was not designed to land. It was just meant to cause Kate to bring her arms up to block it so Margo could then deliver jabs to her exposed core. But Kate saw the slight hesitation in the delivery, knowing the purpose behind it. Instead of blocking the punch, she stepped hard to the right, waited for the full delivery to swing through, and then threw a hard right-handed jab that connected with the side of Margo’s head.

Margo went down right away. She fell on her stomach and rolled over quickly. She slid back to her corner and popped out her mouth guard. She smiled at Kate and shook her head in disbelief.

“I’m sorry,” Kate said, kneeling down in front of Margo.

“Don’t be,” Margo said. “It honestly makes no sense how you manage to be that fast. I feel like I need to apologize. Because of your age, I assumed you’d be…slower.”

Kate’s trainer—a grizzled sixty-something man with a long white beard—climbed between the ropes, chuckling. “I made that same mistake,” he said. “Had a black eye for about a week because of it. Caught the exact same punch that just knocked you down.”

“Don’t feel so apologetic,” Kate said. “That one to my head was huge. It almost got me.”

“It should have gotten you,” the trainer said. “Honestly, it was a little harder than I like to see in these simple sparring matches.” He then looked to Margo. “Up to you. You want to keep going?”

Margo nodded and pulled herself up. Again, her trainer put her mouthpiece in. Both women returned to their respective corners and waited for the bell.

But it was not the bell that Kate heard. Instead, she heard the ringing of her phone. And it was the assigned ringer she used for all calls that came from the bureau.

She pushed her mouthpiece out of her mouth and held her gloved hands out to her trainer. “Sorry,” she said. “I have to take that.”

Her trainer knew about her part-time job as a special agent. He thought it was hard-ass (his word, not hers) that she refused to entirely retire from such a job. So when he untied her gloves for her, he did so as quickly as possible.

Kate slid between the ropes and ran to her gym bag, which was sitting by the wall. She always kept it out and not in the locker room just in case she got such a call. She grabbed the phone and her heart surged with excitement and despair all at once when she saw Deputy Director Duran’s name on the display.

“This is Agent Wise,” she said.

“I do,” she said, glancing back at the ring with longing. Margo’s trainer was working with her on how to avoid fake-outs. “What can I do for you?”

“I was hoping you could come in on a case. It’s effective immediately, and I’d need you and DeMarco to fly out tonight.”

“I don’t know,” she said. And that was the truth. It was very sudden and she had spoken to Melissa, her daughter, several times in the last few weeks about not being so readily available for the last-minute jobs. She had been spending much more time with Melissa and Michelle, her granddaughter, over the last month or so and they finally had a good thing going—something like a routine. Something like a family.

“I appreciate you thinking of me,” Kate said. “But I don’t know if I can come in for this one. It’s very last minute. And flying out…that makes it seem like it’s pretty far away. I don’t know that I’m prepared for a long trip. Where is it, anyway?”

“New York. Kate…I’m pretty sure it has ties to the Nobilini case.”

The name sent a chill through her. Her head started ringing, and it wasn’t from the blow Margo had delivered moments ago. Flashes of a case from nearly eight years ago cascaded through her head—leering, taunting.

“I’m here,” she said. She then looked back to the ring. Margo was stretching and lightly jogging in place, ready for their next bout.

It was a shame she wouldn’t get it. Because as soon as Kate heard the name, she knew she’d take the case. She had to.

The Nobilini case had gotten away from her eight years ago—one of the true defeats she’d ever had in her career.

This was her chance to close it—to bolt shut the one case that had truly bested her.

“When’s the flight?” she asked Duran.

She thought of Melissa and Michelle, her heart sinking. Melissa wouldn’t understand, but Kate could not turn this opportunity down.