Sybil, Or, The Two Nations 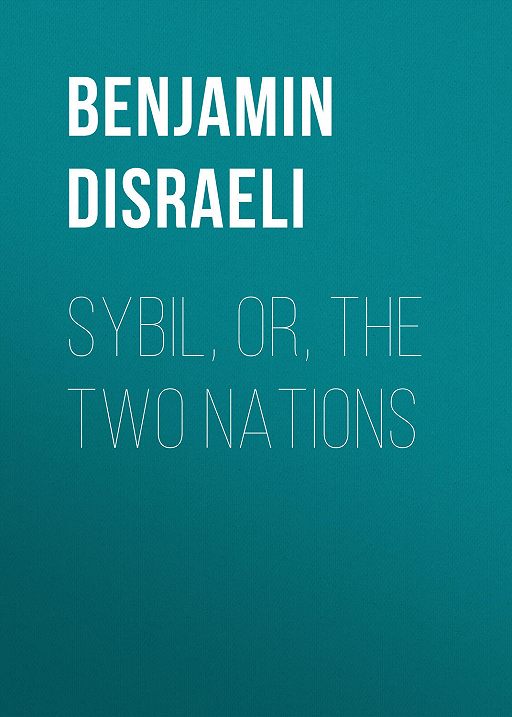 Earl of Beaconsfield Benjamin Disraeli
Sybil, Or, The Two Nations

“I’ll take the odds against Caravan.”

And Lord Milford, a young noble, entered in his book the bet which he had just made with Mr Latour, a grey headed member of the Jockey Club.

It was the eve of the Derby of 1837. In a vast and golden saloon, that in its decorations would have become, and in its splendour would not have disgraced, Versailles in the days of the grand monarch, were assembled many whose hearts beat at the thought of the morrow, and whose brains still laboured to control its fortunes to their advantage.

“They say that Caravan looks puffy,” lisped in a low voice a young man, lounging on the edge of a buhl table that had once belonged to a Mortemart, and dangling a rich cane with affected indifference in order to conceal his anxiety from all, except the person whom he addressed.

“They are taking seven to two against him freely over the way,” was the reply. “I believe it’s all right.”

“Do you know I dreamed last night something about Mango,” continued the gentleman with the cane, and with a look of uneasy superstition.

His companion shook his head.

“Well,” continued the gentleman with the cane, “I have no opinion of him. I gave Charles Egremont the odds against Mango this morning; he goes with us, you know. By the bye, who is our fourth?”

“I thought of Milford,” was the reply in an under tone. “What say you?”

“Milford is going with St James and Punch Hughes.”

“Well, let us come into supper, and we shall see some fellow we like.”

So saying, the companions, taking their course through more than one chamber, entered an apartment of less dimensions than the principal saloon, but not less sumptuous in its general appearance. The gleaming lustres poured a flood of soft yet brilliant light over a plateau glittering with gold plate, and fragrant with exotics embedded in vases of rare porcelain. The seats on each side of the table were occupied by persons consuming, with a heedless air, delicacies for which they had no appetite; while the conversation in general consisted of flying phrases referring to the impending event of the great day that had already dawned.

“Come from Lady St Julian’s, Fitz?” said a youth of very tender years, and whose fair visage was as downy and as blooming as the peach from which with a languid air he withdrew his lips to make this inquiry of the gentleman with the cane.

“Yes; why were not you there?”

“I never go anywhere,” replied the melancholy Cupid, “everything bores me so.”

“Well, will you go to Epsom with us to-morrow, Alfred?” said Lord Fitzheron. “I take Berners and Charles Egremont, and with you our party will be perfect.”

“I feel so cursed blase!” exclaimed the boy in a tone of elegant anguish.

“It will give you a fillip, Alfred,” said Mr Berners; “do you all the good in the world.”

“Nothing can do me good,” said Alfred, throwing away his almost untasted peach, “I should be quite content if anything could do me harm. Waiter, bring me a tumbler of Badminton.”

“And bring me one too,” sighed out Lord Eugene De Vere, who was a year older than Alfred Mountchesney, his companion and brother in listlessness. Both had exhausted life in their teens, and all that remained for them was to mourn, amid the ruins of their reminiscences, over the extinction of excitement.

“Well, Eugene, suppose you come with us.” said Lord Fitzheron.

“I think I shall go down to Hampton Court and play tennis,” said Lord Eugene. “As it is the Derby, nobody will be there.”

“And I will go with you, Eugene,” said Alfred Mountchesney, “and we will dine together afterwards at the Toy. Anything is better than dining in this infernal London.”

“Well, for my part,” said Mr Berners. “I do not like your suburban dinners. You always get something you can’t eat, and cursed bad wine.”

“I rather like bad wine,” said Mr Mountchesney; “one gets so bored with good wine.”

“Do you want the odds against Hybiscus, Berners?” said a guardsman looking up from his book, which he had been very intently studying.

“All I want is some supper, and as you are not using your place—”

“You shall have it. Oh! here’s Milford, he will give them me.”

And at this moment entered the room the young nobleman whom we have before mentioned, accompanied by an individual who was approaching perhaps the termination of his fifth lustre but whose general air rather betokened even a less experienced time of life. Tall, with a well-proportioned figure and a graceful carriage, his countenance touched with a sensibility that at once engages the affections. Charles Egremont was not only admired by that sex, whose approval generally secures men enemies among their fellows, but was at the same time the favourite of his own.

“I saw you waltzing with the little Bertie, old fellow,” said Lord Fitzheron, “and therefore did not stay to speak to you, as I thought we should meet here. I am to call for you, mind.”

“How shall we all feel this time to-morrow?” said Egremont, smiling.

“The happiest fellow at this moment must be Cockie Graves,” said Lord Milford. “He can have no suspense. I have been looking over his book, and I defy him, whatever happens, not to lose.”

“Poor Cockie.” said Mr Berners; “he has asked me to dine with him at the Clarendon on Saturday.”

“Cockie is a very good Cockie,” said Lord Milford, “and Caravan is a very good horse; and if any gentleman sportsman present wishes to give seven to two, I will take him to any amount.”

“My book is made up,” said Egremont; “and I stand or fall by Caravan.”

“There is not a horse except Caravan,” said Lord Milford, “fit for a borough stake.”

“You used to be all for Phosphorus, Egremont,” said Lord Eugene de Vere.

“Yes; but fortunately I have got out of that scrape. I owe Phip Dormer a good turn for that. I was the third man who knew he had gone lame.”

“And what are the odds against him now.”

“He won’t run,” said Mr Berners, “John Day told me he had refused to ride him.”

“I believe Cockie Graves might win something if Phosphorus came in first,” said Lord Milford, laughing.

“How close it is to-night!” said Egremont. “Waiter, give me some Seltzer water; and open another window; open them all.”

At this moment an influx of guests intimated that the assembly at Lady St Julian’s was broken up. Many at the table rose and yielded their places, clustering round the chimney-piece, or forming in various groups, and discussing the great question. Several of those who had recently entered were votaries of Rat-trap, the favourite, and quite prepared, from all the information that had reached them, to back their opinions valiantly. The conversation had now become general and animated, or rather there was a medley of voices in which little was distinguished except the names of horses and the amount of odds. In the midst of all this, waiters glided about handing incomprehensible mixtures bearing aristocratic names; mystical combinations of French wines and German waters, flavoured with slices of Portugal fruits, and cooled with lumps of American ice, compositions which immortalized the creative genius of some high patrician name.

“By Jove! that’s a flash,” exclaimed Lord Milford, as a blaze of lightning seemed to suffuse the chamber, and the beaming lustres turned white and ghastly in the glare.

The thunder rolled over the building. There was a dead silence. Was it going to rain? Was it going to pour? Was the storm confined to the metropolis? Would it reach Epsom? A deluge, and the course would be a quagmire, and strength might baffle speed.

Another flash, another explosion, the hissing noise of rain. Lord Milford moved aside, and jealous of the eye of another, read a letter from Chifney, and in a few minutes afterwards offered to take the odds against Pocket Hercules. Mr Latour walked to the window, surveyed the heavens, sighed that there was not time to send his tiger from the door to Epsom, and get information whether the storm had reached the Surrey hills, for to-night’s operations. It was too late. So he took a rusk and a glass of lemonade, and retired to rest with a cool head and a cooler heart.

The storm raged, the incessant flash played as it were round the burnished cornice of the chamber, and threw a lurid hue on the scenes of Watteau and Boucher that sparkled in the medallions over the lofty doors. The thunderbolts seemed to descend in clattering confusion upon the roof. Sometimes there was a moment of dead silence, broken only by the pattering of the rain in the street without, or the pattering of the dice in a chamber at hand. Then horses were backed, bets made, and there were loud and frequent calls for brimming goblets from hurrying waiters, distracted by the lightning and deafened by the peal. It seemed a scene and a supper where the marble guest of Juan might have been expected, and had he arrived, he would have found probably hearts as bold and spirits as reckless as he encountered in Andalusia.