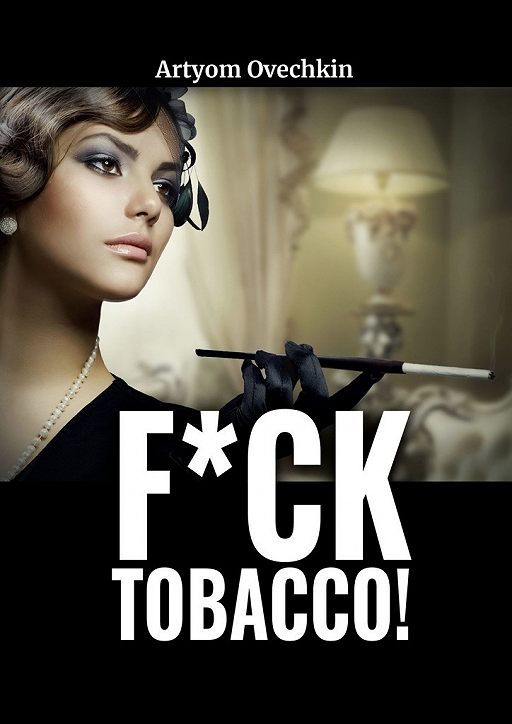 “But how on Earth did you get out of it, Holmes?”

“Elementary, my dear Watson! You smell like a Russian spy.”

Hi!) This book will help smokers quit smoking and provide counselors with a forceful tool to help them. Tell tobacco to fuck off! My name is Artyom Ovechkin. I am a counselor, and I have smoked for twenty years and quit smoking seven years ago. I enjoy my freedom from tobacco! I placed folk humor about smoking and cigarettes (jokes by unknown authors) at the beginning of each section of this book and exciting and useful revelations by former smokers at the end of each chapter. So, relax and get ready to have a good time! Here we go!)

Most smokers prefer not to think about the price they pay for their “habit”. And the price is indecently high. Every cigarette, slowly but steadily, deteriorates the most valuable “property” of a smoker – his health.

The problems have become acute all over the world. Nowadays, it is almost impossible to find a country where people do not smoke tobacco or tobacco products. Tobacco smoking was recognized as a plague of the twentieth- and twenty-first centuries, and not without reason. According to the report of the World Health Organization (WHO) on the Global Tobacco Epidemic 2015, there are about 1.1 billion smokers in the world.

Tobacco consumption is one of the biggest public health threats the world has ever faced, killing more than 7 million people a year across the globe. More than 6 million of those deaths are the result of direct tobacco use, while around 890 thousand are the result of non-smokers that inhaled tobacco smoke. About 80% of smokers worldwide live in low- and middle-income countries, where the burden of tobacco-related illness and death is heaviest.

In low- and middle-income countries, the prevalence of tobacco smoking declines more slowly than in high-income countries, while the popularity of smoking is increasing in low-income countries. The world will suffer 8 million deaths a year by 2030 unless we take action to reduce the number of smokers1.

Consider this: about 5.7 trillion cigarettes were smoked worldwide in 2016.

Russia is among the top ten countries with the highest rates of smoked cigarettes per person – 2.295 cigarettes2.

Studies conducted in the field of smoking prove the severe harm it causes. We will discuss it in detail in the first chapter of this book. Moreover, polling shows that many people either underestimate or do not know about the consequences of this “bad habit”. For example, more than 60% of the population of China is unaware that smoking can cause heart attacks. More than half of adults in India and Indonesia have no idea that smoking can cause strokes3.

Due to the endurance of our body established by nature, it often takes years and even decades for a smoker and his loved ones to realize the negative health effects of smoking. However, there are many other examples when smoking kills much faster. Smoking is not a “bad habit”, as people use to say, but the most popular and widespread type of drug addiction, which affects millions of people around the world.

A smoker enjoys smoking cigarettes because it suppresses symptoms of nicotine withdrawal caused by smoking of a previous cigarette! It’s a vicious circle of smoking. A strong desire to smoke usually occurs after eating, when drinking alcohol, when negative emotions arise, and when working under mental or physical pressure. A cigarette allows a person to get distracted and snap the tension out, to take a break from work, or postpone negative thoughts and emotions for later.

When smoking, the following harmful substances enter our body: carbon monoxide, ammonia, arsenic, hydrocyanic acid, as well as radioactive elements – polonium, lead, bismuth, and other compounds that can cause malignant tumors. Tobacco addiction, or so-called nicotinism, is specified in ICD-10 as a chronic disease. Many people cannot quit smoking on their own and need professional medical and psychological help.

Here I’d like to clarify the critical issue. Why does a person continue to smoke despite all the warnings, social advertising, and realizing the health harm? A person quits smoking, then starts smoking again, and the whole thing is like a vicious circle. The answer is simple: all tobacco products contain nicotine, which is a highly addictive substance.

The dependent position of the smoker affects the way other people perceive him or her. They usually consider a smoker as a weak person with an unhealthy “habit”, who cannot give up the pleasure of smoking even after physicians repeatedly reported about the disastrous consequences, including cancer.

Ironically, smoking is almost the only cause of death in the world, which could be easily eliminated. But according to WHO, about half of smokers die due to using tobacco products.

First, it was hard to quit smoking because I chose the wrong strategy. Each time I denied myself a cigarette, I felt sorry for myself: “Poor me! I’m suffering. It’s so hard, but I have guts, so I’ll put up with it.” Now I realize that I had to think differently: “I was a fool, I ruined my health. Fortunately, I decided to change my life, and now I feel better every day!” When I adopted this mindset, it became much more comfortable to restrain myself from smoking. I decided to quit when I was going through a difficult period in my life, and I was drawn to smoking due to my nervous breakdown. But I decided that it was not worth waiting for better times to come along because we live here and now. If you start waiting for a favorable moment, good mood, vacation, or something like that, then you will never change your life. I don’t smoke, I do sports, and I am happy with myself!

Chapter 1. How smoking affects the health of smokers and others

☺ It’s normal to ask a stranger for a spare cigarette. And if someone is eating a chocolate bar and you ask for a piece, they look at you like you are nuts.

1.1. Do we realize how harmful smoking is to our health?

You’ll probably never find a person who doesn’t know that smoking is harmful, even if he or she doesn’t use to speak to experts and physicians. Nevertheless, not everyone can answer the more important question: what harm is it? Surprisingly, sometimes a piece of expert advice helps quit smoking. People quit and do not smoke for a year or longer. Many people admit that even though this information could be a powerful motivator to quit smoking, no more than half of the smokers had got it.

Hence, the potential effectiveness of informing a person about the specific threats of smoking for his health by any counseling psychologist becomes quite obvious since it increases the probability of successful quitting. For this reason, every counseling psychologist, every person who is about to quit, must know the information presented in this chapter.

I am going to provide a somewhat detailed description of the harmful effects of smoking on human health in this book, and I consider it justified and necessary. Knowledge of the dangers of tobacco is a powerful tool; it should be successfully applied in everyday life and counseling.

Cigarettes cause a lot of physical and emotional pain both to smokers and their relatives. Therefore, sometimes when I look at thousands of people with a smoking cigarette on the streets of my city, and at thousands of people who relatively indifferent look at these smokers, I begin to wonder if the people are in their right mind and aware of what they are doing. I used to be like this for eighteen years. Sometimes I hated myself for not being able to stop smoking, but then I managed to quit smoking for a short while. But then I returned to smoking because I did not have the knowledge that I have now.