LONER IN THE RUSH HOUR CROWD. I AM GOING TO KILL 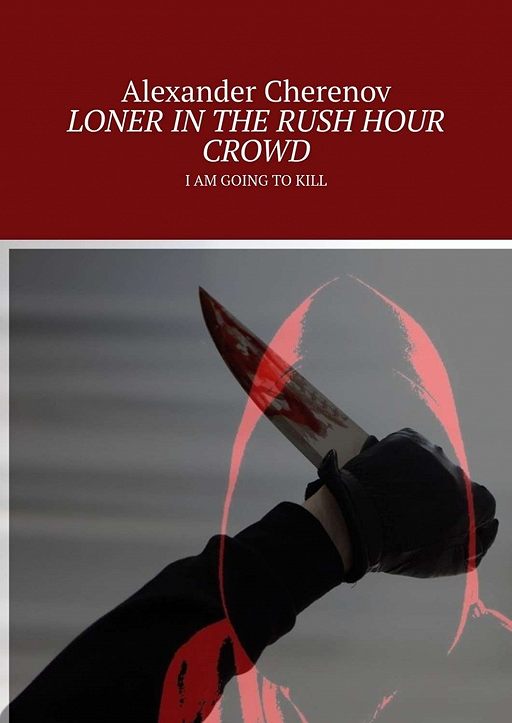 I am going to kill, because I am a fool. If I were not a fool, I would sit at home and drink tea with jam. But I am a fool, and this is so. And so it is not from an excess of self-criticism. And not because there are not enough brains: alas, too much of them. Therefore, I am a fool not hopeless: principled. Having principles: what could be worse?! The order of the «hopeless one» gives, at least, hope on being. A principled fool not only has principles: he also «goes to the principle», going like a war. He climbs onto the wall, he knocks on the locked door. In a word, «causes fire to himself». He begs for trouble – and acquires requested.

All this is me, and all this because I have the wrong look on things. What does life teach us about the right look? That’s right: the right look is when you don’t look and see! In exact accordance with the installation «I see nothing». And, if also «nothing I don’t hear, I don’t know anything, I won’t say anything to anyone», this is a guarantee of longevity, because you will not touch anyone – and nobody will touch you… maybe… if you’re lucky…

But, at least, there is a chance! And the indifferent fool and there is no chance: after all, I am also an indifferent fool! Would be indifferent – would not be a fool. And, if there were – it is harmless, not interfering with anyone, first of all, to myself. As a result: I am doomed to loyalty to the priority of not personal health, but public. And in what form: through damage to the health of individuals, unless, of course, these flawed ones – and without my damage – can be considered personalities. And I am doomed not only to loyalty, but also to the ministry. And this already «obliges and imposes». Some declarations on the principles do not get off. We must prove them – and ourselves – on practice. And it is necessary to practice not on mannequins, but on living carriers of evil. Such, here, trouble happened to me. And it still happens. And all that is needed: pass by! At least, do not cling to personal complaints about the public, even if unwilling to! Alas…

The struggle for the right thing – through «going to work» – is hard work. Is what I do humanely? Well, this is how to look. Here already need a viewing angle. In the generally accepted sense, humanism is a principle of worldview, based on the belief in limitless human capabilities to improve, the requirement of freedom and protection the dignity of the individual, the idea of the human right to happiness and that satisfaction of his needs should be the ultimate goal of society. The text is not mine: from some dictionary. But our thoughts with the disinterested, I hope, the author, are in unison.

So, here: if we approach this principle from the point of view of «the life owners», then humanism is the exclusive right of the latter-day «navels of the earth». They do not accept any restrictions, nor even calls for moderation in the spirit of the attitude towards «rational egoism». «Mine is mine, and yours are mine too!» The case of Clovis lives and wins! Let even common sense and humanity itself prevail.

But there is another point of view: the priority of public interests over personal ones. In my «work» I slipped exactly to it, unintentionally, of course, through carelessness. And did not want: it happened. But, if objectively, outside of my «accident»: it «has the right on equal rights» with rival. Moreover, today the rights of this point are preemptive. Willingly or unwittingly, I myself make them so, giving them an advantage.

Like a sweet dream, I see a reverse perspective! Oh, I would not consider my identity through the prism of society! Not to contact him even through good deeds, because they all have one way out: «sideways and always to the benefactor. Better it will be so: «mine is mine, and yours is yours!» – in the sense of «your problems». And do not ship me a question about the relationship between the individual and society! I agree: even there, abroad, today have already «fed up» with their former priority. Understanding, that the public is above the personal, is now universal. That is, the individual must make room, and if she does not want, then press her. And even oppress. And this is in the mainstream of universal understanding too, even under ritual spells about human rights.

So what I have, to whom and what to refer to. In case if this will be necessary. I am not about the judgment of man, and even not the Last Judgment: the judgment of his soul. So far with this business is the order: we «reached an understanding» with a friend. And if I condemn myself for anything, it is solely for the absence of indifference, saving and beneficial one, elixir of life and peace of mind.

Hence is my point of view on the question: do I, the individual, need to compromise personal for the sake of society? And not only to compromise, but to stand up for the one, who supplies me with some problems? Isn’t it easier to turn on the defensive reflex: «I see nothing, hear nothing, say nothing to anyone»?! And I, as a person, would not associate with society, if not other «personalities». Unfortunately, I am a different person myself. Not average, but social activist in misfortune.

But I did not myself come to life like this: they brought me. Who are they? A strange question: «personality», of course! What exactly? Through their deeds, starting with the slogan «More socialism!» and ending with the slogan «Long live capitalism!»! Only in vain did they expect to find a lamb in me, at least, God’s lamb, at least, for the slaughter.

I say this not without regret, proceeding from the black envy of «trembling creatures», because I myself am one of those who have the «right». «Slaves, who are under the yoke, must honor their masters worthy of all honor» – it’s not about me. «Comrades-gentlemen» made a wrong address – and I made a wrong reaction. Because he explained to them, that «here you are not there». I explained lucidly, so that they not only reach them, but also that they «reach» – with my help immediately «to the point». To the last «point». To the finish line.

The eternal Russian question: «who is to blame?» I will be honest: both, but each in its own way. I am guilty of having responded. They – that provoked the reaction. They privatized my right to a decent life, and I went even further: privatized them themselves. I have privatized their bodies and the lives of these localities – and other comrades will, I hope, take care of their souls and lives there. And, I hope, not from the office of Our Lord.

Of course, I didn’t limit myself to choosing objects of work, and I do not confine myself only to the «mighty of this world» from yesterday’s speculators. Thanks to their activities and the very fact of their existence, I did not stay and for a long time I would not remain without work and clientele, because «the bond of time has broken». New times are incessantly «giving away» a new «product». A vivid example of loyalty to the law of unity and the struggle of opposites: there would be no happiness, but unhappiness would help. You can understand it – and you need – in two ways, including, as happiness for others – and misfortune for me. Unhappiness for a person deprived of indifference. The «product» of the new times is the scope of my efforts. In the spirit of the new time – or, more correctly, of the timelessness, I am a life privatizer. The chosen lives of the «chosen ones». They «chose» themselves – and I «chose» them, because they left me no choice.

Why did this happen and continue to happen? If not ascend to the times, described by Engels in his work «The Origin of the Family, Private Property and the State», I will say this: «I cannot do otherwise». I myself could not: «comrades» helped me – those, who are «gentlemen». Well, they got help of those, who now comply with the slogan «who was nobody – he will become everything!» «in rewind mode»: those, who have become «nobody».

These «nobody» is no less evil, than those, «who have become all». After all, they give live to those, «other». They give to live by one fact of their existence! And not only to live, but also to create, exclusively in the meaning of «messing up», «getting up»! That is, all – on the line of evil. For the very act of the existence of those, who «became all» is evil! Because they live not only at the expense of «giving», but also at my expense! But I was not called a sponsor! So it turns out: «those, who made the return journey», are accomplices of evil and evil themselves. But evil must be fought: we have been bequeathed to this by folk tales. And not only Russians, but all the other nations of the world. So I fight – to the best of strength and capabilities.

I did not immediately come to the choice and «got on the road». For a long time I was «out of stock»: pretended to «smoke out». In strict accordance with the law of natural selection: «do not protrude out of the hole!» «Do not be noticeable – and they will not notice you!» And there, you will leave «your trick» somehow. The main thing is to always be in the right place at the right time, that is, nowhere and never. «I see nothing, hear nothing, know nothing, nothing to anyone I will not say». Ignorance is power, mimicry is a gift! And, if you still have brains, the chances of being increase many times over. It does not matter, that this is the being of a cockroach. «Jedem – das seine!»: «To each one – his own!» «With a strong do not fight, do not sue the rich!» proverb says. She speaks because she tried it on itself.

But I was not going to sue or fight. I was not even going contact anyone. And I didn’t want to go «on the road»: I was pushed out on it. Not life: the manifestations of its new owners! They – manifestations together with the owners – made two mistakes. First: they pushed me, pushed a caring person, who by its nature cannot «honor their masters worthy of all honor»! Second, they «made a mistake with the address», believing, that they had guided me on the right path: the path of «a slave, who was under the yoke». They could not imagine, that «we will go the other way»!