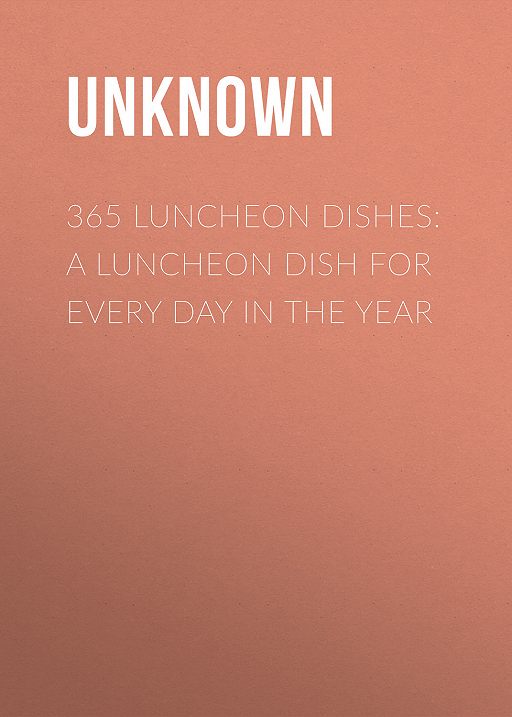 Cut a breast of lamb into small pieces, season, and stew until tender in enough gravy to cover the meat. Thicken the sauce, flavor with a wine-glass of wine, pile in the centre of a platter and garnish with green peas.

Chop and pound ½ a lb. of chicken and 3 ozs. of ham; pass this through a sieve, add 1 oz. of melted butter, 2 well-beaten eggs, and ½ a pint of cream, which must be whipped; season with pepper and salt. Mix all lightly together, put into oiled moulds and steam fifteen minutes, or if in one large mould half an hour.

Have rounds of toast buttered and seasoned with salt and pepper, on each piece place ½ the soft roe of a herring which has been slightly fried and on the top of this a fried mushroom. Serve very hot.

For a very small omelet beat 2 whole eggs and the yokes of two more until a full spoonful can be taken up. Add 3 tablespoonfuls of water, ¼ of a teaspoonful of salt, and a dash of pepper, and when well mixed turn into a hot omelet pan, in which a tablespoonful of butter has been melted, lift the edges up carefully and let the uncooked part run under. When all is cooked garnish with parsley.

Melt 1 oz. of butter, mix with ½ oz. of flour, add ¼ of a pint of milk, stir and cook well. Then beat in the yolks of two eggs, sprinkle in 3 ozs. of grated cheese, add the well-beaten whites of three eggs. Mix in lightly and put in cases. Bake a quarter of an hour.

Slice 3 sweet oranges, after removing the skin and pith, make a dressing with 3 tablespoonfuls of olive oil, a tablespoonful of lemon juice, and a pinch of salt. Serve on lettuce leaves.

Scald one quart of oysters in their own liquor. When boiling take out the oysters and keep them hot. Stir together a tablespoonful of butter and two of flour, and moisten with cold milk. Add two small cups of boiling water to the oyster liquor, season with salt and pepper, and stir in the flour mixture, and let it cook until it thickens like cream. Make a light biscuit dough and cut out with a thimble. Drop these into the boiling mixture, cover the saucepan and cook until the dough is done. Put the oysters on a hot dish and pour biscuit balls and sauce over them.

Chop cold chicken fine; season with onion-juice, celery salt, pepper, and chopped parsley. For 2 cupfuls allow a cupful of cream or rich milk. Heat this (with a bit of soda stirred in) in a saucepan, and thicken with a tablespoonful of butter rubbed in, one of corn-starch, stirred in when the cream is scalding. Cook one minute, put in the seasoned chicken, and cook until smoking hot. Beat two eggs light; take the boiling mixture from the fire and add gradually to these. Pour into a broad dish or agate-iron pan and set in a cold place until perfectly chilled and stiff. Shape with your hands, or with a cutter, into the form of cutlets or chops. Dip in egg, then in cracker-crumbs. Set on the ice an hour or two and fry in deep boiling fat. Send around white sauce with them.—From "The National Cook Book," by Marion Harland and Christine Terhune Herrick.

Put 1 pint of milk over the fire in a double boiler with the grated yellow rind of a lemon and three well-beaten eggs. Stir until the mixture begins to thicken. Remove from the fire; add a cup and a half of sugar, and 1 qt. of cream. Then add a grated cocoanut. Stir until the custard is cold, add the lemon juice and freeze.

Mix together 2 cupfuls of corn-meal, 1 cupful of flour, 1 teaspoonful of salt, and 2 of baking powder. Beat together 3 eggs until thick and light. Add 2½ cupfuls of milk and stir into the dry mixture, adding 2 tablespoonfuls of sugar, and 2 tablespoonfuls of melted butter, and beating well until the batter is smooth. Grease the pans well, or it will stick. Have the batter a little more than 2 inches deep in the pans and bake in a hot oven for about half an hour.—"Table Talk," Phila.

Cut cold roast beef into large slices. Put it into a saucepan with 2 slices of onion, salt and pepper. Pour over it ½ a pt. of boiling water and add 3 tablespoonfuls of soup stock. Stew gently until cooked.

Boil 1 cup of rice rapidly for half an hour, drain in a colander and stand in the oven for a few minutes to dry out the rice. Put 2 tablespoonfuls of butter and a slice of onion into a saucepan. Stir until the onion is a golden brown, add a tablespoonful of flour. (Take out the slice of onion.) Stir until smooth, then add a teaspoonful of curry powder, bring to a boil, add salt. Pour over the rice and serve hot.

One qt. of veal or chicken broth, 1 pt. of cream or milk, 1 onion, a little celery, 1/3 of a cupful of tapioca, 2 cupfuls of cold water, 1 tablespoonful of butter, a small piece of mace, salt and pepper. Wash and soak the tapioca over night. Cook it in the broth for an hour. Cook milk, onion, mace and celery together for 15 minutes, then strain into the tapioca and broth; add the butter, salt and pepper.

Haddock roes are much cheaper than shad roes, and are very nice prepared in this way. Soak for an hour in water and lemon juice, then parboil in salt and water for ten minutes. Fry brown in a little lard and butter mixed. Fry the bacon in a separate pan until brown, remove from the pan and put it in the oven for a few minutes to crisp it. Put the roes in the centre of a hot platter and garnish the bacon around it.

Wash a teacupful of rice in several waters, put it into a saucepan and just cover with cold water, and when it boils, add two cupfuls of milk, and boil until it becomes dry; put it into a mould and press it well. When cold serve with a garnish of preserves around it or with a boiled custard.

Scald 1 pt. of milk and add 1 oz. of butter and let cool; when cool add ¼ of a yeast cake, a teaspoonful of salt and three cups of flour, beat well, cover and let rise about two hours. When light, add sufficient flour to make a soft dough; work lightly and divide into small balls; put each one into a well-greased muffin ring and let rise again. Then bake on a hot griddle. When ready to eat tear them open and butter.

Mince ¾ of a lb. of cold veal and 3 ozs. of ham, wet with 1 tablespoonful of gravy. Season with salt and pepper, a little nutmeg, a quarter of a lb. of bread crumbs and a well-beaten egg. Butter a mould and line it with some boiled macaroni. Mix more macaroni with the veal mixture, fill the mould, put a plate on it and steam for ½ an hour. Turn out carefully, pour a good brown gravy around it.

Stir 3 tablespoonfuls of vinegar very gradually into 6 tablespoonfuls of oil and a dash of paprika. Add salt, if the beans have not been seasoned. The oil and vinegar will not unite perfectly. Pour gradually over a pint of cold baked beans such portions of the dressing as they will absorb, toss together and arrange on a serving dish. Make a border of sliced tomatoes around the beans and over these pour the rest of the dressing.—Janet Hill in "Boston Cooking School Magazine."

Stew together for 20 minutes ½ a can of tomatoes, 1 tablespoonful of chopped onion, 1 sprig of parsley, ½ a bay leaf, 4 cloves and enough salt and pepper to season highly. Rub through a sieve. In a clean saucepan melt together 2 tablespoonfuls of butter and 5 tablespoonfuls of flour. Add 2 cupfuls of the strained tomato and stir and cook for ten minutes. Take from the fire and set aside until cold. Flour the hands and carefully mould into small croquettes. Dip each into slightly beaten egg and roll in fine bread crumbs. Let stand for 20 minutes, then repeat the dipping and rolling in crumbs. Fry at once in very hot fat and drain on unglazed paper.—"Table Talk," Phila.

Cover a platter an inch deep with hot well-boiled rice, to which has been added 1 tablespoonful of melted butter. On this serve six well-poached eggs. Garnish with parsley.

Parboil a bunch of celery, using only the stalks; cut into two inch lengths, put them into a baking dish. Rub smooth 2 tablespoonfuls of butter and 2 of flour, then beat in the yolks of 3 eggs; stir this into 1 qt. of veal stock and pour it over the celery, cover with grated bread crumbs and dust the top with grated cheese.

Wash 1 pt. of small oysters in a little water, drain into a saucepan and put this water on to heat. As soon as it comes to a boil skim and set back. Put 3 tablespoonfuls of butter into a frying pan and when hot, put in 2 lbs. of round steak; cook ten minutes. Take out the steak and sift 1 tablespoonful of flour into the butter, stir until browned. Add the oyster liquor and boil 1 minute, season; put back the steak, cover and simmer ½ an hour, then add the oysters and 1 tablespoonful lemon juice. Boil for 1 minute and serve.

Cut ½ a lb. of cold meat into dice; wash ¼ of a cupful of barley, chop 2 onions very fine, put all into a saucepan and dredge with flour, season with salt and pepper. Add a qt. of water and simmer about 2 hours. Pare and slice 5 potatoes, add them to the stew and simmer an hour longer.

Beat 3 eggs separately. To the yolks add ½ a cup of milk, pinch of salt, pepper and ½ a cup of bread crumbs. Cut into this very carefully the well beaten whites; mix lightly. Put 1 tablespoonful of butter into a frying pan; and as soon as it is hot turn in the mixture. Set it over a good fire, being careful not to burn. When half done, set the pan in the oven for a few minutes to set the middle of the omelet. Turn onto a hot platter and serve.

Wash and parboil slices of liver, then roll each piece, in crumbs, then in beaten egg, then in crumbs again. Fry in hot lard.

Cut 1 pt. of meat into 1 inch pieces and put them into a greased baking dish. Beat 2 eggs very light, add to it 1 pint of milk and pour it gradually into 6 tablespoonfuls of flour, beating all the time. Strain, add salt and pepper and pour it over the meat. Bake an hour and serve at once.

Shell 1 can of shrimps, arrange on lettuce leaves, serve with French dressing.

Scald 1 pt. of milk with slice of onion and stalk of celery. Stir into this ¼ of a cup each of butter and flour creamed together, let cook 15 minutes, stirring until thickened and then occasionally add a dash of paprika and strain over 1 pt. of cold cooked corn beef, cut into cubes. Turn into a pudding dish and cover with half a cup of cracker crumbs, mixed with 3 tablespoonfuls of melted butter. Set into the oven to reheat and brown the crumbs.—Janet M. Hill in "Boston Cooking School Magazine."

Take the outside slices left from boiled or braised beef, cut up into small pieces and pound it thoroughly with a little butter in a mortar; add salt, pepper and a little powdered mace. Mix thoroughly. Put it into jelly glasses, pour a coating of clarified butter over the top. Cover with paper until wanted.

One gill of rice, boiled soft; when cold, rub it with a spoon. Moisten with water a gill of rice flour, and mix it with the rubbed rice. Beat 1 egg, very light, and stir in. Bake on a shallow tin plate, split and butter while hot.