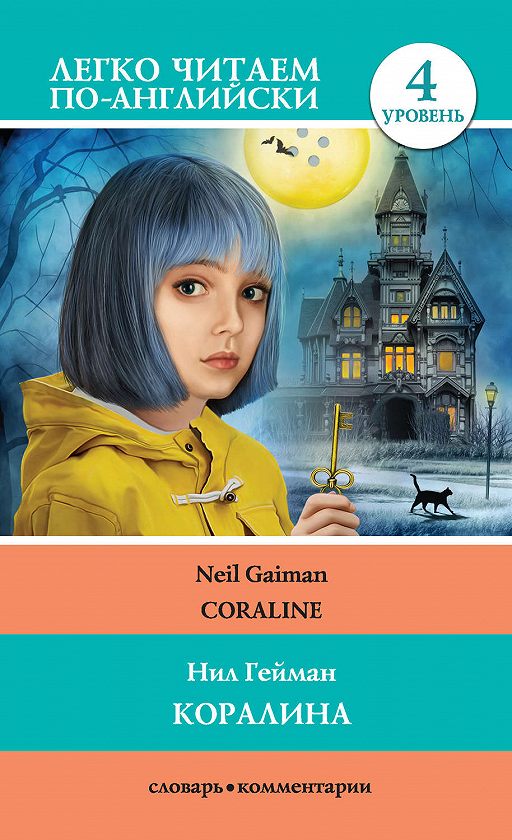 I started this for Holly

I finished it for Maddy

Coraline discovered the door a little while after they moved into the house.

It was a very old house—it had an attic under the roof and a cellar under the ground and an overgrown garden with huge old trees in it.

Coralineʼs family didnʼt own all of the house—it was too big for that. Instead they owned part of it.

There were other people who lived in the old house.

“You see, Caroline,” Miss Spink said, getting Coralineʼs name wrong, “both myself and Miss Forcible were famous actresses, in our time. We trod the boards[2], luvvy. Oh, donʼt let Hamish eat the fruitcake, or heʼll be up all night with his tummy.”

In the flat above Coralineʼs, under the roof, was a crazy old man with a big mustache. He told Coraline that he was training a mouse circus. He wouldnʼt let anyone see it.

“One day, little Caroline, when they are all ready, everyone in the whole world will see the wonders of my mouse circus. You ask me why you cannot see it now. Is that what you asked me?”

“No,” said Coraline quietly, “I asked you not to call me Caroline. Itʼs Coraline.”

Coraline didnʼt think there really was a mouse circus. She thought the old man was probably making it up.

The day after they moved in, Coraline went exploring.

She explored the garden. It was a big garden: at the very back was an old tennis court, but no one in the house played tennis and the fence around the court had holes in it and the net had mostly rotted away; there was an old rose garden, filled with stunted, flyblown rosebushes; there was a rockery that was all rocks; there was a fairy ring[3], made of squidgy brown toadstools which smelled dreadful if you accidentally trod on them.

There was also a well. On the first day Coralineʼs family moved in, Miss Spink and Miss Forcible made a point of telling Coraline how dangerous the well was, and they warned her to be sure she kept away from it. So Coraline set off to explore for it, so that she knew where it was, to keep away from it properly.

She found it on the third day, in an overgrown meadow beside the tennis court, behind a clump of trees—a low brick circle almost hidden in the high grass. The well had been covered up by wooden boards, to stop anyone falling in. There was a small knothole in one of the boards, and Coraline spent an afternoon dropping pebbles and acorns through the hole and waiting, and counting, until she heard the plop as they hit the water far below.

There was also a haughty black cat, who sat on walls and tree stumps and watched her but slipped away if ever she went over to try to play with it.

That was how she spent her first two weeks in the house—exploring the garden and the grounds.

Her mother made her come back inside for dinner and for lunch. And Coraline had to make sure she dressed up warm before she went out, for it was a very cold summer that year; but go out she did, exploring, every day until the day it rained, when Coraline had to stay inside.

“What should I do?” asked Coraline.

“Read a book,” said her mother. “Watch a video. Play with your toys. Go and pester Miss Spink or Miss Forcible, or the crazy old man upstairs.”

“No,” said Coraline. “I donʼt want to do those things. I want to explore.”

“I donʼt really mind what you do,” said Coralineʼs mother, “as long as you donʼt make a mess.”

Coraline went over to the window and watched the rain come down. It wasnʼt the kind of rain you could go out in—it was the other kind, the kind that threw itself down from the sky and splashed where it landed. It was rain that meant business, and currently its business was turning the garden into a muddy, wet soup.

Coraline had watched all the videos. She was bored with her toys, and sheʼd read all her books.

She turned on the television. She went from channel to channel to channel, but there was nothing on but men in suits talking about the stock market, and talk shows. Eventually, she found something to watch: it was the last half of a natural history program about something called protective coloration. She watched animals, birds, and insects which disguised themselves as leaves or twigs or other animals to escape from things that could hurt them. She enjoyed it, but it ended too soon and was followed by a program about a cake factory.

It was time to talk to her father.

Coralineʼs father was home. Both of her parents worked, doing things on computers, which meant that they were home a lot of the time. Each of them had their own study.

“Hello Coraline,” he said when she came in, without turning round.

“What does your mother say?”

“She says youʼre not going out in weather like that, Coraline Jones.”

“But I want to carry on exploring.”

“Then explore the flat,” suggested her father. “Look—hereʼs a piece of paper and a pen. Count all the doors and windows. List everything blue. Mount an expedition to discover the hot water tank. And leave me alone to work.”

“Can I go into the drawing room?” The drawing room was where the Joneses kept the expensive (and uncomfortable) furniture Coralineʼs grandmother had left them when she died. Coraline wasnʼt allowed in there. Nobody went in there. It was only for best.

“If you donʼt make a mess. And you donʼt touch anything.”

Coraline considered this carefully, then she took the paper and pen and went off to explore the inside of the flat.

She discovered the hot water tank (it was in a cupboard in the kitchen).

She counted everything blue (153).

Of the doors that she found, thirteen opened and closed. The other—the big, carved, brown wooden door at the far corner of the drawing room—was locked.

She said to her mother, “Where does that door go?”

“It has to go somewhere.”

Her mother shook her head. “Look,” she told Coraline.

She reached up and took a string of keys from the top of the kitchen doorframe. She sorted through them carefully, and selected the oldest, biggest, blackest, rustiest key. They went into the drawing room. She unlocked the door with the key.

Her mother was right. The door didnʼt go anywhere. It opened onto a brick wall.

“When this place was just one house,” said Coralineʼs mother, “that door went somewhere. When they turned the house into flats, they simply bricked it up. The other side is the empty flat on the other side of the house, the one thatʼs still for sale.”

She shut the door and put the string of keys back on top of the kitchen doorframe.

“You didnʼt lock it,” said Coraline.

Her mother shrugged. “Why should I lock it?” she asked. “It doesnʼt go anywhere.”

It was nearly dark outside now, and the rain was still coming down, pattering against the windows and blurring the lights of the cars in the street outside.

Coralineʼs father stopped working and made them all dinner.

Coraline was disgusted. “Daddy,” she said, “youʼve made a recipe again.”

“Itʼs leek and potato stew with a tarragon garnish and melted Gruyère cheese,” he admitted.

Coraline sighed. Then she went to the freezer and got out some microwave chips and a microwave minipizza.

“You know I donʼt like recipes,” she told her father, while her dinner went around and around and the little red numbers on the microwave oven counted down to zero.

“If you tried it, maybe youʼd like it,” said Coralineʼs father, but she shook her head.

That night, Coraline lay awake in her bed. The rain had stopped, and she was almost asleep when something went t-t-t-t-t-t. She sat up in bed.

Coraline wondered if sheʼd dreamed it, whatever it was.

It was little more than a shadow, and it scuttled down the darkened hall fast, like a little patch of night.

She hoped it wasnʼt a spider. Spiders made Coraline intensely uncomfortable.

The black shape went into the drawing room, and Coraline followed it a little nervously.

The room was dark. The only light came from the hall, and Coraline, who was standing in the doorway, cast a huge and distorted shadow onto the drawing room carpet—she looked like a thin giant woman.

Coraline was just wondering whether or not she ought to turn on the lights when she saw the black shape edge slowly out from beneath the sofa. It paused, and then dashed silently across the carpet toward the farthest corner of the room.

There was no furniture in that corner of the room.

Coraline turned on the light.

There was nothing in the corner. Nothing but the old door that opened onto the brick wall.

She was sure that her mother had shut the door, but now it was ever so slightly open. Just a crack. Coraline went over to it and looked in. There was nothing there—just a wall, built of red bricks.

Coraline closed the old wooden door, turned out the light, and went to bed.

She dreamed of black shapes that slid from place to place, avoiding the light, until they were all gathered together under the moon. Little black shapes with little red eyes and sharp yellow teeth.

They started to sing,


We are small but we are many
We are many we are small
We were here before you rose
We will be here when you fall.

Their voices were high and whispering and slightly whiney. They made Coraline feel uncomfortable.

Then Coraline dreamed a few commercials, and after that she dreamed of nothing at all.