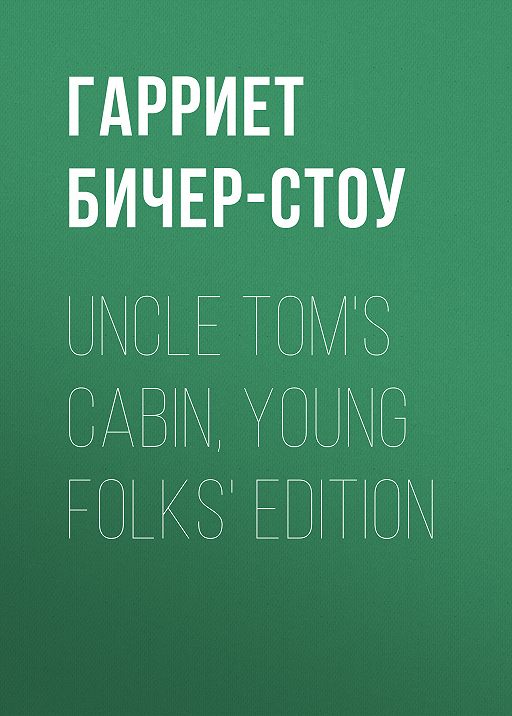 CHAPTER I
UNCLE TOM AND LITTLE HARRY ARE SOLD

VERY many years ago, instead of having servants to wait upon them and work for them, people used to have slaves. These slaves were paid no wages. Their masters gave them only food and clothes in return for their work.

When any one wanted servants he went to market to buy them, just as nowadays we buy horses and cows, or even tables and chairs.

If the poor slaves were bought by kind people they would be quite happy. Then they would work willingly for their masters and mistresses, and even love them. But very often cruel people bought slaves. These cruel people used to beat them and be unkind to them in many other ways.

It was very wicked to buy and sell human beings as if they were cattle. Yet Christian people did it, and many who were good and kind otherwise thought there was no wrong in being cruel to their poor slaves. 'They are only black people,' they said to themselves. 'Black people do not feel things as we do.' That was not kind, as black people suffer pain just in the same way as white people do.

One of the saddest things for the poor slaves was that they could never long be a happy family all together—father, mother, and little brothers and sisters—because at any time the master might sell the father or the mother or one of the children to some one else. When this happened those who were left behind were very sad indeed—more sad than if their dear one had died.

Uncle Tom was a slave. He was a very faithful and honest servant, and his master, Mr. Shelby, was kind to him. Uncle Tom's wife was called Aunt Chloe. She was Mr. Shelby's head cook, and a very good one too, she was. Nobody in all the country round could make such delicious pies and cakes as Aunt Chloe.

Uncle Tom and Aunt Chloe lived together in a pretty little cottage built of wood, quite close to Mr. Shelby's big house.

The little cottage was covered with climbing roses, and the garden was full of beautiful bright flowers and lovely fruit trees.

Uncle Tom and Aunt Chloe lived happily for many years in their little cottage, or cabin, as it was called. All day Uncle Tom used to work in the fields, while Aunt Chloe was busy in the kitchen at Mr. Shelby's house. When evening came they both went home to their cottage and their children, and were merry together.

Mr. Shelby was a good man, and kind to his slaves, but he was not very careful of his money. When he had spent all he had, he did not know what to do to get more. At last he borrowed money from a man called Haley, hoping to be able to pay it back again some day.

But that day never came. Haley grew impatient, and said, 'If you don't pay what you owe me, I will take your house and lands, and sell them to pay myself back all the money I have lent to you.'

So Mr. Shelby sold everything he could spare and gathered money together in every way he could think of, but still there was not enough.

Then Haley said, 'Give me that slave of yours called Tom—he is worth a lot of money.'

But Mr. Shelby knew that Haley was not a nice man. He knew he did not want Tom for a servant, but only wanted to sell him again, to make more money. So Mr. Shelby said, 'No, I can't do that. I never mean to sell any of my slaves, least of all Tom. He has been with me since he was a little boy.'

'Oh very well,' said Haley, 'I shall sell your house and lands, as I said I should.'

Mr. Shelby could not bear to think of that, so he agreed to let Haley have Tom. He made him promise, however, not to sell Tom again except to a kind master.

'Very well,' said Haley, 'but Tom isn't enough. I must have another slave.'

Just at this moment a little boy came dancing into the room where Mr. Shelby and Haley were talking.

He was a pretty, merry little fellow, the son of a slave called Eliza, who was Mrs. Shelby's maid.

'There now,' said Haley, 'give me that little chap, as well as Tom, and we will say no more about the money you owe me.'

'I can't,' said Mr. Shelby. 'My wife is very fond of Eliza, and would never hear of having Harry sold.'

'Oh, very well,' said Haley once more, 'I must just sell your house.'

So again Mr. Shelby gave in, and Haley went away with the promise that next morning Uncle Tom and little Harry should be given to him, to be his slaves.

Mr. Shelby was very unhappy because of what he had done. He knew his wife would be very unhappy too, and he did not know how to tell her.

He had to do it that night, however, before she went to bed.

Mrs. Shelby could hardly believe it. 'Oh, you do not mean this,' she said. 'You must not sell our good Tom and dear little Harry. Do anything rather than that. It is a wicked, wicked thing to do.

'There is nothing else I can do,' said Mr. Shelby. 'I have sold everything I can think of, and at any rate now that Haley has set his heart on having Tom and Harry, he would not take anything or anybody instead.'

Mrs. Shelby cried very much about it, but at last, though she was very, very unhappy she fell asleep.

But some one whom Mr. and Mrs. Shelby never thought of was listening to this talk.

Eliza was sitting in the next room. The door was not quite closed, so she could not help hearing what was said. As she listened she grew pale and cold and a terrible look of pain came into her face.

Eliza had had three dear little children, but two of them had died when they were tiny babies. She loved and cared for Harry all the more because she had lost the others. Now he was to be taken from her and sold to cruel men, and she would never see him again. She felt she could not bear it.

Eliza's husband was called George, and was a slave too. He did not belong to Mr. Shelby, but to another man, who had a farm quite near. George and Eliza could not live together as a husband and wife generally do. Indeed, they hardly ever saw each other. George's master was a cruel man, and would not let him come to see his wife. He was so cruel, and beat George so dreadfully, that the poor slave made up his mind to run away. He had come that very day to tell Eliza what he meant to do.

As soon as Mr. and Mrs. Shelby stopped talking, Eliza crept away to her own room, where little Harry was sleeping. There he lay with his pretty curls around his face. His rosy mouth was half open, his fat little hands thrown out over the bed-clothes, and a smile like a sunbeam upon his face.

'My baby, my sweet-one,' said Eliza, 'they have sold you. But mother will save you yet!'

She did not cry. She was too sad and sorrowful for that. Taking a piece of paper and a pencil, she wrote quickly.

'Oh, missis! dear missis! don't think me ungrateful—don't think hard of me, anyway! I heard all you and master said to-night. I am going to try to save my boy—you will not blame me I God bless and reward you for all your kindness!'

Eliza was going to run away.

She gathered a few of Harry's clothes into a bundle, put on her hat and jacket, and went to wake him.

Poor Harry was rather frightened at being waked in the middle of the night, and at seeing his mother bending over him, with her hat and jacket on.

'What is the matter, mother?' he said beginning to cry.

'Hush,' she said, 'Harry mustn't cry or speak aloud, or they will hear us. A wicked man was coming to take little Harry away from his mother, and carry him 'way off in the dark. But mother won't let him. She's going to put on her little boy's cap and coat, and run off with him, so the ugly man can't catch him.'

Harry stopped crying at once, and was good and quiet as a little mouse, while his mother dressed him. When he was ready, she lifted him in her arms, and crept softly out of the house.

It was a beautiful, clear, starlight night, but very cold, for it was winter-time. Eliza ran quickly to Uncle Tom's cottage, and tapped on the window.

'I'm running away, Uncle Tom and Aunt Chloe—carrying off my child,' said Eliza. 'Master sold him.'

'Sold him?' they both echoed, lifting up their hands in dismay.

'Yes, sold him,' said Eliza. 'I heard master tell missis that he had sold my Harry, and you, Uncle Tom. The man is coming to take you away to-morrow.'

At first Tom could hardly believe what he heard. Then he sank down, and buried his face in his hands.

'The good Lord have pity on us!' said Aunt Chloe. 'What has Tom done that master should sell him?'

'He hasn't done anything—it isn't for that. Master don't want to sell; but he owes this man money. If he doesn't pay him it will end in his having to sell the house and all the slaves. Master said he was sorry. But missis she talked like an angel. I'm a wicked girl to leave her so, but I can't help it.