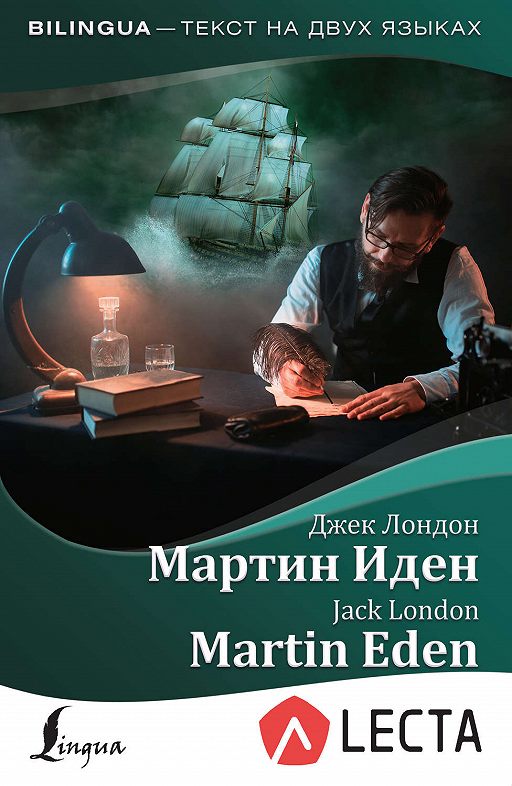 He opened the door with a key and went in, followed by a young fellow who awkwardly removed his cap. He wore rough clothes of a sailor. He did not know what to do with his cap.

The wide rooms seemed too narrow for him. His heavy arms hung at his sides. He did not know what to do with those arms and hands. He watched the easy walk of the other in front of him, and for the first time realized that his walk was different from that of other men. The sweat burst through the skin of his forehead in tiny beads, and he paused and mopped his bronzed face with his handkerchief.

“Hold on, Arthur, my boy,” he said, attempting to mask his anxiety with facetious utterance. “This is too much for me now. You know I didn’t want to come, and I guess your family doesn’t want to see me at all.”

“That’s all right,” was the reassuring answer. “You mustn’t be frightened at us. We’re just homely people – Hello, there’s a letter for me.”

He stepped back to the table, opened the envelope, and began to read, giving the stranger an opportunity to recover himself. And the stranger understood and appreciated.

An oil painting drew his attention. There was beauty, and it drew him irresistibly. He forgot his awkward walk and came closer to the painting, very close. He did not know painting. He had seen oil paintings, it was true, in the show windows of shops, but the glass of the windows did not allow him to come closer.

Then he saw the books on the table. He glanced at the titles and the authors’ names, read fragments of text, caressing the volumes with his eyes and hands, and, once, recognized a book he had read. He took a volume of Swinburne and began to read. Twice he closed the book on his forefinger to look at the name of the author. Swinburne! he must remember that name. But who was Swinburne? Was he dead a hundred years or so, like most of the poets? Or was he alive still, and writing? He turned to the title-page . . . yes, he had written other books; well, he will go to the library in the morning and try to get some Swinburne’s books. He went back to the text and lost himself. He did not notice that a young woman had entered the room. Suddenly he heard Arthur’s voice saying:

He closed the book. “Mr. Eden!” Everybody called him just “Eden,” or “Martin Eden,” or just “Martin,” all his life. And “Mister!” It was something!

And then he turned and saw the girl. She was a pale, ethereal creature, with wide, spiritual blue eyes and a wealth of golden hair. He did not know how she was dressed, except that the dress was as wonderful as she. She was like a pale gold flower upon a slender stem. No, she was a spirit, a divinity, a goddess. She looked him straight in the eyes as she shook hands, frankly, like a man. The women he had known did not shake hands that way. Never had he seen such a woman.

He waved his hand and muttered that he had done nothing at all. He sat down on the edge of the chair, greatly worried by his hands.

“You have such a scar on your neck, Mr. Eden,” the girl was saying. “How did it happen?”

“A Mexican with a knife, miss,” he answered. “It was just a fight.”

“Oh,” the girl said, in a faint, far voice, and he noticed the shock in her sensitive face.

He felt a shock himself. There was a brief pause in the conversation.

“This man Swineburne,” he began.

“Swineburne,” he repeated, with the same mispronunciation. “The poet.”

“Yes, that’s the chap,” he stammered, his cheeks hot again. “How long since he died?”

“Why, I haven’t heard that he was dead.” She looked at him curiously. “Where did you meet him?”

“I never saw him,” was the reply. “But I read some of his poetry out of that book there on the table just before you come in. How do you like his poetry?”

And she began to talk quickly and easily upon the subject that he had suggested. Here was intellectual life, he thought, and here was beauty. He forgot himself and stared at her with hungry eyes. The books were true. There were such women in the world. She was one of them.

“Now Longfellow – ” she was saying.

She nodded her head and smiled, and he felt, somehow, that her smile was tolerant, pitifully tolerant.

“Excuse me, miss. I guess that I don’t know much about such things. But I will know it…”

It sounded like a threat. His voice was determined, his eyes were flashing.

“I think you will know it,” she finished with a laugh. “You are very strong.”

“Yes, I’m not an invalid,” he said. “But most of what you were saying I can’t digest, you see. I like books and poetry, but I’ve never thought about them. That’s why I can’t talk about them. How did you learn all this?”

“By going to school, and by studying,” she answered.

“I went to school when I was a kid,” he began to object.

“Yes; but I mean high school, and lectures, and the university.”

“You’ve gone to the university?” he demanded in frank amazement.

At the same moment a woman was entering the room. The girl left her chair and came to the woman. They kissed each other. That must be her mother, he thought. She was a tall, blond woman, slender, and stately, and beautiful.

Their journey to the dining room was a nightmare to him. But at last he had made it. The array of knives and forks frightened him. Well, he must be careful here.

He glanced around the table. Opposite him was Arthur, and Arthur’s brother, Norman. How they loved each other, the members of this family! His nature wanted love. It was an organic demand of his life. He had not known that he needed love.

He was glad that Mr. Morse was not there. The father is too much for him, he felt sure. He had to eat as he had never eaten before, to handle strange tools.

He was unaware of what he ate. It was merely food. Eating was an aesthetic function. It was an intellectual function, too. His mind was stirred. He heard words that were meaningless to him, and other words that he had seen only in books. He said, “Yes, miss,” and “No, miss,” to her, and “Yes, ma’am,” and “No, ma’am,” to her mother. And when she or her mother addressed him as “Mr. Eden,” he was glowing and warm with delight.

“It was brave of you to help Arthur – and you a stranger,” she said tactfully.

“It was nothing at all,” he said. “Those boys were looking for trouble. They began to insult Arthur, and – ”

He paused. Arthur continued the story, for the twentieth time, of his adventure with the drunken hooligans on the ferry-boat and of how Martin Eden had rescued him.

Martin Eden nodded. He began to tell the company about his sea life, what he saw and what he knew.

For the first time he became himself. And while he talked, the girl looked at him with startled eyes. His fire warmed her. She wanted to lean toward this burning, blazing man that was like a volcano full of strength, and health. Ruth saw horror in her mother’s eyes – fascinated horror, it was true, but none the less horror. This man from the darkness was evil. Her mother saw it, and her mother was right. She will trust her mother’s judgment in this as she had always trusted it in all things.

Later, at the piano, she played for him. And she, glancing at him across her shoulder, saw something in his face.

“I hope you’ll visit us again,” she said, as he was saying good night to her brothers.

He pulled on his cap, and was gone.

“Well, what do you think of him?” Arthur demanded.

“He is interesting,” she answered. “How old is he?”

“Twenty – almost twenty-one. I asked him this afternoon. I didn’t think he was that young.”

And I am three years older, was the thought in her mind as she kissed her brothers goodnight.

Martin Eden took out a brown rice paper and a pinch of Mexican tobacco. “By God!” he said aloud, in a voice of awe and wonder. “By God!” he repeated. And yet again he murmured, “By God!”

He had met the Woman. He had sat next to her at table. He had felt her hand in his, he had looked into her eyes. This feeling of the divine startled him. He had never believed in the divine. He had always been irreligious. There was no life beyond; it was here and now, then darkness everlasting. But what he had seen in her eyes was soul – immortal soul that never dies. Nobody had given him the message of immortality. But she had. She had whispered it to him the first moment she looked at him. He did not deserve such fortune. He was like a drunken man, murmuring aloud: “By God! By God!”

He caught a car that was going to Berkeley. It was crowded with young men who were singing songs. He studied them curiously. They were university boys. They went to the same university that she did, they could know her, could see her every day if they wanted to.

The car came to the two-story building with the proud sign, HIGGINBOTHAM’S CASH STORE. Bernard Higginbotham had married his sister, and he knew him well. He climbed the stairs to the second floor. Here lived his brother-in-law.

He entered a room, where sat his sister and Bernard Higginbotham. Martin Eden never looked at him without repulsion. What his sister had found in that man was a mystery.

Martin controlled himself and closed the door softly behind him.

“He is drunk,” he proclaimed in a hoarse whisper. “I told you. A fine example to the children! If he does it again, he’s got to get out.”

“Has he paid last week’s board?”

She nodded, then added, “He still has some money.”

“When is he going to sea again?”

“He was over to San Francisco yesterday looking for a ship,” she answered. “But he’s got money at the moment.”

“I can give him a job: to drive the wagon,” her husband said. “Tom went away.”

“I told you you’d lose him,” she cried out. “You paid him very little.”

“Now look here, old woman, for the thousandth time I’ve told you to keep your nose out of the business. I won’t tell you again.”

“He pays his board,” was the retort. “And he’s my brother, what do you want?”

“I will charge him for gas: he is reading in bed,” her husband answered.

Mrs. Higginbotham made no reply. Her husband was triumphant.