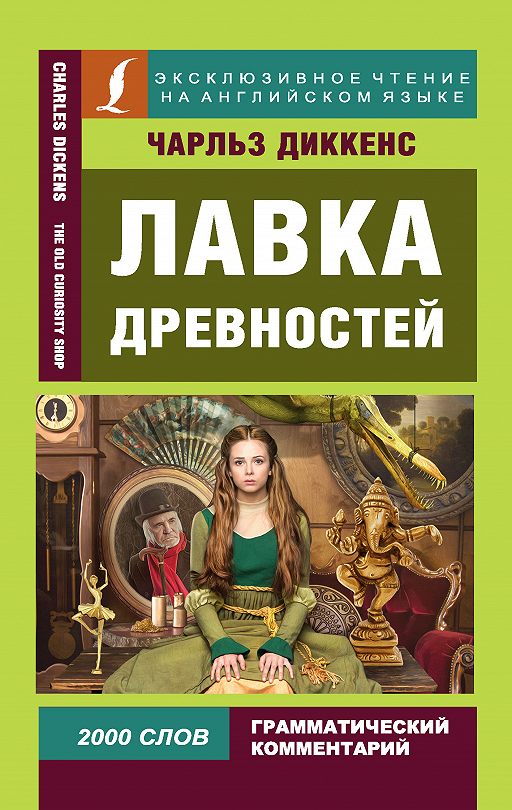 A little girl stopped at a door and knocked at it. A part of this door was of glass, unprotected by any shutter. When she had knocked twice or thrice, there was a noise as if some person were moving inside. It was an old man with long grey hair; he held the light above his head and looked before him. There was something of that delicate mould which one could notice in the child. Their bright blue eyes were certainly alike, but his face was deeply furrowed.

The place was one of the receptacles for old and curious things. There were suits of mail standing like ghosts in armour, here and there; fantastic carvings from monkish cloisters; rusty weapons of various kinds; figures in china[1], and wood, and iron, and ivory; tapestry, and strange furniture. The old man was wonderfully suited to the place.

“Why bless thee, child,” said the old man pitting the girl on the head, “didn’t you miss your way? What if I had lost you, Nelly[2]?

“I will always find my way back to you, grandfather,” said the child boldly, “never fear.”

The child took a candle and tripped into her little room.

There was a knock at the door; and Nelly, bursting into a hearty laugh, said it was no doubt dear Kit[3], come back at last.

The old man took up a candle and went to open the door. When he came back, Kit was at his heels[4]. Kit was a shock-headed shambling awkward lad with an uncommonly wide mouth, very red cheeks, a turned-up nose, and a very comical expression of face. He stopped short at the door, twirled in his hand a perfectly round old hat without any vestige of a brim.

“Why then[5], it was a goodish stretch, master,” returned Kit.

“Did you find the house easily?”

“Why then, not over and above easy, master,” said Kit.

“Of course you have come back hungry?”

“Why then, you’re right, master,” was the answer.

The lad had a remarkable manner of standing sideways[6] as he spoke, and thrusting his head forward over his shoulder. Kit carried a large slice of bread and meat, and a mug of beer, into a corner.

“Ah!” said the old man, “Nell, I say, the time is coming when we shall be rich. It must come at last; a very long time, but it surely must come. It has come to other men who do nothing. When will it come to me?”

“I am very happy as I am, grandfather,” said the child.

“Tush, tush!” returned the old man. “The time must come, I am very sure it must.”

The girl cheerfully helped the old man with his cloak, and, when he was ready, took a candle to light him out[7]. The old man folded her in his arms and bade God bless her.

“Sleep soundly, Nell,” he said in a low voice, “and angels guard your bed! Do not forget your prayers, my sweet.”

“No indeed,” answered the child fervently, “they make me feel so happy!”

“That’s well; I know they do; they should,” said the old man. “Bless thee a hundred times! Early in the morning I shall be home.”

With this, they separated. The child opened the door. The old man’s figure was soon beyond her sight.

A young man stood lounging with his foot upon a chair, and regarded the old man with a contemptuous sneer. He was a young man of one-and-twenty; well made[8], and certainly handsome, though his manner and even his dress had a dissipated, insolent air.

“Here I am,” said the young fellow, “and here I shall stop, I tell you again that I want to see my sister!’’

“Ah! You can’t change the relationship,” returned the other. “If you could, you’d have done it long ago. I want to see my sister, that you keep here, poisoning her mind with your sly secrets. I know you had the money you can hardly count. I want to see her; and I will.”

“Here’s a moralist to talk of poisoned minds!” cried the old man. “You are a liar, sir, who knows how dear she is to me, and seeks to wound me.”

“Well,” said the young fellow, “There’s a friend of mine waiting outside, and as it seems that I may have to wait some time, I’ll call him in.”

Saying this, he stepped to the door, and looking down the street beckoned several times to some person.

“There. It’s Dick Swiveller[9],” said the young fellow, pushing him in. “Sit down, Swiveller.”

“But is the old man agreeable?” said Mr. Swiveller in an undertone[10].

“Sit down,” repeated his companion.

“Fred[11]!” said Mr. Swiveller, “We may be good and happy without riches, Fred. Say not another word.”

Mr. Swiveller was in a state of disorder which strongly induced the idea that he had gone to bed in it. It consisted of a brown body-coat[12] with a great many brass buttons up the front, and only one behind; a bright check neckerchief, a plaid waistcoat, soiled white trousers, and a very limp hat, worn with the wrong side foremost, to hide a hole in the brim. The breast of his coat was ornamented with an outside pocket from which there peeped forth the cleanest end of a very large handkerchief. He displayed no gloves, and carried a yellow cane. With all these Mr. Swiveller leaned back in his chair with his eyes fixed on the ceiling.

“Fred,” said Mr. Swiveller, speaking in the same audible whisper as before, “is the old man friendly?”

“What does it matter?” returned his friend peevishly.

“Yes, of course. What do I care whether he is or not?”

“It’s a devil of a thing, gentlemen,” said Mr. Swiveller, “when relations fall out and disagree. Why should a grandson and grandfather peg away at each other with mutual violence when all might be bliss and concord? Why not join hands and forget it?”

“Hold your tongue,” said his friend.

“Gentlemen,” replied Mr. Swiveller, “Here is a jolly old grandfather who says to his wild young grandson, ‘I have brought you up and educated you, Fred.’ The wild young grandson makes answer to this and says, ‘You’re as rich as rich can be; you’re saving up piles of money for my little sister that lives with you.’ Then the plain question is, isn’t it a pity that this state of things should continue, and how much better would it be for the old gentleman to hand over a reasonable amount of tin, and make it all right and comfortable?”

“Why do you hunt and persecute me, God help me?” said the old man turning to his grandson. “Why do you bring your profligate companions here? How often am I to tell you that I am poor?”

“How often am I to tell you,” returned the other, looking coldly at him, “that I know better?”

“You have chosen your own path,” said the old man. “Follow it. Leave Nell and I to toil and work.”

“Nell will be a woman soon,” returned the other, “and she’ll forget her brother unless he shows himself sometimes.”

“But,” said the old man dropping his voice, “but we are poor; and what a life it is! Nothing goes well with it! Hope and patience, hope and patience!”

These words were uttered in too low a tone to reach the ears of the young men. Mr. Swiveller suggested the propriety of an immediate departure, when the door opened, and the child herself appeared.

The child was followed by an elderly man, quite a dwarf, though his head and face were large enough for the body of a giant. His black eyes were restless, sly, and cunning; his complexion was one of that kind which never looks clean. But the most terrible was his ghastly smile, which revealed the few discoloured fangs that were yet scattered in his mouth, and gave him the aspect of[13] a dog. His dress consisted of a large high-crowned hat, a worn dark suit, a pair of capacious shoes, and a dirty white neckerchief. His hair was black, cut short and straight upon his temples[14]. His hands were very dirty; his finger-nails were crooked, long, and yellow.

“Ah!” said the dwarf, “that should be your grandson, neighbour!”

“And that?” said the dwarf, pointing to Dick Swiveller.

“Some friend of his, as welcome here as he,” said the old man.

“Well, Nelly,” said the young fellow aloud. “Do they teach you to hate me, eh?”

“To love me, perhaps?” pursued her brother with a sneer.

“To do neither. They never speak to me about you. Indeed they never do. But I love you dearly, Fred,” said the child.

“I do indeed, and always will,” the child repeated with great emotion, “but if you would leave off vexing him and making him unhappy, then I could love you more.”

“I see!” said the young man: “There get you away now you have said your lesson.”

Fred remained silent, the girl entered her little room and closed the door. Then he turned to the dwarf, and said abruptly:

“Listen, Mr. Quilp, then,” pursued the other. “You have some influence with my grandfather there.”

“And know about a few of his mysteries and secrets.”

“Then let me tell him, through you, that I will come into and go out of this place as often as I like, so long as he keeps Nell here. Let him say so. I will see her when I want. That’s my point. I came here today to see her, and I’ll come here again fifty times with the same object and always with the same success. I have done so, and now my visit’s ended. Come, Dick.”

The dwarf appeared quite horrible, with his monstrous head and little body, as he rubbed his hands slowly round, and round, and round again with something fantastic, dropping his shaggy brows and cocking his chin in the air.

“Here,” he said, putting his hand into his breast[17]; “I brought it myself, this gold is too large and heavy for Nell to carry in her bag. I would like to know in what good investment all these gold sinks. But you are a deep man, and keep your secret close.”

“My secret!” said the other with a haggard look. “Yes, you’re right I keep it close very close.”

He said no more, but, taking the money, turned away with a slow uncertain step, and pressed his hand upon his head. The dwarf went away.

Nell brought some needle-work[18] to the table, and sat by the old man’s side. The old man laid his hand on hers, and spoke aloud.

“Nell,” he said; “there must be good fortune for you I do not ask it for myself, but for you only. It will come at last!”

The girl looked cheerfully into his face, but made no answer.