A Treatise on Domestic Economy; For the Use of Young Ladies at Home and at School 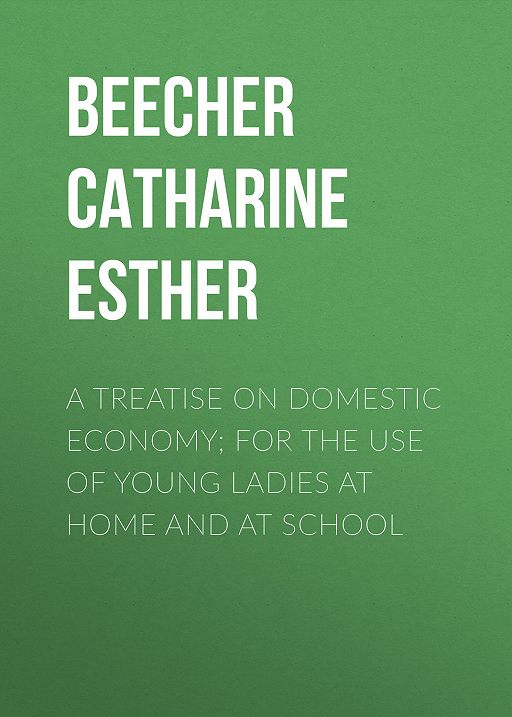 Catharine Esther Beecher
A Treatise on Domestic Economy; For the Use of Young Ladies at Home and at School

whose intelligence and virtues have inspired admiration and respect, whose experience has furnished many valuable suggestions, in this work, whose approbation will be highly valued, and whose influence, in promoting the object aimed at, is respectfully solicited, this work is dedicated, by their friend and countrywoman,

TO THE THIRD EDITION

The author of this work was led to attempt it, by discovering, in her extensive travels, the deplorable sufferings of multitudes of young wives and mothers, from the combined influence of poor health, poor domestics, and a defective domestic education. The number of young women whose health is crushed, ere the first few years of married life are past, would seem incredible to one who has not investigated this subject, and it would be vain to attempt to depict the sorrow, discouragement, and distress experienced in most families where the wife and mother is a perpetual invalid.

The writer became early convinced that this evil results mainly from the fact, that young girls, especially in the more wealthy classes, are not trained for their profession. In early life, they go through a course of school training which results in great debility of constitution, while, at the same time, their physical and domestic education is almost wholly neglected. Thus they enter on their most arduous and sacred duties so inexperienced and uninformed, and with so little muscular and nervous strength, that probably there is not one chance in ten, that young women of the present day, will pass through the first years of married life without such prostration of health and spirits as makes life a burden to themselves, and, it is to be feared, such as seriously interrupts the confidence and happiness of married life.

The measure which, more than any other, would tend to remedy this evil, would be to place domestic economy on an equality with the other sciences in female schools. This should be done because it can be properly and systematically taught (not practically, but as a science), as much so as political economy or moral science, or any other branch of study; because it embraces knowledge, which will be needed by young women at all times and in all places; because this science can never be properly taught until it is made a branch of study; and because this method will secure a dignity and importance in the estimation of young girls, which can never be accorded while they perceive their teachers and parents practically attaching more value to every other department of science than this. When young ladies are taught the construction of their own bodies, and all the causes in domestic life which tend to weaken the constitution; when they are taught rightly to appreciate and learn the most convenient and economical modes of performing all family duties, and of employing time and money; and when they perceive the true estimate accorded to these things by teachers and friends, the grand cause of this evil will be removed. Women will be trained to secure, as of first importance, a strong and healthy constitution, and all those rules of thrift and economy that will make domestic duty easy and pleasant.

To promote this object, the writer prepared this volume as a text-book for female schools. It has been examined by the Massachusetts Board of Education, and been deemed worthy by them to be admitted as a part of the Massachusetts School Library.

It has also been adopted as a text-book in some of our largest and most popular female schools, both at the East and West.

The following, from the pen of Mr. George B. Emmerson, one of the most popular and successful teachers in our country, who has introduced this work as a text-book in his own school, will exhibit the opinion of one who has formed his judgment from experience in the use of the work:

"It may be objected that such things cannot be taught by books. Why not? Why may not the structure of the human body, and the laws of health deduced therefrom, be as well taught as the laws of natural philosophy? Why are not the application of these laws to the management of infants and young children as important to a woman as the application of the rules of arithmetic to the extraction of the cube root? Why may not the properties of the atmosphere be explained, in reference to the proper ventilation of rooms, or exercise in the open air, as properly as to the burning of steel or sodium? Why is not the human skeleton as curious and interesting as the air-pump; and the action of the brain, as the action of a steam-engine? Why may not the healthiness of different kinds of food and drink, the proper modes of cooking, and the rules in reference to the modes and times of taking them, be discussed as properly as rules of grammar, or facts in history? Are not the principles that should regulate clothing, the rules of cleanliness, the advantages of early rising and domestic exercise, as readily communicated as the principles of mineralogy, or rules of syntax? Are not the rules of Jesus Christ, applied to refine domestic manners and preserve a good temper, as important as the abstract principles of ethics, as taught by Paley, Wayland, or Jouffroy? May not the advantages of neatness, system, and order, be as well illustrated in showing how they contribute to the happiness of a family, as by showing how they add beauty to a copy-book, or a portfolio of drawings? Would not a teacher be as well employed in teaching the rules of economy, in regard to time and expenses, or in regard to dispensing charity, as in teaching double, or single entry in bookkeeping? Are not the principles that should guide in constructing a house, and in warming and ventilating it properly, as important to young girls as the principles of the Athenian Commonwealth, or the rules of Roman tactics? Is it not as important that children should be taught the dangers to the mental faculties, when over-excited on the one hand, or left unoccupied on the other, as to teach them the conflicting theories of political economy, or the speculations of metaphysicians? For ourselves, we have always found children, especially girls, peculiarly ready to listen to what they saw would prepare them for future duties. The truth, that education should be a preparation for actual, real life, has the greatest force with children. The constantly-recurring inquiry, 'What will be the use of this study?' is always satisfied by showing, that it will prepare for any duty, relation, or office which, in the natural course of things, will be likely to come.

"We think this book extremely well suited to be used as a text-book in schools for young ladies, and many chapters are well adapted for a reading book for children of both sexes."

To this the writer would add the testimony of a lady who has used this work with several classes of young girls and young ladies. She remarked that she had never known a school-book that awakened more interest, and that some young girls would learn a lesson in this when they would study nothing else. She remarked, also, that when reciting the chapter on the construction of houses, they became greatly interested in inventing plans of their own, which gave an opportunity to the teacher to point out difficulties and defects. Had this part of domestic economy been taught in schools, our land would not be so defaced with awkward, misshapen, inconvenient, and, at the same time, needlessly expensive houses, as it now is.

Although the writer was trained to the care of children, and to perform all branches of domestic duty, by some of the best of housekeepers, much in these pages is offered, not as the result of her own experience, but as what has obtained the approbation of some of the most judicious mothers and housekeepers in the nation. The articles on Physiology and Hygiene, and those on horticulture, were derived from standard works on these subjects, and are sanctioned by the highest authorities.

The American Housekeeper's Receipt Book is another work prepared by the author of the Domestic Economy, in connexion with several experienced housekeepers, and is designed for a supplement to this work. On pages 354a and 354b will be found the Preface and Analysis of that work, the two books being designed for a complete course of instructions on every department of Domestic Economy.

The copyright interest in these two works is held by a board of gentlemen appointed for the purpose, who, after paying a moderate compensation to the author for the time and labour spent in preparing these works, will employ all the remainder paid over by the publishers, to aid in educating and locating such female teachers as wish to be employed in those portions of our country, which are most destitute of schools.

The contract with the publisher provides that the publisher shall guaranty the sales and thus secure against any losses for bad debts, for which he shall receive five per cent. He shall charge twenty per cent. for commissions paid to retailers, and also the expenses of printing, paper, and binding, at the current market prices, and make no other charges. The net profits thus determined are then to be divided equally, the publishers taking one half, and paying the other half to the board above mentioned.