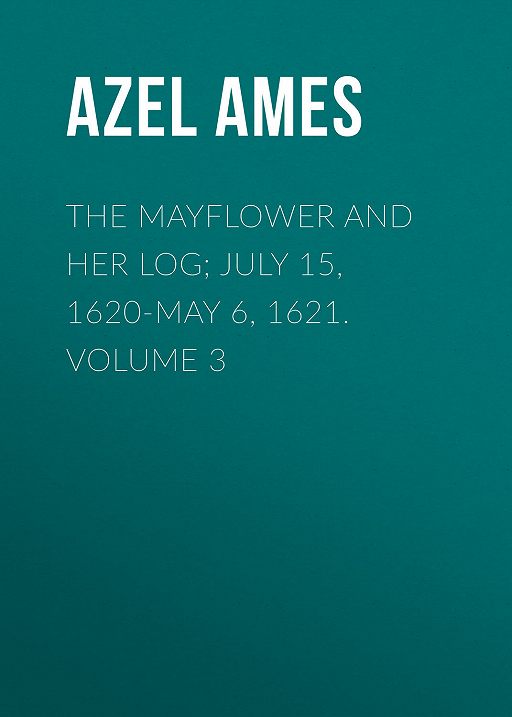 CHAPTER V
THE OFFICERS AND CREW OF THE MAYFLOWER

The officers and crew of the MAY-FLOWER were obviously important factors in the success of the Pilgrim undertaking, and it is of interest to know what we may concerning them. We have seen that the "pilot," John Clarke, was employed by Weston and Cushman, even before the vessel upon which he was to serve had been found, and he had hence the distinction of being the first man "shipped" of the MAY-FLOWER'S complement. It is evident that he was promptly hired on its being known that he had recently returned from a voyage to Virginia in the cattle-ship FALCON, as certain to be of value in the colonists' undertakings.

Knowing that the Adventurers' agents were seeking both a ship and a master for her, it was the natural thing for the latter, that he should propose the Captain under whom he had last sailed, on much the same voyage as that now contemplated. It is an interesting fact that something of the uncertainty which for a time existed as to the names and features of the Pilgrim barks attaches the names and identity of their respective commanders. The "given" name of "Master" Reynolds, "pilott" and "Master" of the SPEED WELL, does not appear, but the assertion of Professor Arber, though positive enough, that "the Christian name of the Captain of the MAY-FLOWER is not known," is not accepted by other authorities in Pilgrim history, though it is true that it does not find mention in the contemporaneous accounts of the Pilgrim ship and her voyage.

There is no room for doubt that the Captain of the FALCON—whose release from arrest while under charge of piracy the Earl of Warwick procured, that he might take command of the above-named cattle-ship on her voyage to Virginia, as hereinafter shown—was Thomas Jones. The identity of this man and "Master Jones" who assumed command of the MAY-FLOWER—with the former mate of the FALCON, John Clarke, as his first officer—is abundantly certified by circumstantial evidence of the strongest kind, as is also the fact that he commanded the ship DISCOVERY a little later.

With the powerful backing of such interested friends as the Earl of Warwick and Sir Ferdinando Gorges, undoubtedly already in league with Thomas Weston, who probably made the contract with Jones, as he had with Clarke, the suggestion of the latter as to the competency and availability of his late commander would be sure of prompt approval, and thus, in all probability, Captain Thomas Jones, who finds his chief place in history—and a most important one—as Master of the MAY-FLOWER, came to that service.

In 1619, as appears by Neill, the Virginia Company had one John Clarke in Ireland, "buying cattle for Virginia." We know that Captain Jones soon sailed for Virginia with cattle, in the FALCON, of 150 tons, and as this was the only cattle ship in a long period, we can very certainly identify Clarke as the newly-hired mate of the MAY-FLOWER, who, Cush man says (letter of June 11/21, 1620), "went last year to Virginia with a ship of kine." As 1620 did not begin until March 25, a ship sailing in February would have gone out in 1619, and Jones and Clarke could easily have made the voyage in time to engage for the MAY-FLOWER in the following June. "Six months after Jones's trip in the latter" (i.e. after his return from the Pilgrim voyage), Neill says, "he took the DISCOVERY (60 tons) to Virginia, and then northward, trading along the coast. The Council for New England complained of him to the Virginia Company for robbing the natives on this voyage. He stopped at Plymouth (1622), and, taking advantage of the distress for food he found there, was extortionate in his prices. In July, 1625, he appeared at Jamestown, Virginia, in possession of a Spanish frigate, which he said had been captured by one Powell, under a Dutch commission, but it was thought a resumption of his old buccaneering practices. Before investigation he sickened and died."

That Jones was a man of large experience, and fully competent in his profession, is beyond dispute. His disposition, character, and deeds have been the subject of much discussion. By most writers he is held to have been a man of coarse, "unsympathetic" nature, "a rough sea-dog," capable of good feeling and kindly impulses at times, but neither governed by them nor by principle. That he was a "highwayman of the seas," a buccaneer and pirate, guilty of blood for gold, there can be no doubt. Certainly nothing could justify the estimate of him given by Professor Arber, that "he was both fair-minded and friendly toward the Pilgrim Fathers," and he certainly stands alone among writers of reputation in that opinion. Jones's selfishness,

[Bradford himself—whose authority in the matter will not be doubted—says (Historie, Mass. ed. p. 112): "As this calamitie, the general sickness, fell among ye passengers that were to be left here to plant, and were basted ashore and made to drinke water, that the sea-men might have ye more bear [beer] and one in his sickness desiring but a small can of beare it was answered that if he were their own father he should have none." Bradford also shows (op. cit. p. 153) the rapacity of Jones, when in command of the DISCOVERY, in his extortionate demands upon the Plymouth planters, notwithstanding their necessities.]

threats, boorishness, and extortion, to say nothing of his exceedingly bad record as a pirate, both in East and West Indian waters, compel a far different estimate of him as a man, from that of Arber, however excellent he was as a mariner. Professor Arber dissents from Goodwin's conclusion that Captain Jones of the DISCOVERY was the former Master of the MAY- FLOWER, but the reasons of his dissent are by no means convincing. He argues that Jones would not have accepted the command of a vessel so much smaller than his last, the DISCOVERY being only one third the size of the MAY-FLOWER. Master-mariners, particularly when just returned from long and unsuccessful voyages, especially if in bad repute,—as was Jones,– are obliged to take such employment as offers, and are often glad to get a ship much smaller than their last, rather than remain idle. Moreover, in Jones's case, if, as appears, he was inclined to buccaneering, the smaller ship would serve his purpose—as it seems it did satisfactorily. Nor is the fact that Bradford speaks of him—although previously so well acquainted—as "one Captain Jones," to be taken as evidence, as Arber thinks, that the Master of the DISCOVERY was some other of the name. Bradford was writing history, and his thought just then was the especial Providence of God in the timely relief afforded their necessities by the arrival of the ships with food, without regard to the individuals who brought it, or the fact that one was an acquaintance of former years. On the other hand, Winslow—in his "Good Newes from New England"– records the arrival of the two ships in August, 1622, and says, "the one as I take [recollect] it, was called the DISCOVERY, Captain Jones having command thereof," which on the same line of argument as Arber's might be read, "our old acquaintance Captain Jones, you know"! If the expression of Bradford makes against its being Captain Jones, formerly of the MAY- FLOWER, Winslow's certainly makes quite as much for it, while the fact which Winslow recites, viz. that the DISCOVERY, under Jones, was sailing as consort to the SPARROW, a ship of Thomas Weston,—who employed him for the MAY-FLOWER, was linked with him in the Gorges conspiracy, and had become nearly as degenerate as he,—is certainly significant. There are still better grounds, as will appear in the closely connected relations of Jones, for holding with Goodwin rather than with Arber in the matter. The standard authority in the case is the late Rev. E. D. Neill, D. D., for some years United States consul at Dublin, who made very considerable research into all matters pertaining to the Virginia Companies, consulting their original records and "transactions," the Dutch related documents, the "Calendars of the East India Company," etc. Upon him and his exhaustive work all others have largely drawn,—notably Professor Arber himself,—and his conclusions seem entitled to the same weight here which Arber gives them in other relations. Dr. Neill is clearly of opinion that the Captains of the MAY-FLOWER and the DISCOVERY were identical, and this belief is shared by such authorities in Pilgrim literature as Young, Prince, Goodwin, and Davis, and against this formidable consensus of opinion, Arber, unless better supported, can hardly hope to prevail.

The question of Jones's duplicity and fraud, in bringing the Pilgrims to land at Cape Cod instead of the "neighbor-hood of Hudson's River," has been much mooted and with much diversity of opinion, but in the light of the subjoined evidence and considerations it seems well-nigh impossible to acquit him of the crime—for such it was, in inception, nature, and results, however overruled for good.

The specific statements of Bradford and others leave no room for doubt that the MAY-FLOWER Pilgrims fully intended to make their settlement somewhere in the region of the mouth of "Hudson's River.