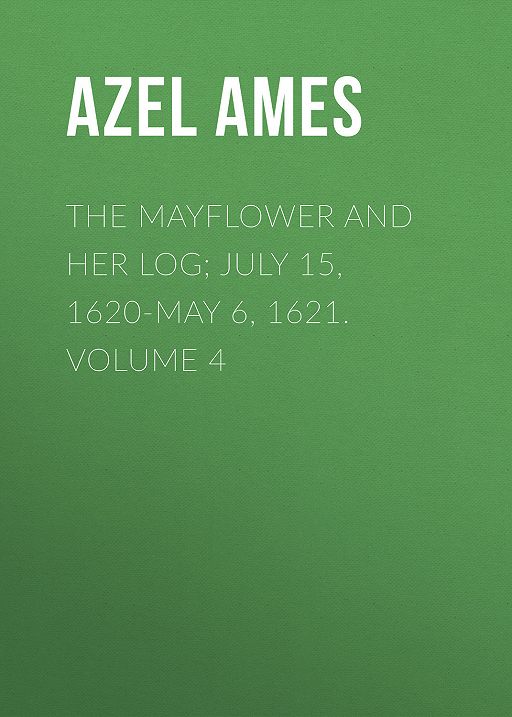 The passenger list of the SPEEDWELL has given us the names of the Leyden members of the company which, with the cooperation of the associated Merchant Adventurers, was, in the summer of 1620, about to emigrate to America.

Though it is not possible, with present knowledge, positively to determine every one of those who were passengers in the MAY-FLOWER from London to Southampton, most of them can be named with certainty.

Arranged for convenience, so far as possible, by families, they were:—

Master Robert Cushman, the London agent of the Leyden company,

There is a possibility that Thomas Rogers and his son, Joseph, who are usually accredited to the Leyden company, were of the London contingent, and sailed from there, though this is contra-indicated by certain collateral data.

It is possible, also, of course, that any one or more of the English colonists (with a few exceptions—such as Cushman and family, Mullens and family, the More children and others—known to have left London on the MAY-FLOWER) might have joined her (as did Carver and Alden, perhaps Martin and family) at Southampton, but the strong presumption is that most of the English passengers joined the ship at London.

It is just possible, too, that the seamen, Alderton (or Allerton), English, Trevore, and Ely, were hired in London and were on board the MAY-FLOWER when she left that port, though they might have been employed and joined the ship at either Southampton, Dartmouth, or Plymouth. It is strongly probable, however, that they were part, if not all, hired in Holland, and came over to Southampton in the pinnace.

Robert Cushman—the London agent (for more than three years) of the Leyden congregation, and, in spite of the wickedly unjust criticism of Robinson and others, incompetent to judge his acts, their brave, sagacious, and faithful servant—properly heads the list.

Bradford says: "Where they find the bigger ship come from London, Mr. Jones, Master, with the rest of the company who had been waiting there with Mr. Cushman seven days." Deacon Carver, probably from being on shore, was not here named. In a note appended to the memoir of Robert Cushman (prefatory to his Discourse delivered at Plymouth, New England, on "The Sin and Danger of Self-Love") it is stated in terms as follows: "The fact is, that Mr. Cushman procured the larger vessel, the MAY-FLOWER, and its pilot, at London, and left in that vessel." The statement—though published long after the events of which it treats and by other than Mr. Cushman—we know to be substantially correct, and the presumption is that the writer, whoever he may have been, knew also.

Sailing with his wife and son (it is not probable that he had any other living child at the time), in full expectation that it was for Virginia, he encountered so much of ungrateful and abusive treatment, after the brethren met at Southampton,—especially at the hands of the insufferable Martin, who, without merit and with a most reprehensible record (as it proved), was chosen over him as "governor" of the ship,—that he was doubtless glad to return from Plymouth when the SPEEDWELL broke down. He and his family appear, therefore, as "MAY-FLOWER passengers," only between London and Plymouth during the vexatious attendance upon the scoundrelly Master of the SPEEDWELL, in his "doublings" in the English Channel. His Dartmouth letter to Edward Southworth, one of the most valuable contributions to the early literature of the Pilgrims extant, clearly demonstrates that he was suffering severely from dyspepsia and deeply wounded feelings. The course of events was his complete vindication, and impartial history to-day pronounces him second to none in his service to the Pilgrims and their undertaking. His first wife is shown by Leyden records to have been Sarah Reder, and his second marriage to have occurred May 19/June 3, 1617, [sic] about the time he first went to England in behalf of the Leyden congregation.

Mrs. Mary (Clarke)-Singleton Cushman appears only as a passenger of the MAY-FLOWER on her channel voyage, as she returned with her husband and son from Plymouth, England, in the SPEEDWELL.

Thomas Cushman, it is quite clear, must have been a son by a former wife, as he would have been but a babe, if the son of the latest wife, when he went to New England with his father, in the FORTUNE, to remain. Goodwin and others give his age as fourteen at this time, and his age at death is their warrant. Robert Cushman died in 1625, but a "Mary, wife [widow?] of Robert Cushman, and their son, Thomas," seem to have been remembered in the will of Ellen Bigge, widow, of Cranbrooke, England, proved February 12, 1638 (Archdeaconry, Canterbury, vol. lxx. leaf 482). The will intimates that the "Thomas" named was "under age" when the bequest was made. If this is unmistakably so (though there is room for doubt), then this was not the Thomas of the Pilgrims. Otherwise the evidence is convincing.

Master Christopher Martin, who was made, Bradford informs us, the treasurer-agent of the Planter Company, Presumably about the time of the original conclusions between the Adventurers and the Planters, seems to have been appointed such, as Bradford states, not because he was needed, but to give the English contingent of the Planter body representation in the management, and to allay thereby any suspicion or jealousy. He was, if we are to judge by the evidence in hand concerning his contention and that of his family with the Archdeacon, the strong testimony that Cushman bears against him in his Dartmouth letter of August 17, and the fact that there seems to have been early dissatisfaction with him as "governor" on the ship, a very self-sufficient, somewhat arrogant, and decidedly contentious individual. His selection as treasurer seems to have been very unfortunate, as Bradford indicates that his accounts were in unsatisfactory shape, and that he had no means of his own, while his rather surprising selection for the office of "governor" of the larger ship, after the unpleasant experience with him as treasurer- agent, is difficult to account for, except that he was evidently an active opponent of Cushman, and the latter was just then in disfavor with the colonists. He was evidently a man in the prime of life, an "Independent" who had the courage of his convictions if little discretion, and much of that energy and self-reliance which, properly restrained, are excellent elements for a colonist. Very little beside the fact that he came from Essex is known of him, and nothing of his wife. He has further mention hereafter.

Solomon Prower is clearly shown by the complaint made against him by the Archdeacon of Chelmsford, the March before he sailed on the MAY- FLOWER, to have been quite a youth, a firm "Separatist," and something more than an ordinary "servant." He seems to have been summoned before the Archdeacon at the same time with young Martin (a son of Christopher), and this fact suggests some nearer relation than that of "servant." He is sometimes spoken of as Martin's "son," by what warrant does not appear, but the fact suggests that he may have been a step-son.